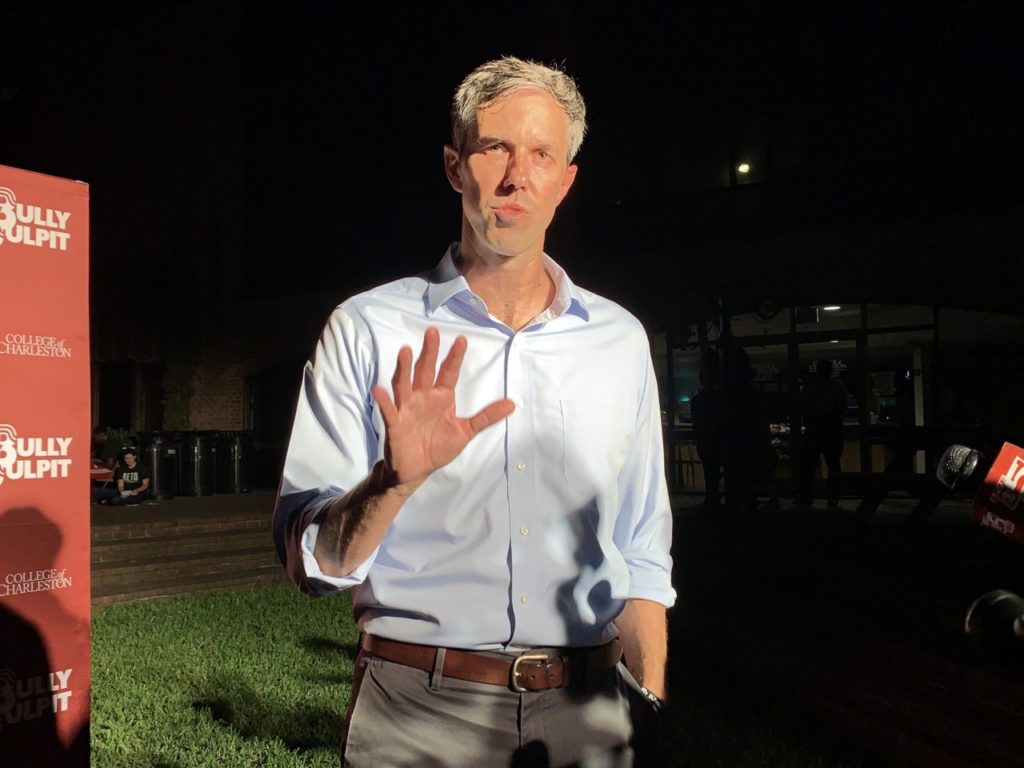 CHARLESTON, South Carolins — Breitbart News asked former Rep. Beto O’Rourke (D-TX), Democratic presidential hopeful, about his remark Monday evening at the College of Charleston in which he repeated the “very fine people” hoax about President Donald Trump’s reaction to the riots in Charlottesville, Virginia, in 2017.

During the event, part of the College of Charleston’s “Bully Pulpit” series, O’Rourke claimed that President Trump is responsible for acts of white supremacist violence in the United States. He misquoted Trump several times, claiming, for example, that the president had referred to immigrants as an “infestation” and “animals” (he was referring to gangs, specifically the El Salvadoran gang MS-13, which rapes, murders, and mutilates its victims).

O’Rourke claimed that Trump’s rhetoric was “giving permission for exactly what took place in El Paso on August 3rd” (i.e. the mass shooting that killed 22 people). He added: “And lest you think this is an isolated strain of his hatred — this is the same man who called Klansmen, and neo-Nazis, and white supremacists ‘very fine people’ days after they were marching in the streets of Charlottesville, Virginia, chanting: ‘Jews, you will not replace us!’”

O’Rourke also said that the U.S. needed a president who would “heal” rather than “inflame” national tensions.

In a press conference afterwards, Breitbart News asked O’Rourke why he continued to misquote the president:

Breitbart News: The president, Trump, after Charlottesville, said that he condemned the white supremacists and the neo-Nazis “totally.” Are you aware that you are misquoting him, or partially quoting him — no quoting the full extent of his remarks in Charlottesville? Are you concerned that that might inflame tensions rather than heal divisions?

Beto O’Rourke: No. I believe in the truth, and in being honest about what the president was doing. And it’s not just that he referred to Klansmen as “very fine people,” it’s that he attempted to ban all people of one religion from this country. We’re constantly warned of an “invasion” of killers, and rapists, and animals, from Central America and Mexico, though we know that they commit crimes at a far lower rate than those who are born in this country. This is a very coordinated attack on minorities in this country, on the most vulnerable and the defenseless, for political gain for the president. And he knows full well that it not only offends our sensibilities as a country, it is leading to violence and the taking of lives, as we saw in El Paso.

Beto O’Rourke: He has openly courted the support of white supremacists and that’s a matter of fact and a matter of record. He has repeatedly, though given the opportunity, refused to disavow their support. I reference — and you can check the tape on this one — at a rally in Florida in May, when someone says, “Shoot them!”, referring to immigrants, he laughs and smiles and he joked about that. If that is not a total failure of leadership, and a total inducement to violence and hatred, I don’t know what is. And you can also check a rise in hate crimes in this country, every single year that he’s been a candidate, or in office, and in fact in those counties that hosted a Trump rally, you saw a more than 200% increase in hate crimes there. He is very much responsible for much of the violence, the hatred, and the racism that you see in this country.

Almost everything O’Rourke claimed was false or misleading, in addition to the false claim that he called neo-Nazis “very fine people”:

O’Rourke also told the gathering at the College of Charleston, most of whom were students, that white supremacy was “manifest in every part of American life.”