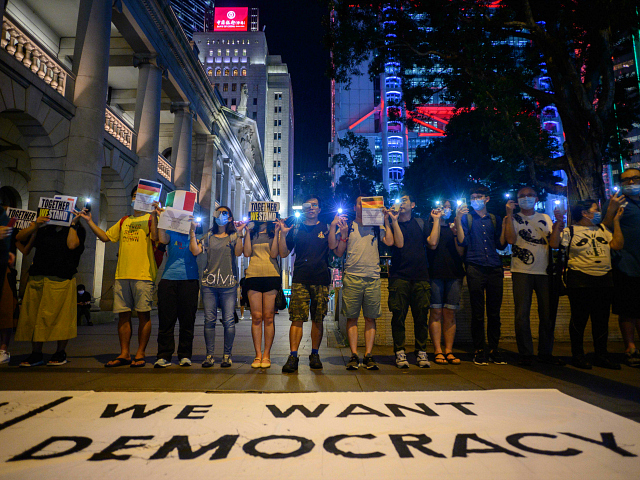 The demonstration was nicknamed, “The Hong Kong Way,” a homage to the 370-mile “Baltic Way” human chain formed exactly 30 years ago by about two million people in Latvia, Lithuania, and Estonia to demand liberation from the Soviet Union.

Protests tonight in Hong Kong are insane. Human chain goes on for miles. An American flag at the center. pic.twitter.com/ymdOsPnmyh

Organizers described the Hong Kong human chain as “a show of solidarity” and “a plea for international support.” Many participants held placards thanking passersby for supporting their quest for “freedom and democracy.” Some expressed a desire to counter the Chinese Communist Party’s claims that the protesters are violent thugs or agents of chaos working for hostile foreign powers.

The human chain was described by demonstrators as a commitment to peaceful expression with numerous families and children involved but also as a gesture of defiance to Beijing and the Hong Kong administration of chief executive Carrie Lam. A potentially much more contentious demonstration at the international airport is planned for the weekend.

A group of protesters also climbed Hong Kong’s famous Lion Rock and shined lights down on the city, some of them using the lights on their smartphones, in a more aggressive show of defiance against the authorities.

Earlier on Friday, an estimated 5,000 Hong Kong accountants walked out of their jobs to join a silent protest march, defying pleas from their employers and even offers of free lunch if they stayed on the job.

“I think the fact that this afternoon over 5,000 participants joined the march tells the world that we are not intimidated,” said lawmaker Kenneth Leung Kai-cheong, an organizer of the demonstration. He noted it was the first time since 1997 that members of Hong Kong’s vital accounting sector have joined a protest march in such numbers.