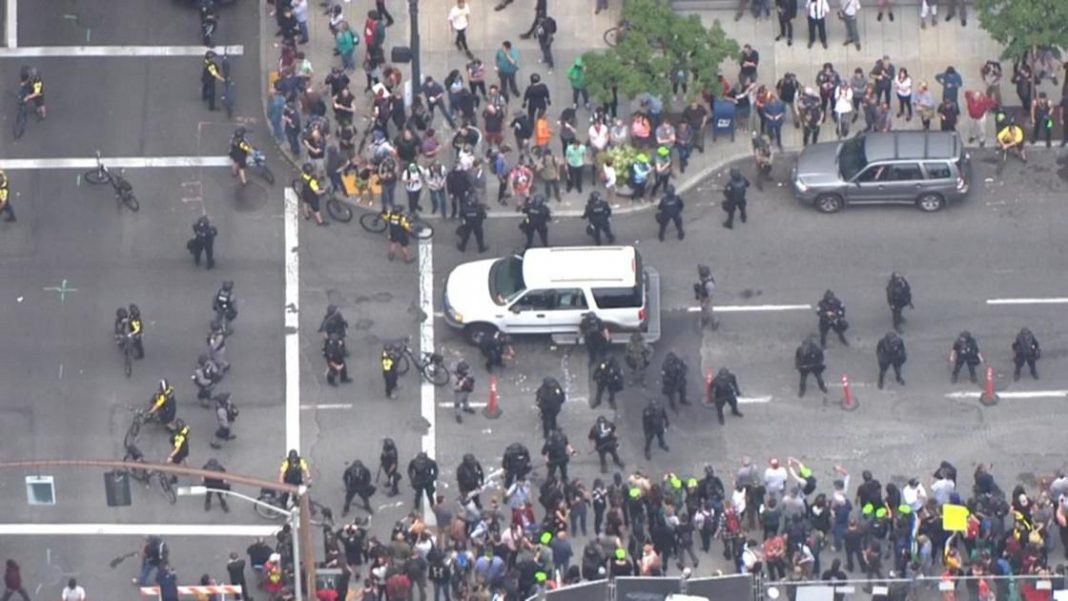 PORTLAND, OR (KPTV) – Large crowds of demonstrators gathered in Portland on Saturday, as had been expected for weeks.

By late Saturday afternoon, the situation had been declared a “civil disturbance” by police.

Crowds began forming on both sides of the Morrison Bridge by 11 a.m. Groups then marched through the streets in the hours that followed.

Police estimated 1,200 people participated in Saturday’s demonstrations. Multiple arrests were made as the day went on.

Police said Naito Parkway was quickly shut down between the Morrison and Hawthorne bridges as the rallies started Saturday morning, before reopening around noon. The Hawthorne Bridge and other downtown roads had been preemptively closed earlier Saturday morning.

Various roads were blocked throughout the day as the marches went on.

FOX 12 crews at the scene reported that some demonstrators began to leave the area around 1 p.m.

A large group of people then crossed the Burnside Bridge to the east side of Portland, while many others remained downtown. Police repeatedly warned demonstrators to remain on sidewalks or face arrest.

Demonstrators continued marching into late Saturday afternoon, blocking traffic at various points and leading to multiple people being taken into custody by police.

Demonstrators are now facing off with police on SW Park behind @Nordstrom pic.twitter.com/Y4kccNNcos

By early Saturday afternoon, police confirmed at least three arrests had been made in connection with the demonstrations. By after 3 p.m., there had been at least 13 arrests.

No other details were released about those arrests.

At least one injured person was taken to the hospital, according to police. Multiple others were treated by medics.

Air 12 captured video of a clash involving protesters on and outside of a bus downtown.

A Portland Police Bureau sound truck advised crowds throughout the day that they needed to obey all laws, stay out of the street and remain in the park or on the sidewalks.

“No violence will be tolerated,” according to a PPB statement.

Officers said people were attempting to “infiltrate opposing groups” as the rallies began to grow.

Right-wing rally organizer Joe Biggs of Florida told FOX 12 he believed their demonstrations were both peaceful and successful. He said his group spread the word to head home early in the afternoon.

Protesters on each side of Saturday’s demonstrations said they believed the city and police showed favoritism to the other side.

Police said bottles were thrown at officers during the demonstrations Saturday.

Police telling protesters under Morrison Bridge to get out of the street or you may be arrested. #fox12oregon pic.twitter.com/B1mhAs96Zg

Protesters gathering in the street, despite @PortlandPolice announcing, “If you are in the street you may be subject to arrest on disorderly conduct.” pic.twitter.com/YSzrBbWssr

Police and city leaders had been preparing for weeks for dueling rallies and demonstrations in downtown Portland. President Donald Trump tweeted Saturday that, “Portland is being watched very closely.”

FOX 12 will continue to update this story.

Nancy Pelosi Has More Eggs, Nuts, D*cK Than Half of DC Combined in B**ch Slapping Trump