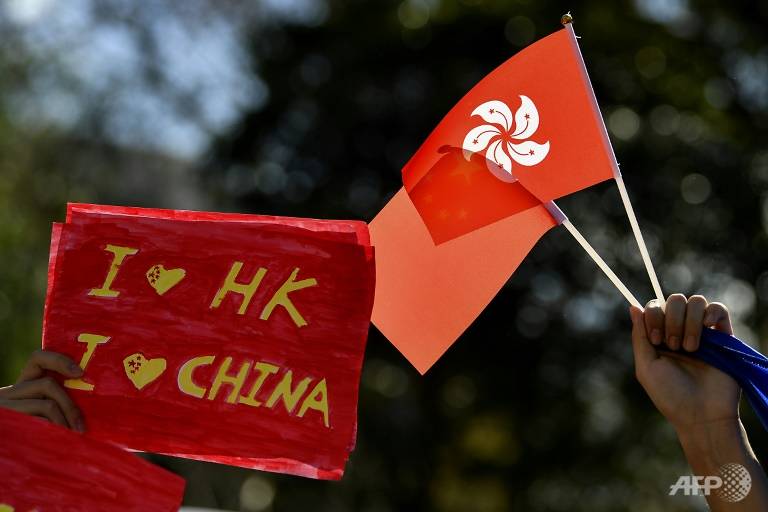 SYDNEY: Hundreds of pro-Beijing demonstrators marched through Sydney on Saturday (Aug 17) in response to a growing number of rallies in support of the Hong Kong protests as tensions between the two groups increasingly flare in Australia.

They marched through the city chanting “One China”, waving the Chinese flag and holding placards saying “Stop riots end violence in Hong Kong”.

“There has been a lot of violence and violent protests in Hong Kong,” Sydney-based lawyer and rally organiser who asked only to be called Zhao told AFP. “And Hong Kong people have suffered from that and we want to voice our call for peace and order in Hong Kong.”

Police had to escort a lone supporter of the Hong Kong protests from the Sydney event, after he was set upon by a mob of angry demonstrators.

Police had issued a warning on Saturday after small scuffles erupted between supporters and opponents of the Hong Kong protests on Friday evening.

“We respect the right of the community to express their views peacefully and lawfully but will not tolerate those who break the law or engage in antisocial or violent behavior,” a Victoria police spokeswoman said in an e-mailed statement.

The police said that they interviewed two men in relation to “unlawful assault” and released them pending summons, after pushing and shoving took place at the rally organised in support of the Hong Kong protesters.

Australian media reported the rally attracted 600 people at its peak. No injuries were reported.

“We understand that there will be different ideas,” a leader of the pro-Hong Kong protesters camp Dennis Chui told AFP after the confrontation on Friday.

“(But) freedom and democracy are core values in Australia and we have to respect this,” he added.

On Saturday, more than 100 people gathered in downtown Melbourne for another rally in support of protesters in Hong Kong. The Guardian reported that a handful of people began shouting at the group but police escorted them from the rally.

Similar small protests took place on Friday and Saturday in other Australian cities, and another rally in support of the Hong Kong protests in Sydney is planned for Sunday.

With the Asian financial hub plunged into crisis by months of protests, several small public rallies of support by Hong Kong students have been held at Australian universities.

These have angered some mainland Chinese students and have led to several heated confrontations and scuffles on campus.

China’s Brisbane consulate praised the “spontaneous patriotism” of pro-Beijing students after a clash at one university.

It immediately drew a sharp rebuke from Canberra, which warned diplomats against undermining fundamental rights or “encouraging disruptive or potentially violent behaviour”.