Home Conservative Life God Save the Cathedral? In England, Some Offer Mini Golf or Giant... 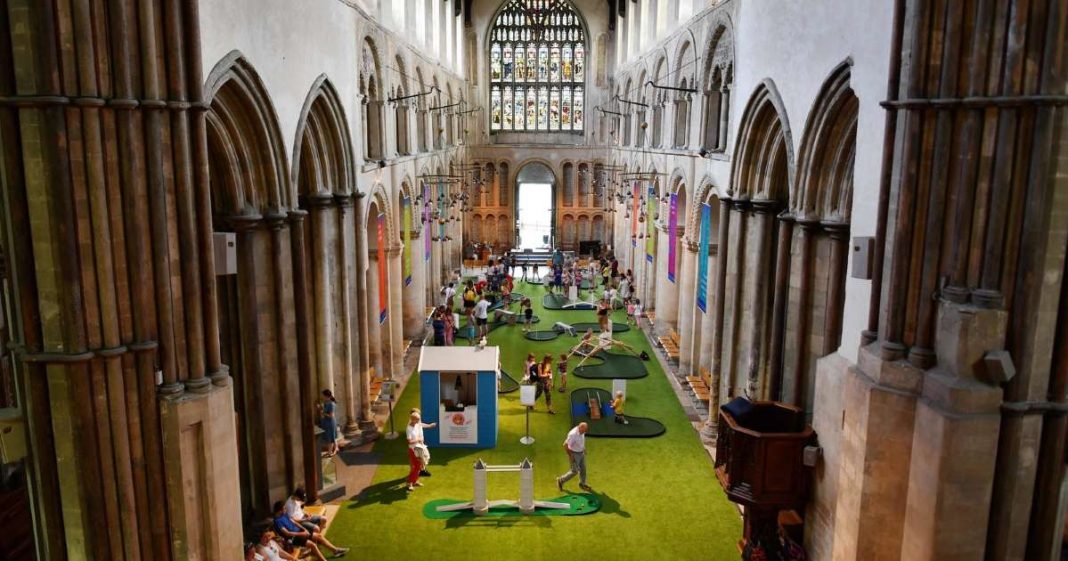 LONDON — The hallowed nave of a medieval church, with its stained glass windows and soaring arches, is usually thought of as a place for prayer and quiet reflection. Now, apparently, it is also a place for a slide four stories tall.

© Ben Stansall/Agence France-Presse — Getty Images
The bridge-themed mini-golf course set up in the nave of Rochester Cathedral in southeast England.

This summer, visitors to some of England’s most imposing and ancient cathedrals will find carnival rides, a mini golf course, a lunar landscape and a lifelike model of the Earth dangling from the ceiling.

Inside Norwich Cathedral in the east of England, a colorful, 55-foot-tall slide — known as a helter skelter — winds past the 12th-century stone pillars. The Rev. Canon Andy Bryant, Norwich Cathedral’s canon for mission, said it offered visitors a new perspective on the ornate ceilings, and on the faith more generally.

“This is a deliberate attempt to help people engage with our cathedral,” he said. “There is this idea that the helter skelter makes it all brash and noisy, but people are going on to see the cathedral in all of its glory.”

After years of falling attendance for the Church of England, the amusement park atmosphere on display at some cathedrals shows the lengths the church is going to, as it tries to pull in more people by projecting a more inclusive, less forbidding image.

Mr. Bryant said he was inspired to install the carnival slide after visiting the Sistine Chapel two years ago and admiring Michelangelo’s handiwork on the ceiling. It made him think of Norwich Cathedral’s own ceiling, adorned with medieval carvings called bosses that depict scenes from the Bible, and lament the fact that visitors could not see them close up.

Now, for 2 pounds, about $2.50, people can climb to the top of the tower and take a slide down while admiring the church.

Services continue as normal, and this Sunday’s sermon will be delivered from atop the ride.

Mr. Bryant said the reception had been overwhelmingly positive since the tower was installed last week as part of “Seeing it Differently,” an 11-day event at the cathedral that includes several immersive installations. Comments on Norwich Cathedral’s social media accounts seem to support that idea, with dozens of positive posts applauding the installation.

“We are sharing our building with lots of new people and having conversations about faith,” Mr. Bryant said. “The cathedral is full of smiling, happy people.”

But not everyone has been smiling, and the installation has (unsurprisingly) proved divisive. One commenter on the cathedral’s Facebook page denounced it as “trivializing” and “spiritually bankrupt.” Another, in a letter to The Guardian, argued that if Anglicanism wanted to be truly inclusive it would focus less on gimmicks and instead allow Christians in same-sex relationships to celebrate their weddings in its churches.

The number of British people who identify as members of the Church of England has dropped by more than half in recent years, to 14 percent in 2018 from 31 percent in 2002, according to figures from NatCen, a social research institute. Regular Sunday attendance at Anglican churches in Britain fell by 15 percent from 2007 to 2017, according to the most recent statistics from the Church of England.

While Mr. Bryant said attendance numbers were strong at Norwich Cathedral, and the installation there was simply about creating a space for reflection, it is part of a larger trend that has seen cathedrals try nontraditional activities to attract more people.

The Rev. Adrian Dorber, dean of Lichfield Cathedral, told the BBC the initiatives were not “cheap marketing tricks” but rather decisions “made out of serious pastoral concerns.”

“We are faced with a missionary situation of trying to connect people with the transcendent when we know from British social attitudes, people have given up on it,” he said. “I think the raid we can make on people’s consciousness and the way he can help people into some kind of relationship with a sacred building or sacred space is to be applauded and not condemned.”

Lichfield Cathedral, in England’s West Midlands, has a space-themed installation this summer in honor of the 50th anniversary of the Apollo 11 lunar landing, allowing visitors to walk along a reproduction of the surface of the moon.

At Peterborough Cathedral, in the Midlands, a model of the moon was suspended from the ceiling last year, and this year a model of Earth, created by the same artist, Luke Jerram, will be on display from next week through mid-September. The replica uses high-resolution NASA imagery to give a sense of the Earth as seen from space, and visitors pay a small fee to see the exhibition.

From the end of July to the beginning of September, visitors to Rochester Cathedral in southeastern England can play a round of mini golf in the church’s medieval nave. The nine-hole course has a bridge theme, which church leaders say was intended to spark conversations about spiritual bridge-building.

The golf course has also had a mixed reception, with many people who live in the area offering their thoughts on a social media post about the event. Some called it disrespectful, and argued it made it impossible to worship. Others disagreed.

“I think it’s great, the church is for everyone and the Cathedral is reaching out to the local community,” wrote Rachel Pearce, a Rochester resident. “There are still plenty of places in the Cathedral for quiet prayer and seeing families coming and enjoying themselves is good.”

The Rev. Gavin Ashenden, a former Anglican clergyman who once served as a chaplain to the Queen, has criticized the displays in England’s cathedrals as a “mockery.”

“We experience a saturation of stimulation and distraction in everyday life,” he wrote in a blog post. “It is almost as if the pace and pleasure of life set out to make reflection and prayer impossible. The one place one might be free of this could be, ought to be, a cathedral.”

But Mr. Bryant, of Norwich Cathedral, maintained that churches must be places for “the whole of life.”

“We have serious and solemn things happen here and heartbreaking things here. And we can also have joyful things,” he said. “And it’s right that we should celebrate all of those things in God’s place.

“We need to celebrate the whole of humanity.”