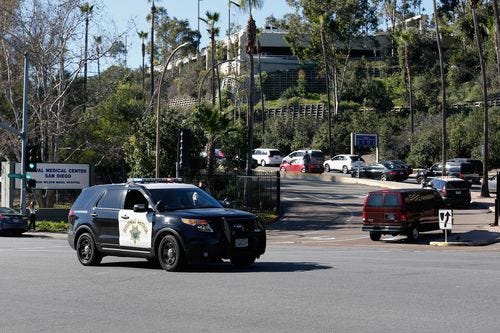 The troopers allege their department-issued vehicles have a faulty exhaust and/or heating, ventilation and air conditioning system that allow “exhaust odor and gases, including carbon monoxide — an odorless, toxic gas, to enter the passenger compartment of the vehicles while in use.” As a result, the lawsuit filed in Clark County Superior Court said, the vehicles cause headaches, dizziness, nausea and potentially life-threatening situations.

In the lawsuit, troopers allege that the “hazardous defect” has resulted in numerous complaints to the National Highway Traffic Safety Administration and the opening of a federal investigation into the vehicles. The lawsuit also notes that “Ford has recently issued an emission recall notice for all Ford Interceptor SUVs built from 2011-18.”

“The defect is not new to Ford,” the lawsuit says. As early as 2012, Ford had “issued Technical Service Bulletins to its exclusive network of dealers, recognizing the presence of exhaust odors and fumes.”

In addition, the lawsuit noted the federal traffic safety investigation summary reports “three crash events and 25 injury incidents citing a total of 41 injuries. The alleged injuries … range from unspecified to loss of consciousness with a majority indicating nausea, headaches or light-headedness. One police incident alleged a crash with related injuries, and a second police incident reported a physiological injury allegedly from carbon monoxide exposure. Another reported police incident resulted in a rollover crash event with injuries.”

Ford spokesman Mike Levine said Monday in a statement to the Free Press: “As we have previously said, carbon monoxide concerns in Police Interceptor Utilities are related to unsealed holes from the installation of police equipment by third parties after the vehicle was purchased.”

A Ford Interceptor SUV operated by the California Highway Patrol outside Naval Medical Center San Diego in January 2016. Ford is experiencing reports of fumes in the cabin of these vehicles. (Photo: Sean M. Haffey, Getty Images)

Newport Beach police officer Brian McDowell was responding to a nonemergency call when he passed out behind the wheel of his 2014 Ford Explorer police cruiser and crashed into a tree, reported CBS News. “I just think, plus or minus 1 second I maybe wouldn’t be here on this Earth for my kids,” he told the network in 2017.

Cops ‘live in these cruisers’

That year, police departments added carbon monoxide detectors in their vehicles. “They live in these cruisers for, you know, eight hours at a time, maybe longer,” said Capt. Shawn Steele of the fire department in Auburn, Massachusetts, where, at one point, a third of the town’s cruisers were taken out of service, CBS News reported.

The lawsuit filed this month faults Ford for its “pre-production testing, design failure mode analysis and consumer complaints to dealers and NHTSA” and then concealing the defect from the law enforcement officers.

“Current plaintiffs are troopers who were issued the Ford Explorer Interceptors as their regular patrol vehicles,” the lawsuit says. “Plaintiffs were advised that the vehicles were safe to drive and that there were no problems which would cause them any hazard, injury or harm. Plaintiffs detected exhaust fumes within the passenger compartment of their vehicles while driving and plaintiffs have suffered headaches, nausea, foggy thinking and flu-like symptoms. … Trooper (Randall) Cashatt, has suffered permanent neurological damage which has prevented him from continuing his job as a Washington State Patrol trooper.”

During a Florida Better Business Bureau proceeding on Jan. 2, 2015, Ford’s representative said, “We do feel that it’s a design issue, not a defect … It’s simply a vent leading somewhere where it doesn’t need to be; and, you know, it’s just being set in a certain way that’s — that’s allowing it to draw it into the — into the vehicle,” according to a transcript cited in the Washington State lawsuit.

Ford’s Levine said Monday: “That statement was made in error by a contractor of Ford at a Better Business Bureau proceeding involving an alleged exhaust odor. These vehicles are safe. Ford has thoroughly tested vehicles and has not found carbon monoxide levels that exceed what people are exposed to every day.”

The lawsuit claims that Ford has been unable to do more than offer a “Band-Aid fix” that continues to “warp and fail again over time.”

In October 2018, the CBS-affiliate in Seattle KIRO-TV reported Cashatt, then a 20-year veteran trooper, said his 2014 Ford Explorer Police Interceptor made him so ill, “I remember thinking that I was going to die.”

NHTSA told the Free Press in January 2018 that Ford’s “customer satisfaction campaign does not bring closure to this issue.”

More than 1,300 Ford Explorer owners have reported issues to the federal safety officials, who began investigating in 2016.

In January 2018, the nonprofit Center for Auto Safety sent a letter to Ford CEO Jim Hackett renewing an October 2017 request for the Dearborn-based company to recall 1.33 million Explorers from model years 2011-17 for suspected carbon monoxide leaks.

In July 2017, federal transportation officials expanded their probe into reports of exhaust odors in vehicle compartments and exposure to carbon monoxide that may be linked to crashes and injuries. The oversight agency said at the time it was aware of the growing complaints and crashes that may have been linked to exposure to carbon monoxide and dozens of injuries among police and civilian vehicles.

Ford on Monday noted that NHTSA’s 2017 report said, by that time, that “no substantive data or actual evidence … has been obtained supporting a claim that any of the alleged injury or crash allegations were the result of carbon monoxide poisoning, the alleged hazard.”

On Monday, NHTSA released the following statement to the Free Press: