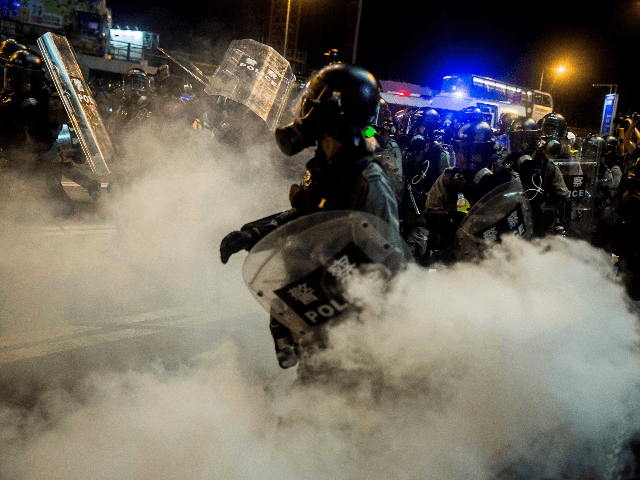 “The research figures show the widespread use of tear gas by police poses a real threat to public health,” Wong Cheuk-pang, one of the researchers who led the study into effects of police use of tear gas on journalists, said at a press conference Friday, according to the HKFP.

The researchers reportedly interviewed over 170 journalists covering the protests about their health experiences following their presence at events where police used tear gas. “After police used tear gas on July 28 in Sheung Wan, 96.2 percent of respondents said they had difficulty breathing, persistent coughing or coughed up blood,” the HKFP noted. A majority (72.6 percent) said they developed rashes and other skin issues following their presence there. Some said they experienced second-degree burns. At least one person developed pneumonia after being exposed to tear gas, the researchers said.

On the same day, in the suburbs of Yuen Long, police fired so much tear gas elderly residents of a nursing home, where someone had accidentally left a window open, filmed the tear gas entering the building and hurting the residents, sparking outrage online. No evidence has surfaced linking the affected in the nursing home to the protest movement.

Journalists documenting the protests – whose participants have been largely peaceful, while Hong Kong police have attacked with tear gas and pepper spray and masked mobs have beaten them with sticks – have endured significant assaults while present for the events. During the first pro-China mob attack, in Yuen Long in July, the South China Morning Post reported that at least four journalists received beatings for attempting to cover the assault.

A peaceful protest had concluded in Yuen Long on July 21 when the protesters made their way to the Mass Transit Rail (MTR) platform to head home. As they approached the platform, located in a shopping mall, a mob of an estimated 100-150 people wearing surgical masks and carrying metal rods began beating anyone they saw wearing black, the color of the protests. Authorities told the public that 45 people were hospitalized in the aftermath of that incident. Police took over half an hour to respond to emergency calls and videos taken by witnesses showed members of the mob chatting calmly with police as the beatings occurred. Police only arrested 12 people but confirmed protesters’ suspicions that they were linked to triads, Hong Kong’s notorious organized crime groups.

One of the four reporters beaten, a female journalist working with Stand News, was broadcasting live from the scene when the mob began beating her on camera.

“Covering a news event is a journalist’s duty. Because of the work of journalists, the public is able to understand the truth,” a statement from the Hong Kong News Executives’ Association following the Yuen Long attack read. “To blatantly attack or threaten journalists who are reporting is a serious threat to freedom of press and speech.”

Since then, journalists have repeatedly been caught in the crossfire between police and protesters, falling victim particularly to tear gas attacks, which have escalated significantly even since the July 28 protests that left some reporters coughing blood. Police confirmed this week that, between the beginning of the protests on June 9 and August 4, they fired 1,000 rounds of tear gas at the protesters, compared to 87 rounds in the entirety of the 2014 pro-democracy movement, the outlet Quartz noted. Police reportedly fired another 800 rounds on August 5 alone.

The Committee to Protect Journalists (CPJ) condemned reports on Monday that police specifically targeted journalists with tear gas, citing the example of video journalist Lai Ka Wai, who lost consciousness after falling and hitting his head in a barrage of tear gas and rubber bullets.

“Hong Kong police must take measures to ensure that journalists like Lai Ka Wai can do their work safely,” CPJ Asia Program Coordinator Steven Butler said in a statement. “To be clear: police need to take care not to hit journalists with rubber bullets or tear gas canisters, or use unnecessary force while taking crowd-control measures.”

Other journalists on the scene have accused authorities of referring to them as “actors” attempting to smear the reputation of the police.

I was there. I was sitting next to him. He called us journos actors too https://t.co/cK0ZBQsXuG

Hong Kong authorities have offered no indication they will cease their brutal repression of the protests.

“The most pressing and overriding task at present is to stop violence, end the chaos and restore order, so as to safeguard our homeland and prevent Hong Kong from sinking into an abyss,” Zhang Xiaoming, the head of the Hong Kong and Macao Affairs Office of China, said during an extraordinary “symposium” organized by the Communist Party to address the Hong Kong protests on Wednesday. The symposium attracted 550 communist regime officials and supporters, many of whom spoke in favor of a People’s Liberation Army (PLA) invasion of Hong Kong.

“If the violence and chaos are allowed to continue, not only the safety of Hong Kong citizens’ lives and property will be endangered, the governance authority of the SAR government, the cornerstone of the rule of law in Hong Kong, the prosperity and stability of Hong Kong, and the ‘one country, two systems’ will also be destroyed,” Xinhua, the Chinese state news agency, paraphrased Zhang as saying.

Beijing has so far rejected the idea of sending the military in to attack protesters, but has staged several threatening displays on the Hong Kong border. Most recently, this week, police in Shenzhen – the province bordering Hong Kong – staged a 12,000-officer anti-riot drill, facing off against police actors disguised to look like Hong Kong protesters.

Hong Kong residents are demanding direct election of their lawmakers, a full withdrawal of a bill that would make Chinese law viable on Hong Kong soil, freedom for imprisoned protesters, an independent inquiry on police brutality, and an apology from the government for calling the peaceful June 12 protest a “riot.”