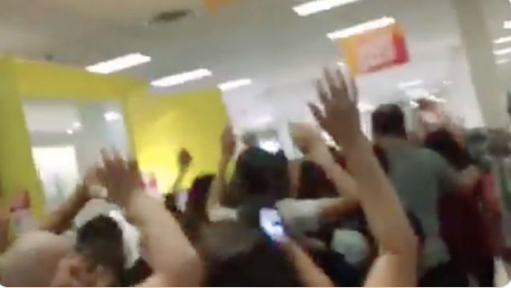 Update (2:57 EST) – The El Paso Mayor Dee Margo has confirmed to local media that there are multiple fatalities as well as 3 suspects believed to be involved int the mass shooting that are in custody.

Update (2:25 EST) – Local NBC affiliate KTSM is confirming that 18 people have been shot at a Walmart in El Paso, Texas.

The extent of their injuries as well as the number of fatalities is unknown at this time.

Multiple law enforcement agencies, including El Paso Police are responding to the scene, which is still being described as an active shooter situation.

The Walmart is located next to the Cielo Vista Mall, which has also been evacuated.

The El Paso Police Department has just stated there are possibly multiple shooters.

Scene is still Active. We have multi reports of multiple shooters. Please avoid area police conducting search of a very large area. Media staging will be given when area is secure.

El Paso sits on the Southern border with Mexico, not far from Ciudad Juarez.

This is a breaking story. We will update it as more information becomes available.