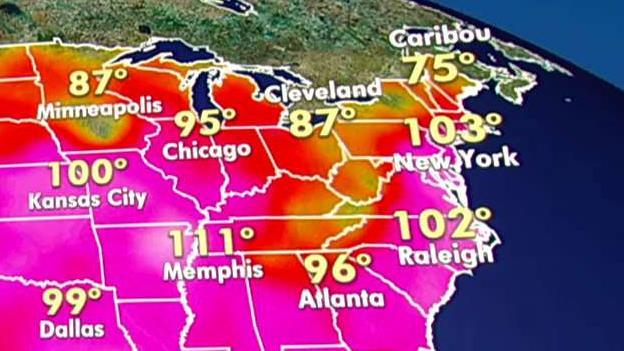 An already “dangerous” heatwave could have a feels-like temperature in the triple digits on Saturday as excessive heat warnings and advisories target more than 200 million Americans across the country.

The National Weather Service (NWS) warned that daytime temperatures are expected to climb to the mid to upper 90s on Saturday “combined with high humidity will result in heat indices as high as 115 for some.”

Much of the nation is under excessive heat warnings and heat advisories, from the Texas Panhandle to Middle Mississippi and Ohio Valleys, per the NWS. Parts of the Great Lakes, as well as parts of the Northeast southward to the Southern Mid-Atlantic, among other areas, are under similar warnings and advisories.

An excessive heat warning was issued for parts of Ohio early Friday morning and is expected to continue until at least 8 p.m. Saturday. Cities like Toledo, Cleveland, and Fremont will see an index, which is what the temperature will feel like, as high as 110 degrees Fahrenheit with the highest index occurring in the late afternoon and early evening.

Omaha, Nebraska residents can expect to see a temperature index as high as 117 degrees Fahrenheit with a similar excessive heat warning in effect until Saturday night.

On the East Coast, the Washington, D.C., and Baltimore areas also are under excessive heat warnings and heat advisories.

“This is going to be one of the most severe heat events that we’ve had in the last several years,” Dr. Christopher Rodriguez, the district’s director of Homeland Security and Emergency Management Agency, said, per CBS News.

Officials with the New York City Triathlon announced Thursday that Saturday’s race had been canceled due to the extreme heat.

Temperatures at night won’t offer much relief, either. Low temperatures are expected to stay in the upper 70s or low 80s, the weather agency said.

Those suffering from a heat-related illness may experience nausea and vomiting, dizziness, a rapid heartbeat, and trouble breathing, among other symptoms. The NWS offers tips on how to beat the heat and stay cool, as well as how to respond to a heatwave. For more information, click here.

Kansas man who murdered woman on cruise ship gets more than...