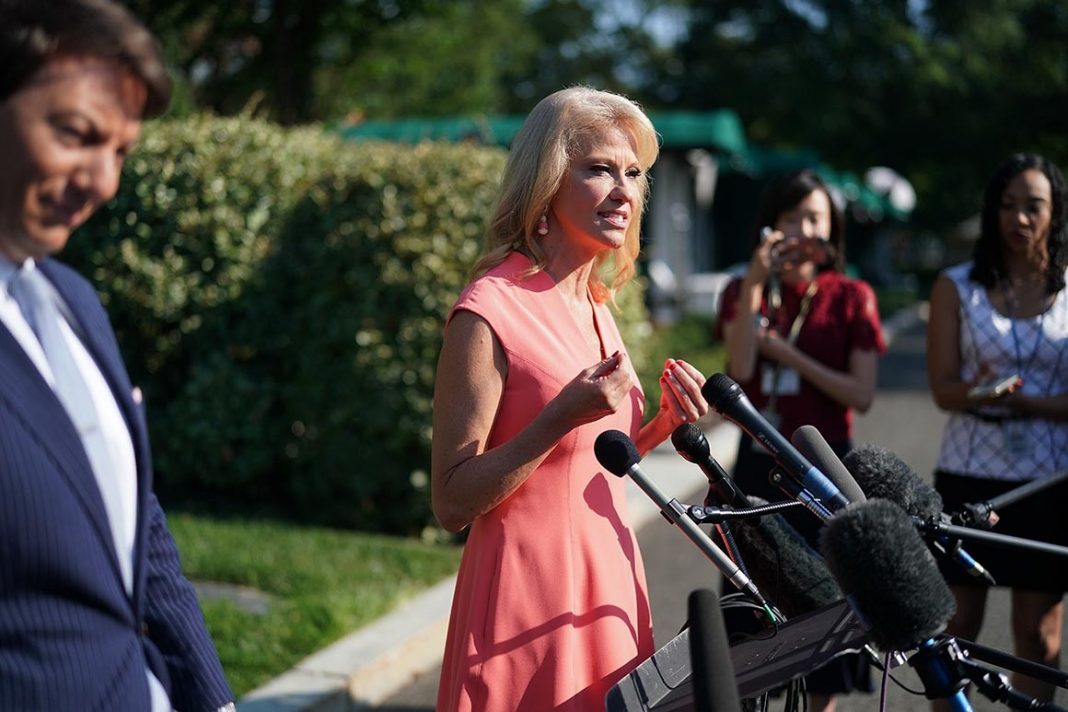 
White House Counselor Kellyanne Conway on Monday defied a congressional subpoena, refusing to show up for testimony to the House Oversight and Reform Committee about her violations of the Hatch Act and prompting House Democrats to threaten to hold her in contempt of Congress.

In a letter to Rep. Elijah Cummings (D-Md.), the chairman of the panel, White House Counsel Pat Cipollone asserted the Trump administration’s long-standing view that current and former presidential advisers are “absolutely immune” from congressional testimony, writing: “Ms. Conway cannot be compelled to testify before Congress with respect to matters related to her service as a senior adviser to the president.”

“Because of this constitutional immunity, and in order to protect the prerogatives of the Office of the President, the president has directed Ms. Conway not to appear at the committee’s scheduled hearing,” Cipollone continued.

Cummings threatened to hold Conway in contempt of Congress if she does not honor the subpoena before July 25.

“This is a clear cut case. We are not requiring her to testify about advice she gave the president or about the White House’s policy decisions,” Cummings said before adjourning Monday’s hearing.

“We are requiring her to testify before Congress about her multiple violations of federal law, her waste of taxpayer funds, and her actions that compromise public confidence in the integrity of the federal government,” he added.

“Today, Chairman Cummings and Democrats on the House Oversight Committee continued their purely political campaign to harass the president and his close advisors,” Grisham said. “Democrats continue to overreach and politicize the Office of Special Counsel — this time, by trying to silence Kellyanne Conway with ill-founded, phony allegations about the Hatch Act.”

Cummings issued the subpoena after the White House previously blocked Conway from appearing before the committee voluntarily.

The U.S. Office of Special Counsel, the federal agency that oversees Hatch Act compliance, cited Conway last month for multiple violations of the 1939 law, which prohibits government employees from participating in political speech while performing their official duties. The Democrat-led Oversight Committee has been looking into the issue.

“This illegal activity — and the ongoing effort to cover it up — must not be allowed to stand,” Cummings said.

While Conway has publicly pushed back against the OSC’s claims that she violated the Hatch Act multiple times, she has not taken up the Oversight Committee’s invitations for her to give her side. Her failure to show up for a hearing last month led the committee to authorize Cummings to issue a subpoena to compel her testimony.

OSC chief Henry J. Kerner, a Trump appointee who previously served as a GOP staffer on the Oversight panel, testified before the committee last month, calling Conway a repeat offender of the Hatch Act. His formal report on Conway’s violations recommended that President Donald Trump fire her; Trump has instead defended Conway.

“This hearing is solely for the purpose of creating political theater,” said Ohio Rep. Jim Jordan, the top Republican on the Oversight Committee.

In his report, Kerner said Conway violated the Hatch Act when she spoke multiple times about the 2020 presidential race, in addition to the Alabama Senate election in 2017.

“Ms. Conway’s advocacy against the Democratic candidates and open endorsement of the president’s re-election effort during both official media appearances and on her Twitter account constitute prohibited personnel activity under the Hatch Act,” Kerner wrote.