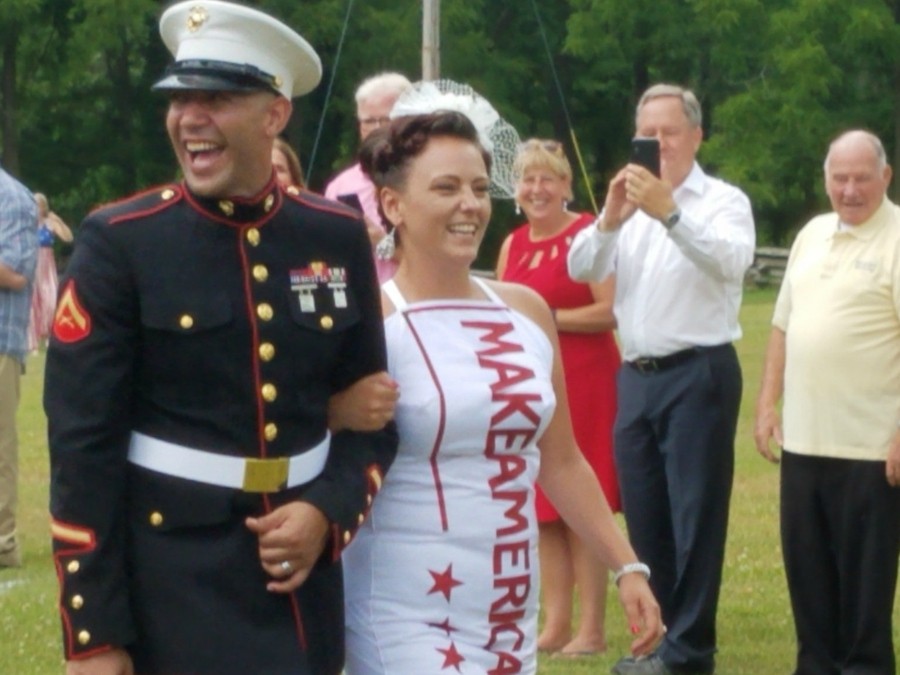 A couple in Kent County, Michigan let their patriotism and admiration for President Trump shine at their wedding last week.

Audra and Jeff Johnson’s MAGA-themed wedding on July 4th incorporated red, white, and blue as a way to celebrate their country and beloved president.

“It looked like America threw up all over my wedding and I’m not sorry,” the bride said of the event.

To top it all off, Johnson’s red and white Make America Great Again wedding gown was created by fashion designer and Trump supporter Andre Soriano and is similar to the dress singer Joy Villa wore to the Grammy Awards in 2017.

“The people who poured their heart and soul and actually came up to me and took photos with me and said I just wanted to tell you I love you. I love your dress. I love what you’re doing. Those were the overwhelming majority that day. Even at the Grammys,” Villa said during an interview with Breitbart News.

Villa again made a statement at the Grammy Awards in 2018 when she wore a white pro-life themed gown that had an image of a baby surrounded by a rainbow colored womb painted on the fabric.

Johnson said her maid of honor, who is a Democrat, was uncomfortable about being asked to wear the MAGA hat, but that didn’t stop her from joining in the celebration.

“I said, ‘It’s OK. It’s OK. Just wear a red hat. We still love you. We can have completely different opinions about everything and still love each other.’” Johnson commented.

However, the bride said her father-in-law was unwilling to attend the celebration due to the patriotic theme of their wedding.

“He sent us a text message. It said, ‘As long as you support that racist in the White House, I won’t be attending your wedding.’ Which is sad but we did have a lot of people that loved us and showed up,” Johnson told reporters.

Johnson said because she is Filipino and her husband is African-American, she felt it was important to let people know that Trump supporters are not racist.

“We both thought it was really important to show that that’s wrong,” she concluded.