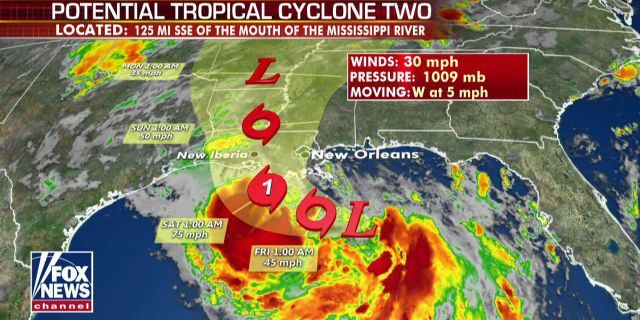 A brewing tropical weather system in the Gulf of Mexico forced mandatory evacuations in parts of Louisiana on Thursday, as a potential hurricane is expected to spark flash flooding in places like New Orleans still drying out from torrential rain.

The National Hurricane Center said a disturbance located about 115 miles south-southeast of the mouth of the Mississippi River is expected to strengthen into a tropical depression or tropical storm by Thursday night, and then a hurricane by late Friday. It if becomes a tropical storm, it would have the name “Barry” and be the second named storm of the Atlantic hurricane season.

“This is crawling across the Gulf of Mexico, which means there is still a little bit of time for this to change and it also means the longer it moves, the slower it moves, the longer the rain can pile up,” Fox News Meteorologist Adam Klotz said Thursday on “FOX & friends.”

The potential forecast track of Barry, which is forecast to be a tropical storm by Thursday night and hurricane by Friday.
(Fox News)

“The system is expected to produce total additional rain accumulations of 10 to 15 inches near and inland of the central Gulf Coast through early next week, with isolated maximum rainfall amounts of 20 inches,” the NHC said. “Rainfall amounts exceeding 6 to 9 inches have already occurred across portions of the New Orleans metropolitan area, which has resulted in flooding.”

Klotz said Thursday that just the initial rain bands from the system created major flooding across the New Orleans area.

“There’s going to be a lot more rain before all is said and done,” he added.

Louisiana Gov. John Bel Edwards declared a state of emergency Wednesday and said National Guard troops and high-water vehicles will be positioned all over the state.

“The entire coast of Louisiana is at play in this storm,” he warned.

On Wednesday, New Orleans got an early taste of what may be in store in the days ahead, as torrential rains paralyzed rush-hour traffic and stalled cars around the city. Mandatory evacuation orders were issued for parts of Plaquemines Parish starting at 6 a.m. Thursday, FOX8 reported.

Frank Conforto Jr. walks in the parking lot of the University Medical Center (UMC) with the Mercedes-Benz Superdome in the background on Glavez Street in New Orleans after flooding from a storm Wednesday, July 10, 2019.
(AP Photo/Matthew Hinton)

Plaquemines Parish President Kirk Lepine said the order was issued as a cautionary measure in response to the historically high water levels being recorded in the Mississippi River. Similar evacuations were ordered in Jefferson Parish.

“We’ve never experienced a high river like this before in such an early period of the hurricane season. The unknown is what’s got us to a little concerned,” Lepine told FOX8. “We want the public to heed to our warnings. If we asked you to evacuate, if we ask you to move, please find a way.”

Up to 10,000 people are affected by the evacuation orders in Plaquemines Parish, according to Nola.com.

A spokesman for the Army Corps of Engineers in New Orleans said the agency was not expecting widespread overtopping of the levees, but there are concerns for areas south of the city. The weather service expects the river to rise to 20 feet by Saturday morning at a key gauge in the New Orleans area, which is protected by levees 20 to 25 feet high.

The Corps was working with local officials down river to identify any low-lying areas and reinforce them, spokesman Ricky Boyett told the Associated Press. He cautioned that the situation may change as more information arrives.

“We’re confident the levees themselves are in good shape. The big focus is height,” Boyett said.

New Orleans officials have asked residents to keep at least three days of supplies on hand and to keep their neighborhood storm drains clear so water can move quickly.

As the water from Wednesday morning’s storms receded, people worried about what might come next.

“This is going to be a slow storm…That’s what I’m concerned about,” Tanya Gulliver-Garcia told the AP.