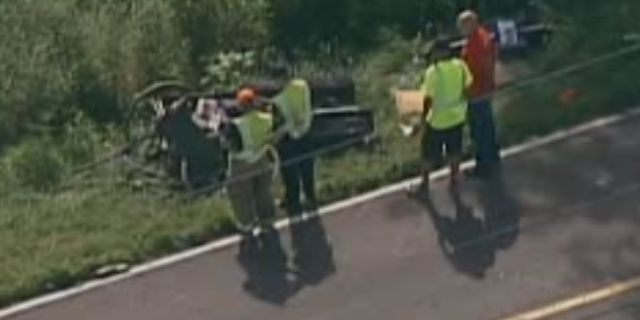 A 7-year-old boy has died and several people were injured, police said, after a pickup truck and a horse-drawn carriage collided in Missouri on Thursday.

Missouri State Highway Patrol Cpl. Juston Wheetley, who responded to the crash, told Fox News that the carriage, carrying six people, was headed to a blueberry patch and had almost arrived when the truck struck it from behind.

Wheetley said the crash happened around 6:45 a.m. on Highway OO in St. Francois County, an hour and a half south of St. Louis.

A horse-drawn carriage, carrying six people, was headed to a blueberry patch in Missouri and had almost arrived when the truck struck the carriage from behind, killing a 7-year-old boy, police said.
(KTVI)

He said the 7-year-old boy was pronounced dead at the scene. Wheetley said the driver of the buggy, a 19-year-old man, was not injured in the crash. A 12-year-old boy,  a 10-year-old girl, a 50-year-old woman and a 28-year-old man were airlifted to area hospitals with serious injuries, he added.

Updates about the conditions of the injured parties was not available at the time of publication.

“You could definitely tell there was a lot of emotions at the scene,” Wheetley told Fox News.

The dead boy was identified as Mervin Shirk of Farmington, according to the crash report.

In the report, police said the 16-year-old driver of the pickup truck, who is from Fredericktown, was “inattentive to the roadway ahead and failed to see” the horse-drawn carriage. The report said the crash ejected those in the buggy.

A horse-drawn carriage, carrying six people, was headed to a blueberry patch in Missouri.
(KTVI)

The relationship between all of the victims was not immediately known; police said they are all from a Mennonite community in Farmington.

Wheetley said the two teens in the truck were not injured; the horse pulling the carriage was taken to a local veterinarian to be checked out.

“My first impression was that it was devastating,” Wheetley told Fox News. “I’ve worked this area for about 15 years and I don’t remember anything this tragic happening with the Mennonite community.”

He reminded people that “driving is a responsibility and a privilege and we should take that responsibility seriously and pay attention when operating a vehicle.”

So far no charges have been filed.