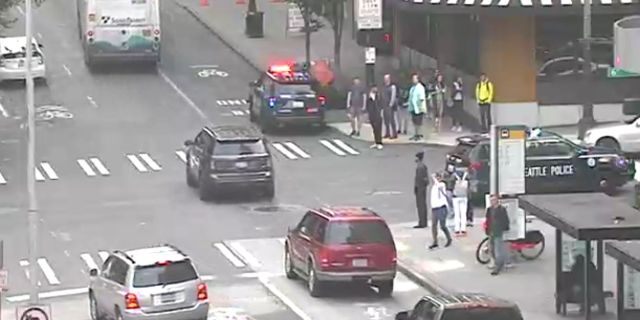 At least three people were injured after reports of a stabbing in downtown Seattle on Tuesday by an apparent naked assailant.

The Seattle Police Department said the incident was first reported around 10 a.m. on 6th Avenue and Olive Way, located near the headquarters of Nordstrom.

Police Tweeted two people were transported to Harborview Medical Center. One of the victims was a 75-year-old man who was listed in stable condition.

Several people were injured in a reported stabbing in downtown Seattle on Tuesday.
(SDOT Traffic)

Further details about the second victim were not immediately available. A third person was treated at the scene and declined transport, police said.

The incident drew a large emergency response in the downtown area, according to video from a KOMO News reporter.

The suspect was taken into custody according to Seattle Police, who added the man’s clothing and knife were recovered in the area.

US savings rate hits record 33% as coronavirus causes Americans to...