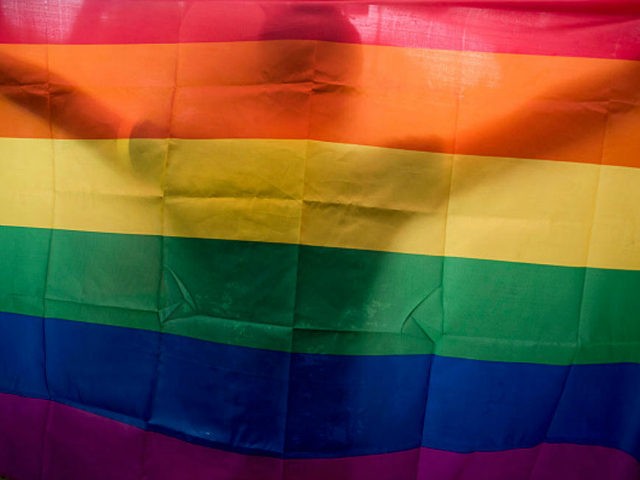 Our Lady of Grace Catholic Church in Hoboken celebrated a special “Pride Mass” on Sunday, highlighting a growing rift among the Catholic community over homosexuality.

Despite the Catholic Church’s condemnation of homosexual activity, local media reported, the Pride Mass “signifies an acknowledgement of dramatically shifting views, not only within the Catholic community but Hoboken itself.”

“Once a hardscrabble blue-collar town, decades of socioeconomic transformation have created a relatively cosmopolitan environment when compared to Hoboken’s more parochial past,” the report stated.

The pastor of Our Lady of Grace, Father Alexander Santora, said that the second annual Pride Mass was being celebrated “in support of our LGBTQ Brothers and Sisters.”

“Mass starts at 9 a.m. Afterward attendees are encouraged to march in the World Pride March in New York City with the LGBT Catholic and Friends group,” an ad for the Mass announced.

Catholics seem confused over whether to applaud or denounce the concept of “Gay Pride,” which celebrates homosexuality.

Jesuit Father James Martin, a well-known LGBT promoter, wished his “many” LGBTQ friends a happy pride month in a tweet to his followers on June 1.

Father Martin urged his gay friends to be proud of “your place in the world, and of your many contributions to the church,” declaring they are “wonderfully made” by God.

Bishop John Stowe of Lexington, Kentucky, also tweeted out his support for gay pride, saying on June 28 he is grateful for “the presence of people of faith reaching out to those who have been turned away or felt rejected by the Church.”

Bishop Thomas Tobin of Providence, on the contrary, underscored the immorality of homosexual activity and therefore the underlying problem with celebrating it.

“A reminder that Catholics should not support or attend LGBTQ ‘Pride Month’ events held in June,” the bishop tweeted. “They promote a culture and encourage activities that are contrary to Catholic faith and morals. They are especially harmful for children.”

Other Catholics recalled how Saint John Paul II reacted to the first gay pride parade organized in Rome in the year 2000.

“In the name of the Church of Rome, I cannot refrain from expressing bitterness for the affront to the Grand Jubilee of the year 2000 and for the offense to the Christian values of a city that is so dear to the hearts of Catholics across the world,” the pope told the faithful gathered in Saint Peter’s Square.

“Homosexual acts go against natural law. The Church cannot silence the truth because it would not live up to its faith in God the creator and would not help discern what is good from what is evil,” the pope said.

At the same time, the Church urges its pastors to treat persons with homosexual tendencies “with respect, compassion, and sensitivity,” while helping them to live chaste lives.

The Church has never suggested, however, that people should take “pride” in their sins or disordered tendencies or to flaunt them in public as a badge of honor.

Saint Paul, who wrote of those whose “glory is in their shame,” denounced the way people the people of his day abandoned themselves to their “shameful lusts” in reference to homosexuality.

“Even their women exchanged natural sexual relations for unnatural ones,” he said, while “the men also abandoned natural relations with women and were inflamed with lust for one another.”

“Men committed shameful acts with other men and received in themselves the due penalty for their error,” he wrote.

In early June, the former Vatican ambassador to the United States told the Washington Post that a gay mafia among Church leadership is blocking attempts to address clerical sexual abuse.

In an extensive interview, Archbishop Carlo Maria Viganò said that the sexual abuse crisis would be “far less severe” if the “problem of homosexuality in the priesthood were honestly acknowledged and properly addressed.”

“Given the overwhelming evidence, it is mind-boggling that the word ‘homosexuality’ has not appeared once, in any of the recent official documents of the Holy See” dealing with clerical sexual abuse, Viganò told the Post.

Instead, a “gay mafia” among the bishops, seeking to protect themselves, was “sabotaging all efforts at reform,” he said.

The Hottest Player in College Basketball Is Named Sabrina

The Hottest Player in College Basketball Is Named Sabrina