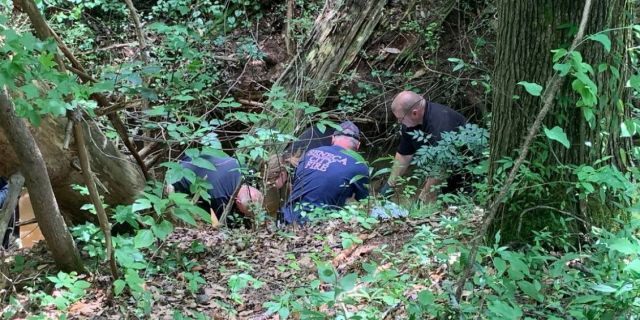 South Carolina authorities on Monday found the remains of a missing woman, one week after a dog dug up human bones in a homeowner’s yard, police said.

A search team found a head and upper torso “in a state of advanced decomposition,” Oconee County Coroner Karl Addis said in a news release.

A woman’s head and torso were found in a creek in northwestern South Carolina right before the search was called off, police said.
(Seneca Police Department)

Monday’s findings are “presumed to be associated with” with a right pelvic bone and femur that a dog dug up in Seneca, S.C. last week, Addis said. The bones were studied by forensics experts who determined that they belonged to a woman, aged 25 to 45, who had died within the last few months, The State reported.

The findings prompted a “large-scale search of the area,” using cadaver dogs. Police said Monday’s remains were found in a nearby creek just as a team of 35 searchers was being recalled.