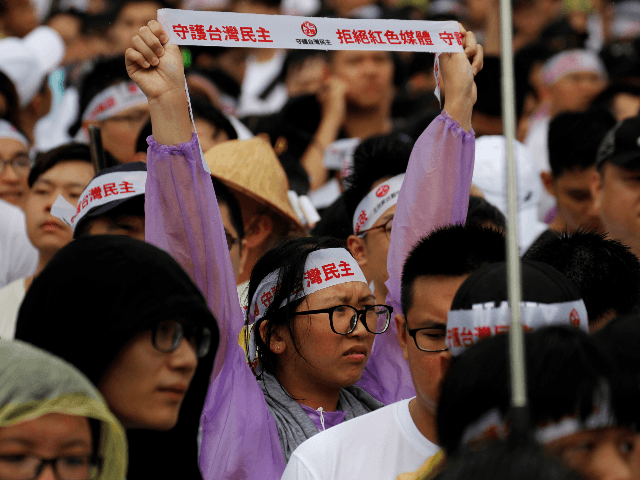 An enormous demonstration was held in Taipei, Taiwan, on Sunday to oppose Chinese authoritarianism and spotlight Taiwanese media outlets that spread Beijing’s ideology and propaganda. The demonstrators collectively referred to such organizations as “red media.”

The Taipei Times quoted protest organizer and YouTube celebrity Holger Chen denouncing Chinese infiltration of Taiwanese media and castigating media organizations that refused to report on the 30th anniversary of the Tiananmen Square massacre or the immense protests in Hong Kong.

Chen was especially critical of CtiTV News, which he accused of meddling in Taiwanese politics and “brainwashing” its citizens.

“We want such media outlets to go away,” he said.

“We are here to tell the CCP that you may be able to buy certain things with money, but not everyone is willing to sell their dignity,” said Chen.

Chen proudly pointed to the size of the Sunday rally, despite poor weather conditions, as evidence that it would be “impossible” for Communist China to invade Taiwan, “regardless of its methods.”

“Unlike KMT rallies, we did not provide meals or buses or even chairs, but everyone stood and stayed until the end despite the winds and pouring rain,” he said, taunting the more pro-China of Taiwan’s major parties, the Kuomintang.

The fitness video streamer, who also posts under the name Guan Chang, said he has lost a great deal of advertising and endorsement money from companies that do business with mainland China. He accused the Chinese of using economic leverage to intimidate Taiwanese businessmen out of supporting people who oppose Beijing’s agenda.

“It is important that we build a defense mechanism based on the idea of ‘defensive democracy’ to protect Taiwan’s democracy and the rule of law, which are under attack,” said legislator Huang Kuo-chang, whose New Power Party (NPP) helped to organize the demonstration.

Huang said red media companies are foolish to “accept subsidies from the CCP [Chinese Communist Party] with one hand and use the other produce fake news to damage Taiwan’s democracy.”

“They are our shared enemies and require our collective resistance,” he declared.

Participants in the rally called for Taiwan’s government to implement stronger transparency laws that would require companies to disclose their relationships with foreign entities. They also demanded more rigorous enforcement of existing laws against subversive media conduct and politically biased coverage, including excessive attention devoted by red media outlets to Taiwanese political candidates favored by Beijing. Some of the demonstrators specifically wanted CtiTV to be socked with heavier fines or banned from Taiwan altogether.

The anti-red media demonstrators made a point of cleaning up after their rally with remarkable speed to contrast themselves favorably with a notoriously messy rally held the previous day for populist pro-Beijing presidential candidate Han Kuo-yu. Photographs of completely clean streets were posted within an hour of the rally’s conclusion and contrasted with piles of garbage left behind by the “Han fans.”