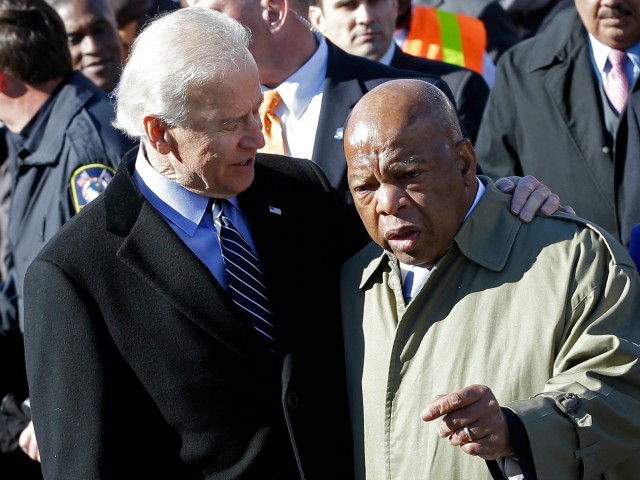 A majority of black Democrats are not holding former Vice President Joe Biden’s comments praising the civility of segregationist Democrats against him, with 30 percent actually saying they are more likely to vote for Biden, according to a national poll released on Tuesday.

A Politico/Morning Consult poll released on Tuesday found that “after hearing about Biden’s comments on working with multiple segregationists,” 57 percent of black Democrats said they would be “more likely to vote for Biden” (30 percent) or believed the comments “made no difference” (27 percent). Just 20 percent of black Democrats reportedly said they would be “less likely” to vote for Biden.

“I was in a caucus with James O. Eastland,” Biden reportedly said. “He never called me boy, he always called me son.”

Biden remained at the top of the national poll, which also found that 41 percent of likely primary voters said Biden’s remarks “would make no difference to them and 29 percent said they would be more likely to vote for him.” Just 18 percent of likely primary voters “said they would be less likely to vote for him” because of his remarks about Messrs. Eastland and Talmadge.

Though Sen. Cory Booker (D-NJ) said Biden should apologize because his comments showed a “terrible lack of understanding” and were “hurtful” to African Americans, prominent black establishment Democrats like Rep. John Lewis (D-GA) and House Majority Whip Jim Clyburn (D-SC), who has been accused of tacitly endorsing Biden, came to Biden’s defense.

Biden defiantly refused to apologize and rubbed many black Democrats the wrong way when he demanded that Booker apologize because he did not have a “racist bone” in his body even though Booker never accused Biden of being racist.

Speaking to Al Sharpton over the weekend, Biden changed his story and falsely accused the media of not reporting the full context of remarks, claiming that Eastland called the late Sen. Ted Kennedy (D-MA) “boy.” Biden claimed he was saying that being called “son” by Eastland was even worse than being referred to as a “boy.”

“I do understand the consequence of the word ‘boy’ but it wasn’t said in any of that context at all,” Biden told Sharpton. “They called Teddy Kennedy ‘boy,’ that was the distinction … the reason he called me ‘son’ because he said I’m not even qualified to be in the Senate.”

Biden is leading the primary field in part because he is the overwhelming favorite of the party’s critical black voters, who have told pollsters that they favor Biden because he was former President Barack Obama’s loyal vice president and is the best candidate to defeat President Donald Trump.

Officer hospitalized after being filmed by crowd during 10-minute fight with...