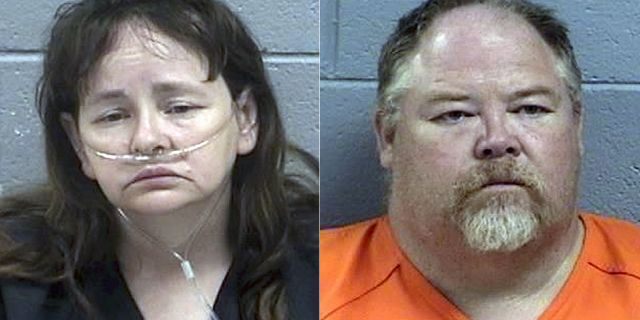 A New Mexico woman is accused of beating and torturing some of her children — and forcing them to watch her kill their pets as punishment, authorities said Tuesday.

Martha Crouch and her husband, Timothy were arrested on Monday following a child abuse probe by The New Mexico Children, Youth and Families Department (CYFD) sparked by a report that the couple’s children were not receiving an adequate education, according to KOB-TV.

MCDONALD’S EMPLOYEES CATCH WOMAN DROPPING CHILD OFF SO SHE COULD GO GAMBLING WITHOUT HIM: ‘ HE DRIVES ME CRAZY’

A CYFD investigator, Deanna Taylor, told the Associated Press she had received reports indicating the couple faced prior complaints in Missouri, Alaska, Kansas and Montana. Investigators told KOB that they believe the Crouches moved their family from state to state after investigations began. It is not clear what types of allegations were made in those states.

The couple were arrested after San Juan County Sheriff’s deputies arrested their oldest child, 31-year-old, Timothy Crouch, on a charge of assault with a deadly weapon May 30. The younger Tim Crouch was accused of pointing a gun at three of his brothers saying he would shoot them following an argument over food. One of the three brothers said the fight started because he was allergic to beef and could not eat hot dogs, an affidavit for an arrest warrant said.

Detectives say they uncovered false allegations that two sons beat another brother to death and kidnapped a sister, but heard other claims of abuse, torture and extreme animal cruelty.

According to official documents, a young girl told authorities that after one of the family dogs had puppies, Martha Crouch “took the puppies and put them into a giant pot and boiled them, making all the kids watch.” The same girl told investigators her mother also fed a kitten poison and authorities reported finding the body of a dog buried in the backyard that had been shot as a punishment to the children.

“My family are wonderful people. My mom and dad are some of the best people you’ll meet”, Timothy told KOB.

The station reported that the children were only allowed to eat one meal a day, while one of Timothy’s sisters, whom Martha believed was overweight, was placed on a “fat chain” for three years to suppress her appetite while the family lived in Alaska.

A young boy told authorities that he was “ beaten, shot, stabbed and run over by his parents”. The boy further claimed to have BBs still inside his arm “from when the mother shot him with a shotgun.”

Martha Crouch has been charged with child abuse and extreme cruelty to animals. Timothy Crouch is facing an obstruction charge. They are due to appear in court on Wednesday.

Court records show Timothy Crouch pleaded no contest to a theft charge in 1999 in Alaska. A forgery charge in Alaska also was dismissed that year.

Court records show the family had at least one other recent encounter with authorities. San Juan County officials cited Timothy Crouch in May with illegally burning trash.

Fox News’ Kira Grant and The Associated Press contributed to this report.

Fox News’ Kira Grant and the Associated Press contributed to this report.