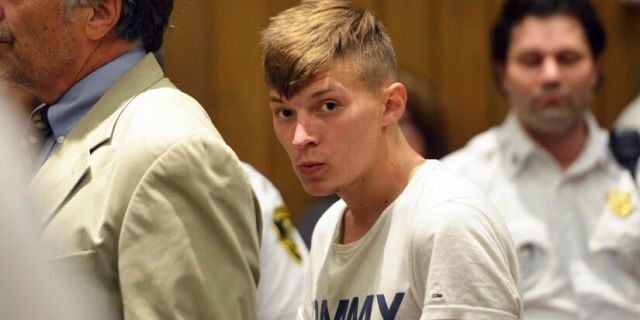 U.S. Immigration and Customs Enforcement (ICE) has filed a detainer request against a 23-year-old Massachusetts man with a history of traffic arrests who is accused of killing seven motorcyclists in a fiery collision in New Hampshire last week.

The request means Volodymyr Zhukovskyy could face deportation back to his native Ukraine whenever he is released from custody. Zhukovskyy’s attorney entered a not guilty plea on his behalf to seven counts of negligent homicide Tuesday in Coos County Court in Lancaster, N.H.

A judge also ordered Zhukovskyy remanded in custody, saying his driving record poses a danger to the public and himself.

The crash occurred around 6:30 p.m. Friday on U.S. 2, a two-lane highway that passes through the small town of Randolph just north of Mount Washington.

Zhukovskyy was driving a Dodge pickup truck that was towing a flatbed trailer. Investigators said he was driving erratically when he crossed into the center lane and collided with several bikers.

The victims were members or supporters of the New England motorcycle club, Marine JarHeads, which is comprised of Marine veterans and their spouses. Club president Manny Ribeiro said he remembers an “explosion” and seeing most of the bikers behind him being wiped out from the trailer of the truck.

Zhukovskyy was driving for Springfield, Mass.-based Westfield Transport at the time of the crash. Witnesses described a “devastating” scene as bystanders tried to help the injured amid shattered motorcycles.

Authorities questioned Zhukovskyy at the scene and let him go. He was taken into custody Monday at his West Springfield, Mass., home on a fugitive from justice charge related to Friday’s collision. He was handed over to New Hampshire authorities after a court appearance that day.

Zukovsky’s father, who goes by the same name, told the Boston Herald on Monday that his son had just been granted a green card.

Volodymyr Zhukovskyy, after he was arrested and charged with driving under the influence of drugs or alcohol in East Windsor, Conn. this past May. (East Windsor Police Department via AP)

“I’m sorry for the families,” he told the paper.

Zhukovskyy has a series of traffic-related infractions. Last month, he was arrested in a Walmart in East Windsor, Conn., after failing a sobriety test.

He was also arrested in 2013 on a drunken driving charge in Massachusetts. He was placed on probation for one year and had his license suspended for 210 days

Fox News’ Bradford Betz and The Associated Press contributed to this report.