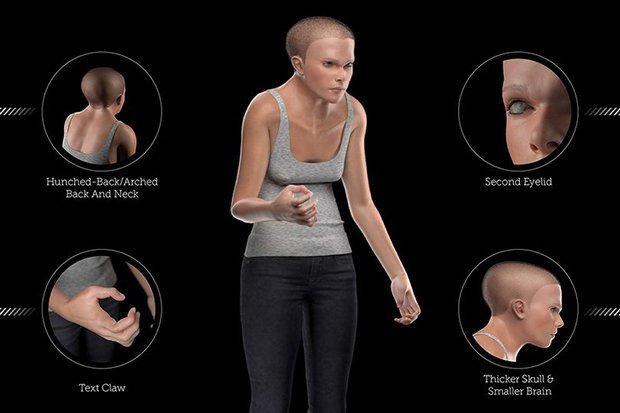 Experts have examined the way technology will affect the human form, suggesting the body may change dramatically.

Creating a 3D model of a future human called “Mindy”, scientists said people living in 2100 may have hunched backs from hours of sitting over computers and looking at smartphones.

Mindy also has bigger neck muscles to compensate for her poor posture, a thicker skill to protect from radiation and a smaller brain that has shrunk from leading a largely sedentary lifestyle.

Humans in fewer than 100 years may also have claw-like hands from gripping their phones.

HUNCHBACKS: This model is a suggestion of how humans might look in 2100 (Pic: Maple Holistics)

CLAW HANDS: The use of technology will apparently have a huge effect on the body (Pic: Maple Holistics)

PHONES: People may have a curve in their spines from leaning over their phones (Pic: Maple Holistics )

Caleb Backe, a health and wellness expert at Maple Holistics, said: “Spending hours looking down at your phone strains your neck and throws your spine off balance.

“Consequently, the muscles in your neck have to expend extra effort to support your head.

“Sitting in front of the computer at the office for hours on end also means that your torso is pulled out in front of your hips rather than being stacked straight and aligned.”

Kasun Ratnayake, of the University of Toledo, also said the human body could change to limit the amount of damaging light eyes are expose to – possibly resulting in a second eyelid.

“Humans may develop a larger inner eyelid to prevent exposure to excessive light, or the lens of the eye may be evolutionary developed such that it blocks incoming blue light but not other high wavelength lights like green, yellow or red,” he said.

Dr Nikola Djordjevic, from Med Alert Help, said: “The way we hold our phones can cause strain in certain points of contact – causing ‘text claw’ and ’90-degree elbow’ also known as the cubital tunnel syndrome.

“This syndrome is caused by pressure or the stretching of the ulnar nerve which runs in a groove on the inner side of the elbow.

“This causes numbness or a tingling sensation in the ring and little fingers, forearm pain, and weakness in the hands – keeping the elbow bent for a long time.”

Jason O’Brien, head of TollFreeForwarding.com, which produced the model, said: “Technology gives us convenience, connectivity, entertainment, and so much more – but there is a trade-off.

“Overexposure to technology can sometimes come to the detriment of our health.”

users decline in U.S. and Canada

Whistleblower to Meet with FBI Again over Biden Corruption Scandal