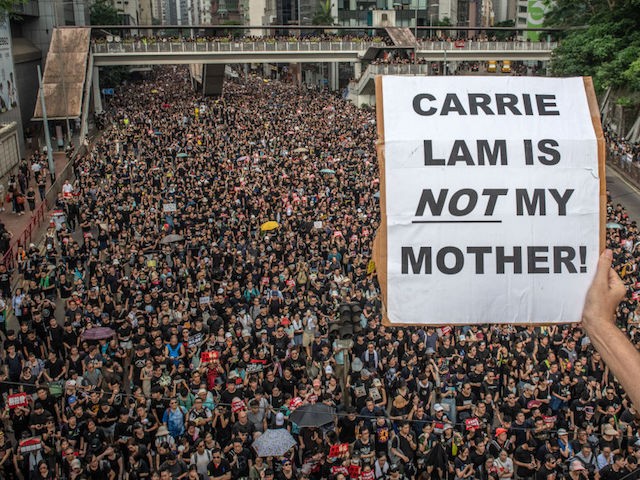 Hong Kong activists are determined to get their message out during the G20 summit, where mainland China has decreed no discussion of Hong Kong will be permitted.

Protesters scheduled new demonstration against the Beijing-friendly extradition bill for Wednesday and organized a crowdfunding campaign to finance front-page newspaper ads urging G20 nations to get involved despite China’s tirades against foreign interference.

Protest organizers used the encrypted messaging platform Telegram to organize a silent march to the Hong Kong consulates of G20 nations on Wednesday. They plan to submit a petition to each consulate asking its government to confront Chinese President Xi Jinping at the summit this weekend.

The Hong Kong Free Press on Tuesday quoted from the press release sent out by organizers of the march:

According to a press advisory sent out by the protesters, they plan to visit the US consulate, EU office, and the UK consulate. They will then split into two groups, with one group going to consulates in Central including Japan, Germany and Canada; and a second group moving to Wan Chai to visit the consulates of Italy, Australia and Indonesia.

The protesters said they will be dressed in black and will walk silently, and participants may choose whether to wear a mask or not. They said the petition letter mainly talks about the development of the anti-extradition bill protests, and the “erosion of democracy and freedom” in Hong Kong by China.

“We will urge the countries to pressure China at the G20 to raise concerns over Hong Kong, to defend Hong Kong’s high degree of autonomy and free trade environment, and to protect the rights of their citizens to do business and to live in Hong Kong,” they said.

The march is scheduled to conclude with a rally whose theme will be “Free Hong Kong, Democracy Now.” Organizer Jimmy Sham said the goal is to ask the G20 nations whether “Hong Kong people deserve democracy.”

Sham further stated the movement has not relented in any of its demands and still wants Hong Kong chief executive Carrie Lam to resign, in addition to permanent withdrawal of the controversial extradition bill, freedom for jailed demonstrators, and a full investigation of excessive police violence.

There has been speculation some participants in the enormous, highly decentralized protest movement might be willing to relax other demands if the extradition bill is formally and irrevocably scuttled and the government takes a softer touch with the demonstrators arrested. A convincing show of strength and resolve, before and during the G20 summit, will be important to counter Beijing’s preferred narrative about a movement that is rapidly deflating now that the extradition bill is effectively off the table.

Protest organizers indicated demonstrations will be held in Osaka, Japan, over the weekend while the G20 summit is in progress. Osaka officials are expecting a great deal of protest activity during the summit from many different parties, so they have taken precautions such as closing schools, warning local residents away from the city center, blocking off some roads, installing jammers that can block the signals used to operate drones, and deploying thousands of extra police officers.

If Hong Kong activists manage a strong presence in Osaka, it will be interesting to see if they make common cause with other groups, such as Japanese protesting China’s annexation of disputed islands and Uighur Muslim activists protesting China’s oppression of their people.

A crowdfunding campaign raised over $640,000 as of Tuesday morning to purchase front-page newspaper ads during the G20 summit urging free nations to speak out on Hong Kong’s behalf. The goal is to buy ads in major newspapers for each G20 country, including the United States, United Kingdom, European Union nations, and Japan.

“We now need your support: get our voices heard at your governments and consulates; let freedom prevail at the upcoming G20 summit and beyond. We can be saved, if you act now,” read the draft version of the open letter to be published in the ad.

Organizers of the crowdfunding campaign said money raised in excess of the amount needed to publish the open letter will be donated to a fund benefiting those who were injured or arrested during demonstrations.