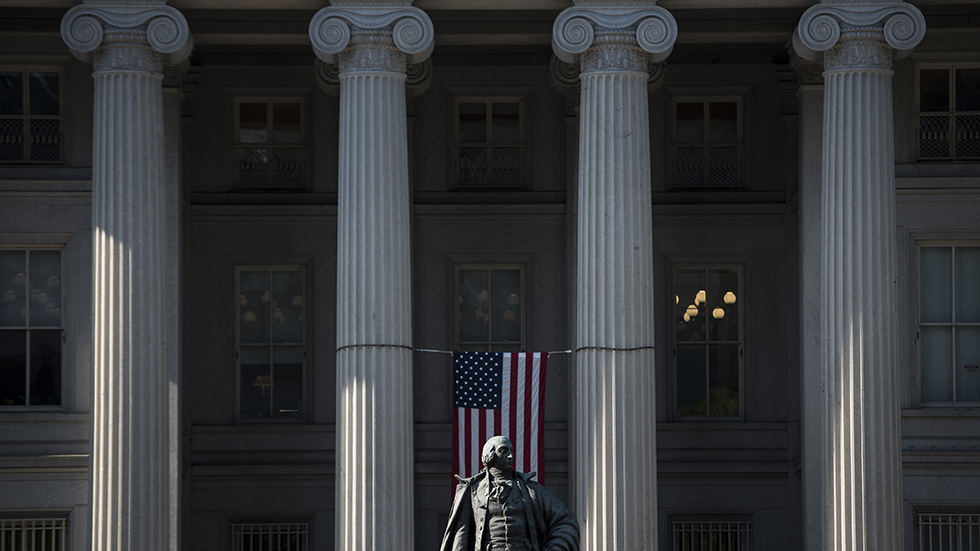 Federal debt held by the public is on track to hit “unprecedented” levels, rising from the current 78 percent of gross domestic product (GDP) to 144 percent by 2049 if current laws are maintained, according to a new report from the nonpartisan Congressional Budget Office (CBO).

But the report found that if Congress works to wipe out scheduled spending and tax changes currently in law, which include sharp spending drops set to go into effect in 2020 and the expiration of income tax cuts scheduled for 2026, debt would rise to 219 percent of GDP.

The CBO says that such debt increases could pose “substantial risks.”

“The prospect of such large deficits over many years, and the high and rising debt that would result, poses substantial risks for the nation and presents policymakers with significant challenges,” said CBO Director Phillip L. Swagel.

In the CBO’s central projection of 144 percent of GDP, the government would spend more on interest payments than the entire discretionary budget, which includes defense and all domestic programs, by 2046.

That projection is a point lower than last year, largely because of lower interest rate projections and a drop in emergency spending between 2018 and 2019.

But Swagel noted that even if interest or productivity projections were to change slightly — a situation that could swing the projection dramatically upward or downward — debt is still on track to rise precipitously.

“The upshot is that even if productivity growth or interest rates differed in meaningful ways from our projections in the direction that would tend to reduce deficits, debt several decades from now would probably be much higher than it is today if current laws generally did not change,” he said.

But current law provisions that include spending cuts and tax increases are unlikely to remain in place, meaning debt could reach the substantially higher 219 percent figure.

Congress and the White House are in the process of negotiating a spending deal that would wipe out the legal 2020 cap, which would institute a 10 percent spending cut. That cap was put in place a decade ago to force Democrats and Republicans to compromise over spending.

If a deal is struck to raise spending, as is expected, it would add a projected $2 trillion to the deficit over a decade in comparison with the current projections, which assume the lower budget caps stay in place and spending only increases with inflation thereafter.

Similarly, the GOP tax law passed at the end of 2017 only included the expiration of tax cuts to keep the law’s projected 10-year deficit in the required range to circumvent a Senate filibuster. Congress is unlikely to allow personal income taxes to sharply rise come 2026.

But taxes and discretionary spending are just part of the picture. Mandatory spending, which includes Medicare, Medicaid and Social Security, account for the lion’s share of the increase.

Rising health costs, which are projected to grow faster than the economy, as well as shortfalls in the Social Security trust fund and an aging population, make up a significant portion of the projected deficit growth.

In other words, those two programs account for three-quarters of the projected deficit in that period, whereas just a quarter comes from the tax-and-spend issues that often are the focus in Washington.

Budget hawks quickly raised the alarm over the report.

“We owe it to coming generations to create a stronger, smarter fiscal foundation. CBO’s report shows us that failing to address the debt will result in reduced opportunities, resources and quality of life for our kids and grandkids,” he added.