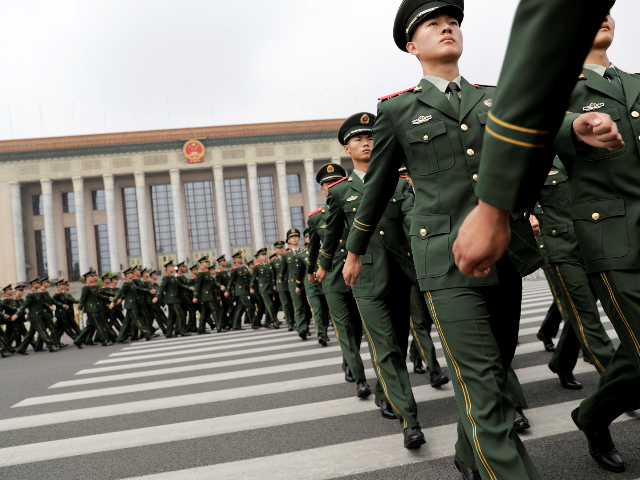 The Chinese state-run newspaper Global Times ran a full slate of columns Sunday and Monday attacking the United States’ escalating tensions with Iran, prompted by multiple attacks that Washington has published video proving were acts of the Iranian military.

The Chinese newspaper objected aggressively to the Trump administration’s “stifling and brutal crackdown on the basic well-being of” Iranians via sanctions and suggested, “China should take active measures to ensure its economic interests and stability in this region.” It left unclear what those measures should look like.

A column in the newspaper also put forward the theory that America is challenging Iran’s ongoing terrorist activities in the Middle East, Latin America, and beyond to bring the American oil industry the business Iran loses through sanctions, namely from China.

The columns follow remarks from China’s Communist Party leader Xi Jinping that Beijing is “willing to join hands with the Iranian side” following a meeting in Shanghai and from China’s foreign ministry that the nation seeks the “full and effective implementation” of the Joint Comprehensive Plan of Action (JCPOA), known more commonly as the Iran nuclear deal. President Donald Trump walked out of the deal in 2018, signed under Barack Obama in 2015, citing serial violations on Tehran’s part and its investment of the sanctions relief windfall that came its way into global terrorism activities.

Two oil tankers in the Strait of Hormuz came under attack two weeks ago – a Japanese and a Norwegian vessel – and an attack downed a U.S. drone flying in international airspace near Iran. Iran denied involvement with the oil tanker attacks and continues to do so, while it took credit for the drone attack, claiming the American military was flying it illegally in Iranian airspace. The U.S. armed forced have released video showing members of the Islamic Revolutionary Guard Corps (IRGC) removing an undetonated mine from the Japanese ship and a video showing the drone flying in international territory. President Trump called the latter a “very big mistake.”

A Global Times column on Monday predicted that “it is only a matter of time before new war breaks out in the region” thanks to America’s alleged belligerence.

“[W]hat the U.S. is doing is pushing the Middle East closer to war,” the Times predicted. “First, the U.S. abruptly pulled out of the Iran nuclear deal, despite opposition from all sides, bringing an already defused situation back to a state of tension. Then the U.S. imposed sweeping sanctions on Iran.

“Now, the U.S. is sending warships to the Persian Gulf, where military drones have been flying intensively. This is all about putting Iran in a corner,” the article continued, calling sanctions “a kind of stifling and a brutal crackdown on the basic well-being of [Iran’s] people.”

The piece also mocked what it called “Washington’s inexplicable fear of being seen as soft.” It immediately followed this statement by arguing that the United States cannot “really bring down Iran.”

In another piece Sunday, the Global Times pushed the Chinese communist regime to “take active measures to ensure its economic interests and stability in this region.” China has much at stake in the Middle East, it claims, through the Belt and Road Initiative (BRI), a global infrastructure project that would give China control of nearly all of the world’s most important transportation centers. To defend the BRI, the Times proposes (citing a former Chinese regime diplomat), China must interfere in defense of Iran. The newspaper does not go on to detail what role China should play in the global dispute.

Similarly, a different Global Times article warned that America may use Iran’s funding of terrorism as an excuse to force the Chinese government to replace the oil it buys from Iran with oil from America.

“China may have to reduce its dependence on energy exports from the Middle East, especially Iran, and reconsider buying U.S. energy products. That is perhaps exactly what the US wants to see,” the Times claimed. It proposed that this scheme may backfire on the United States because “China will be very cautious about turning to U.S. sources. The ongoing trade war has made it increasingly urgent for China to cut the links between its energy sector and those in the U.S. China must reduce its dependence on US energy to safeguard its energy security, which is always a matter of national security.”

China has consistently defended Iran in the face of protests from the United States that its radical Islamist government has invested millions in Hamas, Hezbollah, and other jihadist organizations. Most recently, Iranian President Hassan Rouhani met Xi Jinping, and Russian President Vladimir Putin, at this month’s Shanghai Cooperation Organization summit in Kyrgyzstan. There, Rouhani demanded that China and others help Iran fight “American unilateralism,” receiving a positive response from Xi.

“China has always viewed its relations with Iran from a strategic and long-term perspective … despite changes in regional and international situations, the Chinese side is willing to join hands with the Iranian side in fostering a continuous and steady development of the China-Iran comprehensive strategic partnership,” China’s state news agency Xinhua quoted Xi as saying at the time.