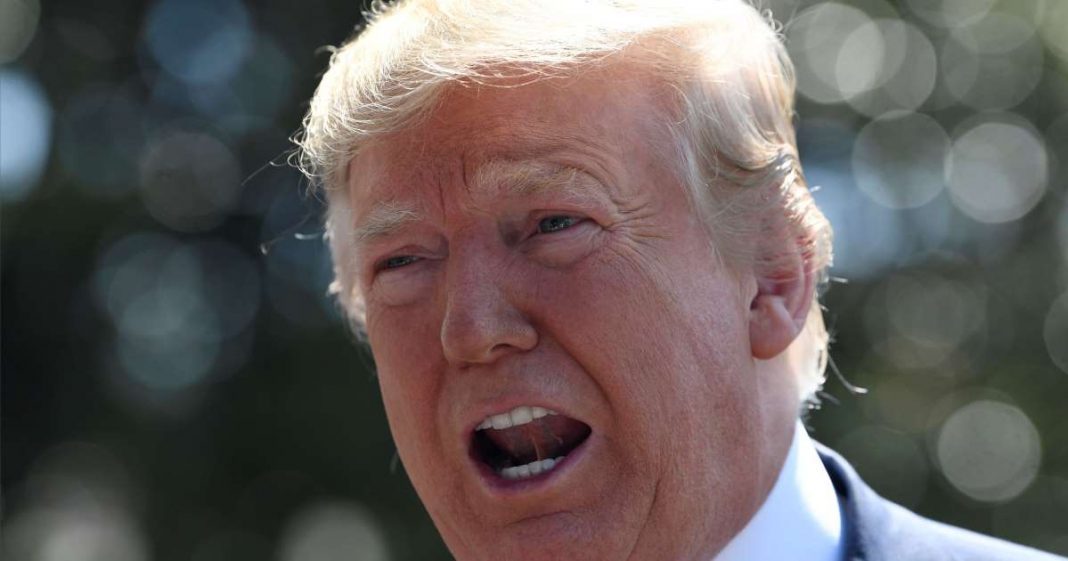 © Susan Walsh/AP
President Trump speaks to reporters on the South Lawn of the White House on Saturday. The president is increasingly employing brinkmanship in an effort to achieve key policy goals.

Three policy turnarounds by President Trump this month have underscored his freewheeling governing style, an approach that some experts warn sends mixed messages and puts U.S. national security at risk.

Trump’s approach on three issues — U.S. Immigration and Customs Enforcement raids, Mexican tariffs and Iran — is politically risky for the president, who is increasingly employing brinkmanship in an effort to achieve key policy goals.

On Sunday, Trump’s defenders, including Vice President Pence, argued that the president showed admirable caution in refusing to move forward with a military strike on Iran in light of the potential casualties.

“The president demonstrated the restraint that the American people, I know, admire and are grateful for,” Pence said on CNN’s “State of the Union.”

He added: “Iran should not mistake restraint for a lack of resolve. All options remain on the table.”

But the president’s critics are trying to turn his often erratic approach into an issue for voters.

With the first Democratic debates of the 2020 presidential race days away, several White House contenders seized on Trump’s calling off of the Iran strike as the latest in a pattern of reversals.

On CBS’s “Face the Nation,” Sen. Bernie Sanders (I-Vt.) described Trump’s actions as similar to “somebody setting afire a basket full of paper and then putting it out.”

Sen. Kamala D. Harris (D-Calif.) struck a similar note, telling CBS’s Ed O’Keefe, “I don’t believe that anyone should receive credit for a crisis of their own making.”

And Sen. Cory Booker (D-N.J.) argued that Trump’s handling of Iran has meant that “even when there are strikes on tankers, we see again our allies very skeptical to even believe us right now.”

“This has been folly,” Booker said on ABC’s “This Week with George Stephanopoulos” “There is no strategy here. We have a president that seems to be doing this like a reality TV show and trying to build more drama and trying to make foreign policy by tweet.”

Larry Jacobs, a political science professor at the University of Minnesota’s Humphrey School of Public Affairs, said that Trump’s behavior has generated confusion about what the country’s positions are.

“Ronald Reagan was very clear, there’s no ambiguity about his views about the world and his willingness to pursue them. None,” he said. “Sometimes he was criticized . . . but there was a clarity and a consistency and a pattern that was established.”

With Trump, in contrast, “both our allies and our enemies are at a loss to understand what the president means,” he said.

The results of Trump’s strategy on policy have been mixed at best — and few issues offer as complete a picture of the president’s habitual brinkmanship as his effort to overhaul U.S. trade policy.

Last month, he abruptly threatened to impose tariffs on all Mexican goods entering the country to force Mexico to tighten its southern border against migrants fleeing Central America. He gave Mexican authorities 10 days to show progress or face a 5 percent tariff on the roughly $346 billion in goods Mexico ships each year to the United States.

Trump drew criticism for using trade to address an unrelated issue and for contradicting the spirit of the new U.S.-Mexico-Canada-Agreement, designed to facilitate trade among the North American neighbors.

But the threat prompted Mexican officials to race to Washington to negotiate tougher border security measures, ultimately including deployment of about 6,000 Mexican national guardsmen to the country’s border with Guatemala.

It wasn’t the first time Mexico had felt the sting of the president’s negotiating style. In late March, Trump threatened to close the border with Mexico in an earlier move to spur action against migrants. He backed down following an outcry from American business leaders who feared massive disruption to industrial supply chains.

Trump also came to the precipice of withdrawing the United States from the North American Free Trade Agreement on his 100th day in office, but pulled back after pleas from Mexican and Canadian leaders. He held the threat of quitting the deal over subsequent negotiations aimed at the new UCMCA, which awaits congressional action.

Trump’s threats spurred Mexico and Canada to accept provisions they had resisted in negotiations that resulted in the Trans-Pacific Partnership, a 12-nation agreement negotiated by the Obama administration that Trump quit on his fourth day in the White House, according to Dan Ujczo, a trade attorney at Dickinson Wright.

“Whether one wants to admit it or not, the president is driving hard bargains and getting results,” Ujczo said. “The question will be at what cost in the mid- to long-term. That is, what happens when other countries start using the same tactics against the U.S.?”

Trump has also engaged in serial rounds of tariff-heavy diplomacy with China. He threatened last year to increase tariffs to 25 percent from 10 percent on $200 billion in Chinese goods starting Jan. 1. But one month before the deadline expired, over dinner with Chinese President Xi Jinping in Buenos Aires, Trump agreed instead to give negotiators 90 days to reach a deal.

Days before that deadline, Trump again delayed, citing “substantial progress” in the talks. He set no new deadline, but in early May after talks collapsed, he implemented the tariff hike.

He also began the process of imposing tariffs on an additional $300 billion in Chinese imports, potentially creating a fresh obstacle to reaching a trade deal with Beijing. Chinese officials have insisted that all tariffs be removed as part of any deal that addresses the president’s complaints about China’s trade practices.

“Trump’s threats work to some extent against weak targets, but not against stronger ones. Canada and Mexico, which are so dependent on exports to the U.S., have been willing to make tough concessions rather than risk serious harm to their own economies. Korea, which is so dependent on the U.S. security umbrella, was also willing to do a quick deal,” said Edward Alden, an economics professor at Western Washington University. “But bigger trading partners — China, the E.U., even Japan — have proved far less compliant.”

Meanwhile, Trump’s announcement that he had directed ICE agents to conduct mass arrests of migrant families that have received deportation orders — and subsequent two-week delay of the operation — appears to have fallen flat so far. Democrats have responded not by scrambling to the negotiating table but rather by accusing him of government by hostage-taking.

Some Democrats on Sunday pointed out that Trump’s advance declaration of the raids appeared to inadvertently violate his administration’s guidance. They noted that in a statement Saturday night, ICE spokeswoman Carol Danko said in part, “Any leak telegraphing sensitive law enforcement operations is egregious and puts our officers’ safety in danger.”

“President Trump gives millions facing deportation two weeks before his next tweet attack,” Durbin, the No. 2 Senate Democrat, said in a Sunday tweet. “Their fate depends on whether Congress will allow him to indefinitely jail children. This is America?”