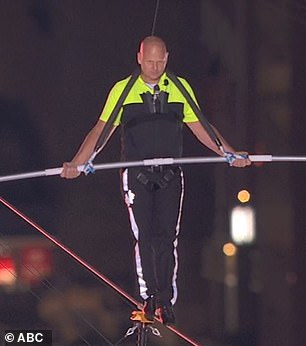 The Flying Wallendas triumphed the New York skies in a daring never-before-attempted stunt where they successfully crossed a 1,300ft-long high-wire set 25-stories high across two sky scrapers in Times Square, all without a safety net.

It was an incredible comeback for daredevil Nik Wallenda and his sister Lijana after she took a catastrophic fall during a high-wire stunt in 2017 and broke every bone in her face and suffered additional injury to her ribs and foot.

Around 9:20 on Sunday Nik Wallenda took the first steps in the gravity-defying act and Lijana followed soon afterwards marking her first stunt since the 2017 accident, singing hymns as she went.

Nik strutted out with confidence saying ‘If you can make it in New York you can make it anywhere’. But his sister Lijana was delayed in her walk as she gave a last minute nervous glance over her safety gear.

In the stunt Nik and Lijana wore safety harnesses – something Nik usually opposes – as they braved the wire that’s just three-fourths of an inch wide, the same width of a quarter. 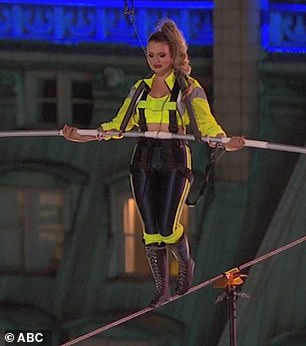 The Flying Wallendas, consisting of siblings Nik and Lijana Wallenda, made history on Sunday when they successfully crossed a 1,300ft-long high-wire between two skyscrapers in Times Square 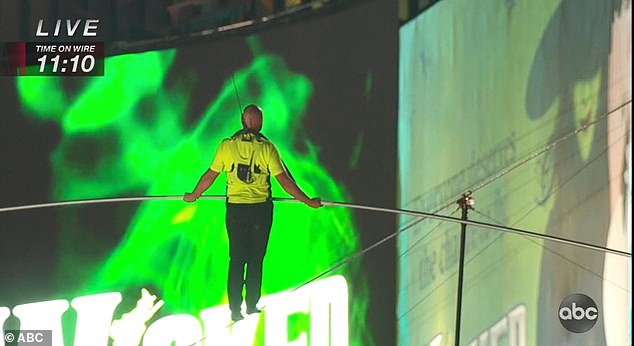 The stunt began around 9.20pm on Sunday with Nik taking the first steps onto the wire 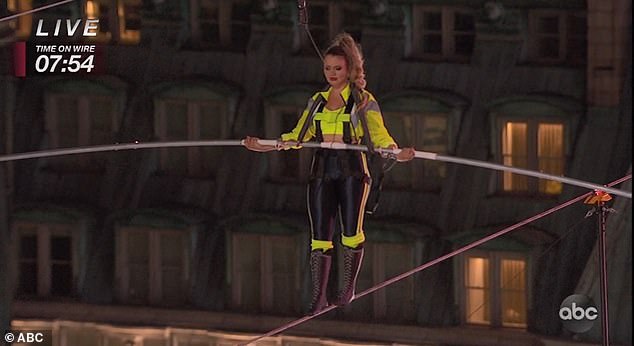 Lijana nervously followed afterward her brother onto the daunting high-wire. It’s her first stunt since her catastrophic 2017 accident where she fell while performing a human pyramid and broke all the bones in her face 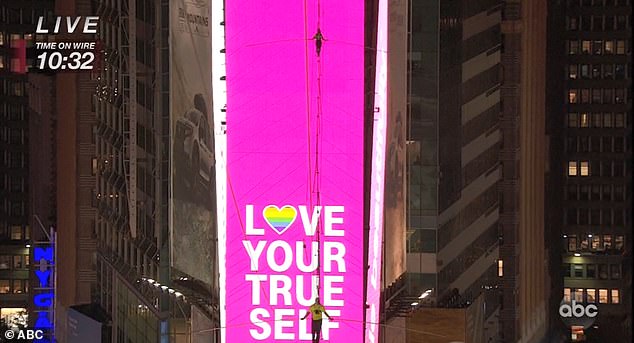 Don’t look down! The two tried to ignore the blaring billboard ads and the noise of the crowds below as they walked towards each other

The two started on opposite ends of the wire and slowly and steadily made their way across to meet in the middle. Lijana then sat on the tiny wire as her brother Nik crossed over her before she got back up and continued the walk.

At 26 minutes Nik made it to the other side of his wire successfully, as his sister lagged behind. The duo estimated it would take between 20 to 30 minutes to finish the wire.

Despite the nerves and noise, Lijana victoriously made it to the end of the rope at the 36 minute mark.

As she made her way she sang praise songs to herself to drown out her shaky, uneasy breathing. As she walked she told herself inspirational messages such as ‘fear will not overcome me’.

Finally, she made it to the other side and her wary face was replaced with a beaming smile as she met her brother and shared a warm hug. 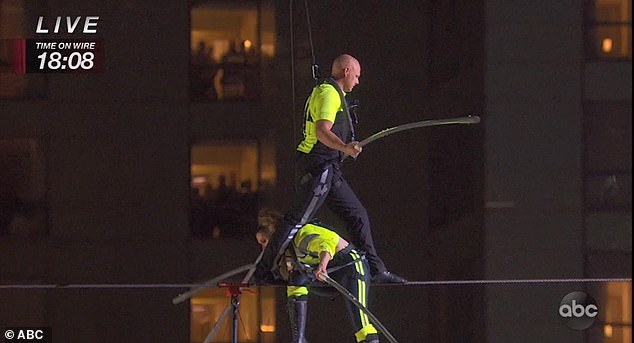 The dangerous cross over: Slowly Lijana lowered herself on the wire as Nik stepped over her 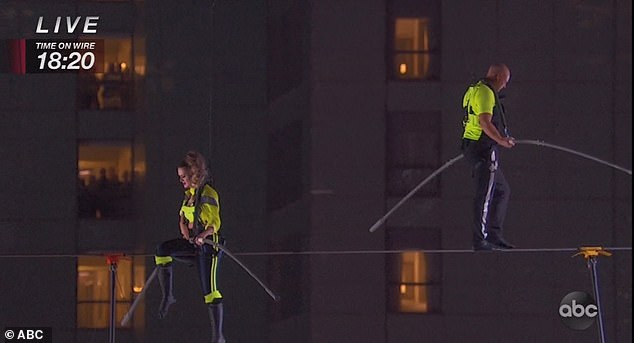 Moving on: After Nik walked over Lijana she picked herself up off of the wire and continued to steadily walk on the thin high-wire 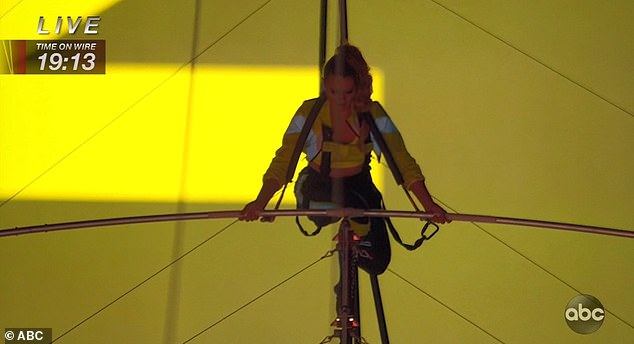 The midpoint: The two started on opposite sides then met in the middle where Nik cross over Lijana as she sat on the wire 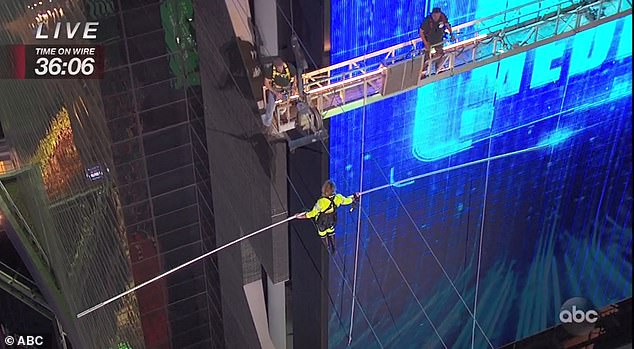 Nik finished his walk at 26 minutes and Lijana lagged about 10 minutes behind, finishing at 36 minutes 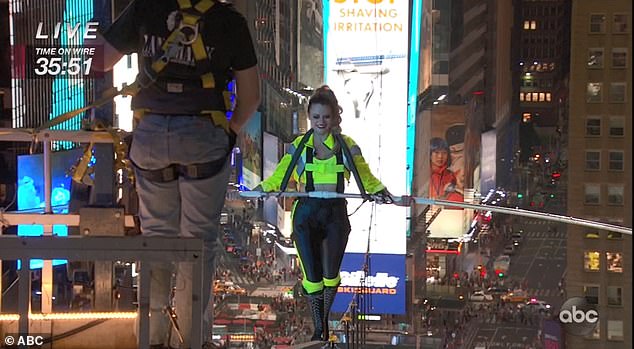 Made it! Lijana began to beam as she made it close to the finish line, overcoming her nerves to complete a never-before-done stunt that will go down in history books 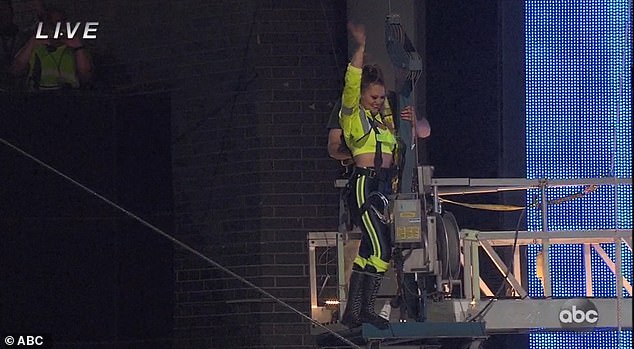 ‘I knew I’d get back on the wire. It’s my life. It’s my passion,’ Lijana said before her walk. Pictured successfully making it to the other end and waving to the adoring crowd 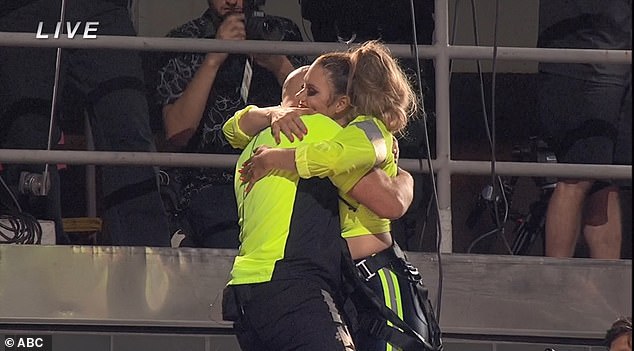 ‘I knew I’d get back on the wire. It’s my life. It’s my passion,’ Lijana said on ABC in an interview aired before her walk.

‘This is who I am. This is what I love. it’s still hard sometimes. I doubt sometimes. But I put my trust completely in God and believe he has given me the mental strength,’ she added.

Prior to heading out Lijana said she was nervous about her ankle – the same that was injured in the fall – saying it was a bit swollen after walking around the city in a shaky pre-stunt interview.

When asked why she dared to walk out again she said, ‘Walking the wire is my passion. But I kind of lost that and forgot who I was after the fall…And I finally remembered who i was through this whole training.’

Before Nik and Lijana headed to the wire they waved to fans and received a prayer by Pastor Joel Osteen. 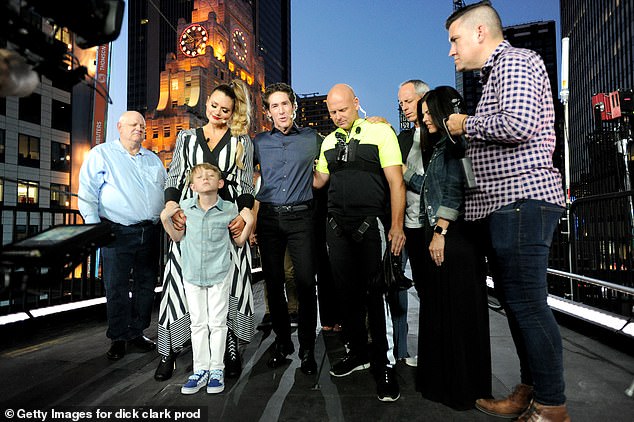 One for the books! Lijana and Nik pictured with their families as Pastor Joel Osteen prayed for them ahead of their walk 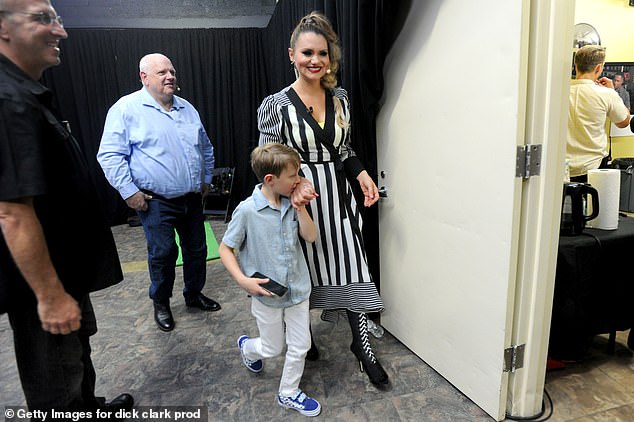 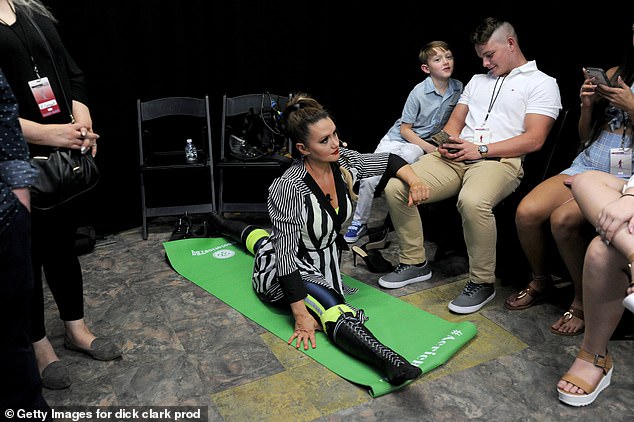 The preparation: Lijana stretches in a splits before heading out on the high-wire 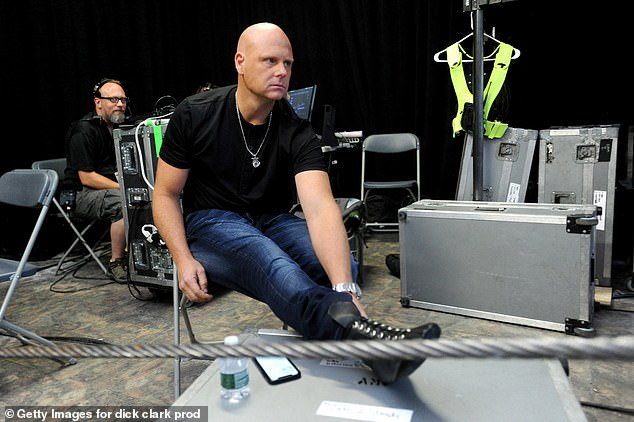 Nik also made sure to stretch before the death-defying stunt 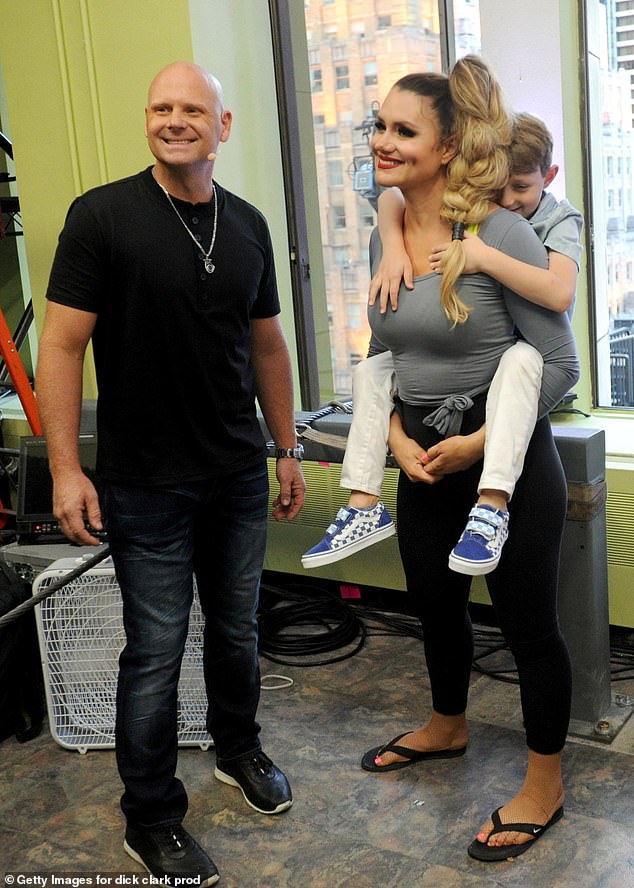 A supportive family: The siblings pictured smiling before the adrenaline-pumping act 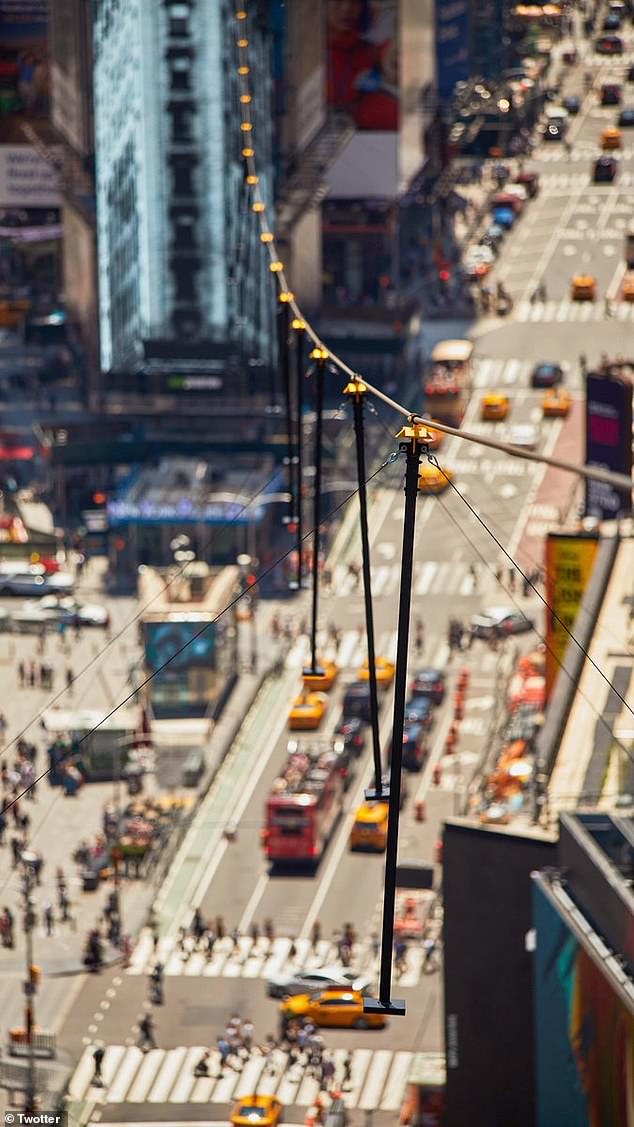 In the stunt they’ll cross a quarter-wide 1,300ft-long high-wire set 25-stories high across two sky scrapers in Times Square. a close up of the wire set-up pictured above

In the 2017 incident Lijana was attempting an eight-person pyramid stunt during a Circus Sarasota rehearsal when she and four other performers fell 40 feet to the ground.

Following the incident, Nik is more than happy to wear safety harnesses.

‘In this situation especially, with my sister involved, I do feel like it’s very important,’ he told The Wrap.

‘With everything that she’s gone through, and that near-fatal accident that she went through a couple years ago that we were all involved in, I just think it’s important.’ 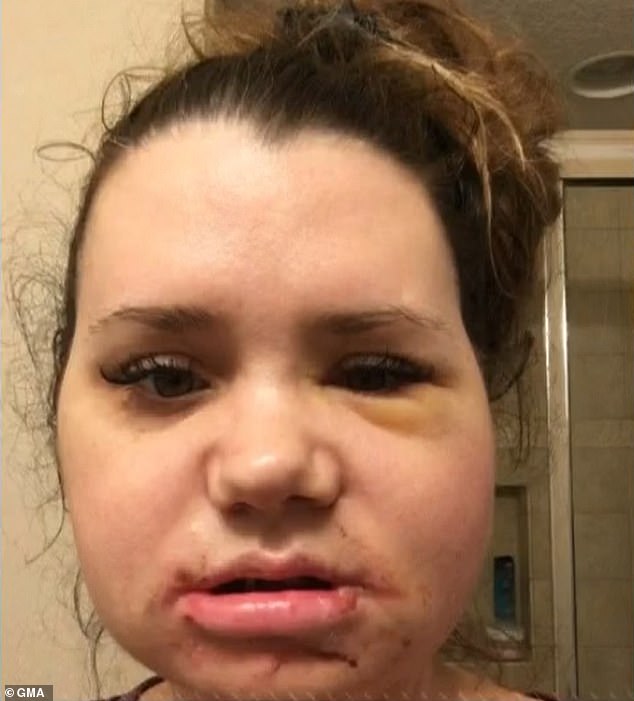 Lijana Wallenda’s horrifying injuries after she fell 40 ft from a high wire in Sarasota in 2017, breaking every bone in her face. She had to have 72 pins put in place to reconstruct it

Lijana had to have 72 pins put in her face and some in her foot. One of her X-Rays is shown 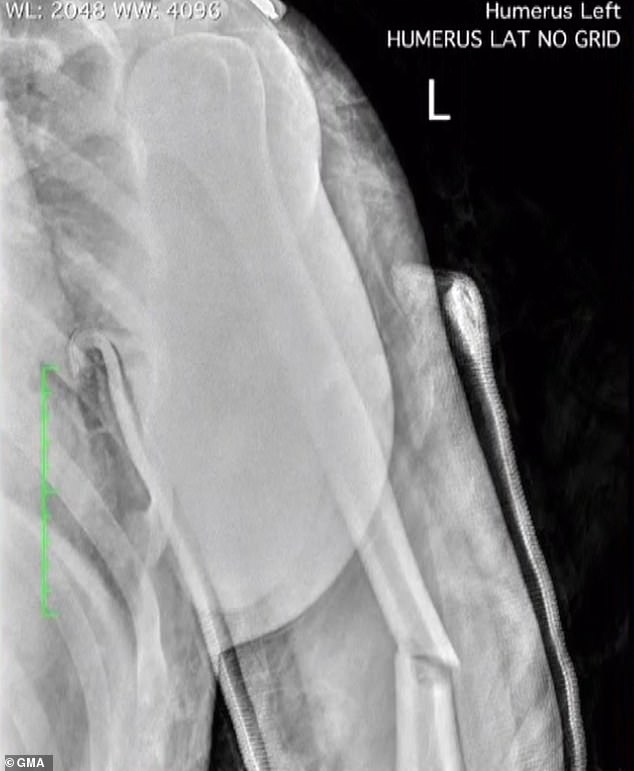 The performer also broke a bone in her upper left arm. It is shown in an X-Ray above 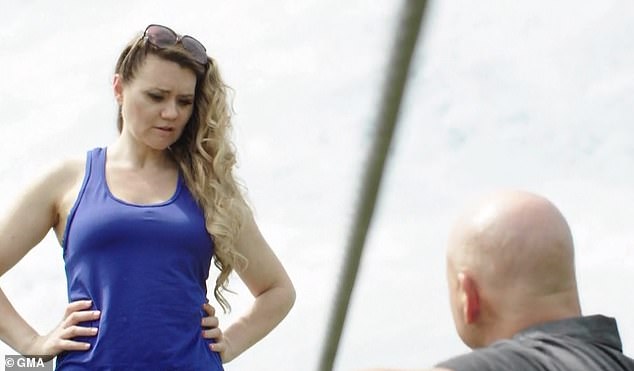 Lijana is shown practicing for Sunday’s Times Square stunt with her brother, Nik. She said she was nervous in the clip because the wire was moving lots

‘To be honest, I don’t think that I would allow her to do this — not that I control her, but I just wouldn’t be comfortable,’ he continued. ‘And I feel like I would be foolish at that point. So, for this one it was a little easier to comply than normal, though it is not my favorite situation, it’s not the ideal situation.’

The Wallendas come from a long-family of acrobats dating back to the late 1700s.

Their first stunt in the U.S. was in 1928 at Madison Square Garden.

Nik Wallenda currently holds several Guinness World Records and is best known for crossing the Grand Canyon and the Niagara Falls while precariously balancing on a tight-wire.

Just earlier this week Lijana shared images of her horrific injuries from the 2017 injuries showing her bloated face from her broken bones and her broken ribs and foot.

Prior to Sunday’s act she said she rehearsed the 1,300ft walk 25 times through windy conditions and even had pine cones thrown at her to prepare her for the distractions of Times Square.