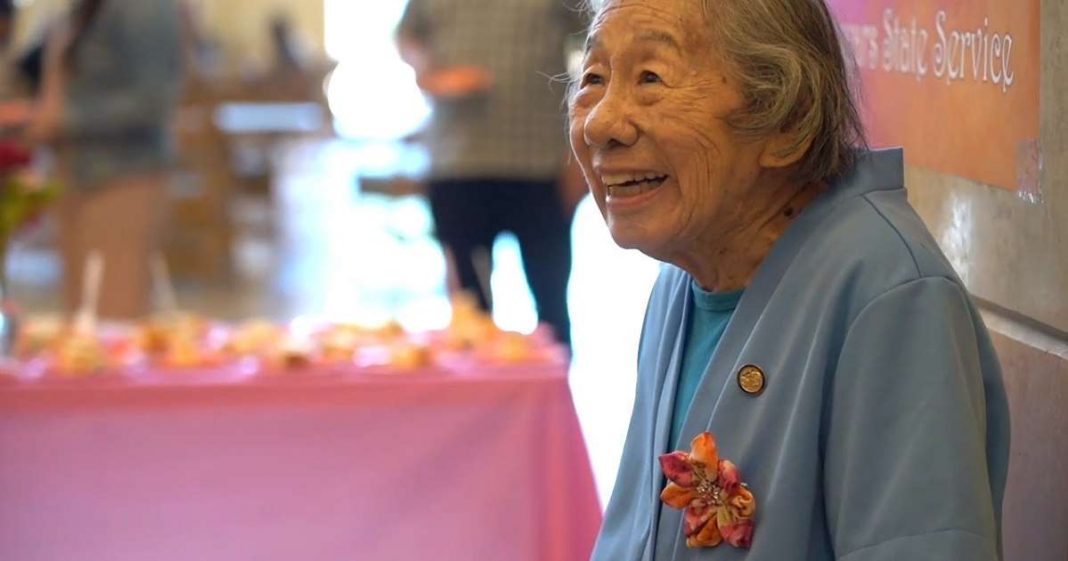 © Autumn Payne/Sacramento Bee/TNS
Department of General Services analyst May Lee celebrates her 99th birthday at the ziggurat office building in West Sacramento on June 20, 2019, as she is honored for working for the state of California for 76 years. Lee will turn 99 on Sunday, June 23.

May Lee drives herself to work nearly every day at 6 a.m. Her job involves saving the state of California millions of dollars every year through audits and analyzing budgets. Oh, and she turned 99 on Sunday, June 23.

Lee, who is of petite stature and moves about with a walker, said she just loves to work. Her philosophy: “If you keep busy, you enjoy life.”

Lee joined the California Department of Finance in 1943. Things were different back then, she recalls. There was no air conditioning. Women couldn’t wear pants to work. Calculations were done using a comptometer.

When the Department of General Services was created in 1963, she was one of the first employees and worked until she “retired” in 1990.

But for her, retirement means working four days a week as a retired annuitant. And, after exhausting her annuitant hours each fall, she continues to work as an unpaid volunteer.

“My license is good until 100,” she said matter-of-factly.

Over the years, Lee has served under 10 governors. She met Gov. Jerry Brown in 2012 and last week met Gov. Gavin Newsom while celebrating 76 years of service.

Her impression? He’s tall, she said. However, Lee has met someone else just about the same height as her — Mother Theresa.

Before Lee got her walker, she traveled frequently — she’s been to 150 countries, she said. On one of her trips, she went to Calcutta, India with a tour group. She asked the bus driver to take her to the mission where Mother Theresa was.

“Everybody went shopping and I don’t like shopping,” she said. When she walked in, she made a donation and Mother Theresa invited her to eat lunch with her.

“It was short, so I had to do it quick,” she said, as the bus was waiting outside to take her back to the group.

Through all her worldly travel, Lee has always lived in Northern California.

She was born in Elk Grove and raised on a farm in Isleton, where her family grew pears, apricots and cherries along with tomatoes, corn and beans. Her two living siblings, a brother and a sister, live in Sacramento and San Francisco. She has many nieces and nephews scattered across various states, including one that lives with her.

Lee speaks haltingly and co-workers sometimes have to raise their voices so she can hear them. But her memory seems crystal clear as she recalls events from decades ago down to the exact details.

What’s the secret to Lee’s health?

Eating the right food is part of it. For her daily diet, Lee said she’s stuck to the same philosophy for decades.

“You get the vegetable — one up, one down, that means leafy vegetable and root vegetable, and eat one grain and one protein,” she said, describing how each meal should be broken down into.

Which is not so easy when you don’t cook — a skill Lee says she never learned. Instead, she freezes a week’s worth of restaurant food at a time for her meals.

Before Lee started using her walker, she would go to work early and walk up and down the stairs in the parking garage for an hour. She doesn’t do that walking now but still doesn’t sit while working.

“For 50 years I never had a chair in my office,” Lee said, adding she now does her work while standing behind her walker.

Her co-workers are her adoring fans and eagerly ask her to tell some of their favorite stories. One of them is the story of Lee’s contribution to changing the state constitution.

Back when Lee was still a student, Article 19 of the California constitution barred Chinese Americans from being employed by any corporations in the state or on any state, county, municipal or other public work, and gave cities the power to remove people of Chinese descent as they saw fit.

As Lee tells it, she wrote a paper and sent it to the California Senate, arguing that Article 19 was in violation of the 14th, Ninth and Fourth Amendments to the United States Constitution. Shortly after, she was invited to present her paper on the Senate floor.

“In the Senate journal you’ll find my name on May 12, 1945, I’ve been a guest there,” she said proudly. That section of the state constitution was repealed years later.

“I don’t tell too many people about that because it’s past history,” Lee said.

But Lee is a part of the very history of the Department of General Services.

She was the first Chinese American to be hired in the Department of Finance, she said. Then, she joined General Services at the ground-level. All the new procedures, codes, and systems? Lee created them.

“She’s got so much institutional knowledge (her co-workers) always come to her to find out how did they do that, or how did they work this way,” said Michael Liang from the Office of Public Affairs.

“What’s the logic behind it? It’s the logic of May,” said Ann Marie Santana, a co-worker from the Facilities Management Division where Lee currently works. “She can still cite state contractors’ manuals and government codes; she is like an encyclopedia.”

When Lee left accounting to go to budgets within the Office of Fiscal Services, a former co-worker recalled that it took nine people to replace her, her manager Gary Lee wrote in her recommendation for an award.

Not only has Lee made an immeasurable impact on General Services, it’s clear that she has touched the lives of the people gathered around her. Enid Merchant, a budget analyst, said Lee inspired her to get her accounting degree.

Merchant first came to the department as a “Kelly girl,” a term for temporary workers.

“I saw her flipping a magazine and I said, ‘Are you bored?’ and she said, ‘Yes,’ and I said, ‘You wanna help me?’ ” Lee said. Lee trained Merchant to audit phone bills, getting her a job with the department, and Merchant eventually went back to school to become an accounting officer.

In her spare time, Lee reads voraciously. She cuts out articles she finds interesting and brings them to her co-workers. Merchant, who is retiring at the end of this month, receives articles about retirement. Santana, a frequent traveler, gets articles from travel magazines and also crosswords. Co-worker Carol Weathers gets articles about back pain and migraines.

“For me, it’s just her genuine respect and admiration of people, and that everybody is important in what they do, “Weathers said. “She has genuine respect for every person, at every level. It doesn’t matter who they are, from the janitor to the director, every job is important, and she acknowledges that.”