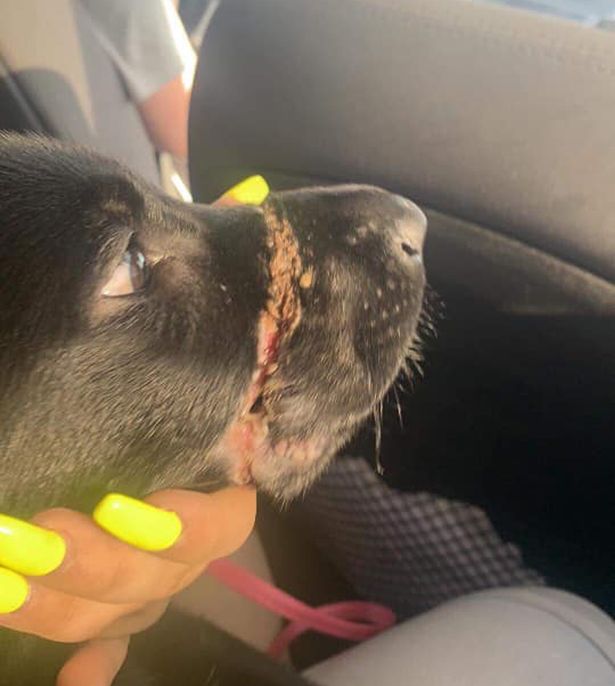 A cruel dog owner taped her puppy’s mouth shut with a hair tie for two weeks in order to stop it barking, it is claimed.

Alexis Callen admitted that she tied four-month-old Shadow’s snout for two days – but vets believe that it was shut for about two weeks.

Callen, from Murray, Utah, initially claimed that a neighbour was responsible for tying its snout but later admitted to authorities that it was her.

The 19-year-old now faces felony animal cruelty charges after she was reported to police by concerned animal welfare workers.

Callen was caught when she posted Shadow’s injuries to Facebook , saying that she needed to rehome her because she couldn’t afford the vets bills.

The images show how Shadow’s mouth was left badly exposed due to her owner’s actions.

The teen’s post read: “My puppy got hurt badly and I don’t have the expenses to pay for her to go to the vet to get stitches, so I’m here to rehome her.

“She’s a Lab German Shepard mix. Pm me for info,also anyone who bashes on me will be blocked from talking to me.”

Her reply reads: “I had to make an emergency trip to see my family so i had someone in my complex watch her.

“When I got back her snout was tied shut and swollen, i tried to do what i could to help her but i don’t have the expenses to pay for her to get stitches or healed properly.

It goes on: “It wasn’t even a muzzle that they used, they said they did it because she wouldn’t stop whining.”

“When I got back her snout was tied shut and swollen, i tried to do what i could to help her but i don’t have the expenses to pay for her to get stitches or healed properly.

They are hopeful that the puppy can make a full recovery.

The group said: “Shadow had to go back to the vet today for a cone, but even though she is not happy about her cone, she is happy to report that thanks to the quick action of the Murray Animal Control officers, an arrest has been made on felony animal abuse charges.

“We are thrilled at the quick action and hope that justice is found. She still has a long road and surgeries ahead of her, but she’s expected to make a full recovery.”