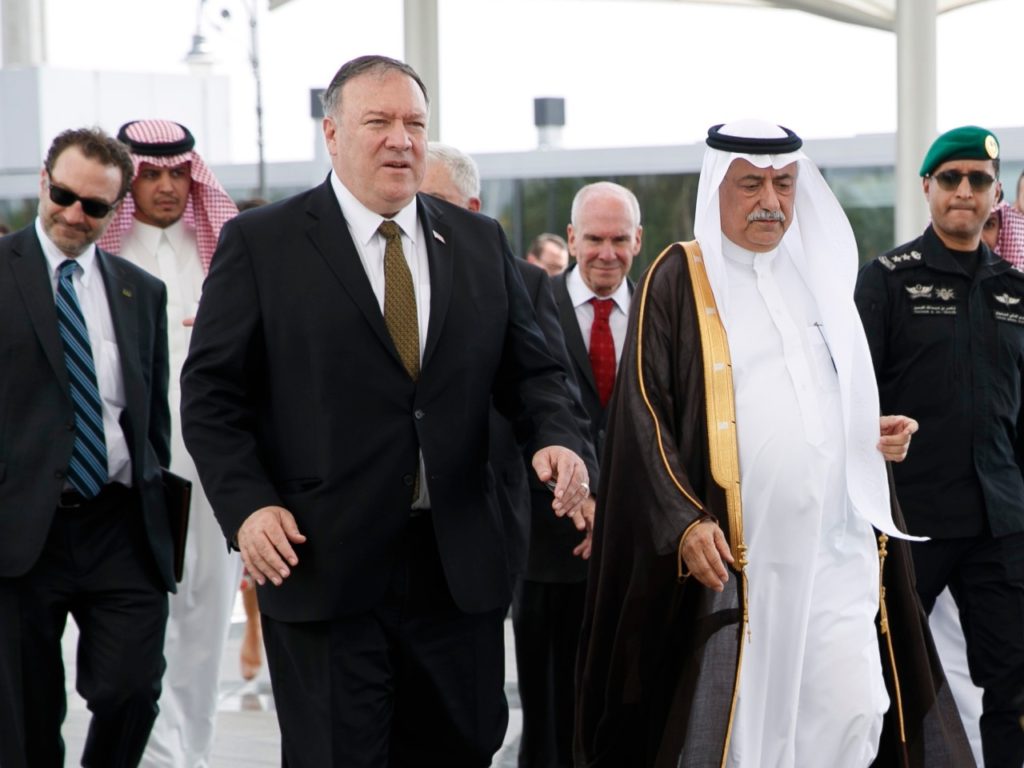 In the UAE, the secretary of state will discuss maritime security and heightened tensions with Sheikh Mohamed bin Zayed, Crown Prince of Abu Dhabi and Deputy Supreme Commander of the Armed Forces.

His trip was only announced late last week as an addition to a visit to India. Mr Pompeo called the UAE and Saudi Arabia “two great allies” in tackling the challenge that Iran presents.

He said the United States sought a regional coalition “not only throughout the Gulf states but in Asia and in Europe that understands this challenge and is prepared to push back against the world’s largest state sponsor of terror”.

I’m heading out today. Our first stops will be in the Kingdom of Saudi Arabia & the UAE, two great allies in the challenge that Iran presents, and we’ll be talking with them about how to make sure that we are all strategically aligned and how we can build out a global coalition. pic.twitter.com/txu0pA2xr4

Iran’s Foreign Ministry spokesman Abbas Mousavi said the country would welcome a defusion of tensions in the region.

“We welcome defusion of tensions in the region. We do not want rise of tensions,” he was quoted as saying by the ISNA news agency.

The U.S. launched a cyber attack on Iranian military institutions in response to the downing of a U.S. Navy drone last week. On Monday, Iranian Telecommunications Minister Mohammad Javad Azarari Jahromi denied there had been a successful attack against the country, despite repeated attempts.

UK Foreign Secretary Jeremy Hunt, one of two politicians in the running to be the next prime minister, has said Britain would consider joining the U.S. in military action against Iran.

On Monday, Mr. Hunt reiterated his concern about the ecalating Middle East situation on BBC Radio, warning of the danger of “an accidental war,” adding that the UK has been in close touch with the United States.

“We have been doing everything we can to de-escalate the situation,” Mr Hunt said.