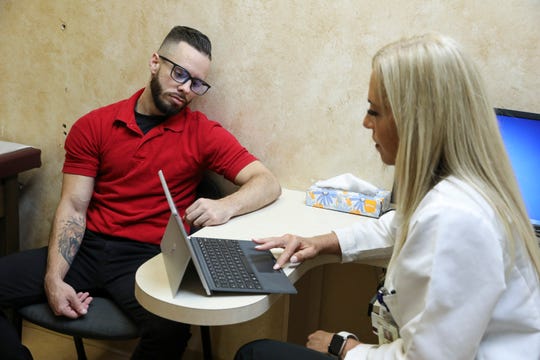 New York resident Mickey Saxbury worked on a General Motors assembly line for 25 years before sharp, throbbing back pain from an on-the-job injury forced him to retire.

A back operation failed. A device to block his pain gradually became ineffective. The only thing that’s consistently worked, he says, is pain medication.

But a judge overseeing his New York State Workers Compensation Board disability case ordered that his opioids be sharply reduced.

“They dropped me so far down that I can’t even get off the couch anymore,” said Saxbury, 61, who lives near Buffalo.

Chronic pain patients such as Saxbury are becoming increasingly vocal about what they say is a medical community that’s shutting them out. The Centers for Disease Control and Prevention issued guidelines in 2016 to cut back prescriptions after years of liberal opioid dispensing contributed to addiction and overdose deaths.

Those guidelines not only influenced doctors – state regulators, health insurers and even disability administrators also have cited these federal guidelines to justify policies that limit pain pill prescriptions.

Last month, the CDC clarified its position, saying that the response to the opioid crisis went too far. In a New England Journal of Medicine editorial, a panel of experts cited examples such as inflexible thresholds on dosages, abrupt tapering and misapplication of the guidelines for people with cancer, sickle cell disease or recovering from surgery.

Dr. Joshua Sharfstein, a former health secretary of Maryland and health commissioner of Baltimore, said he supports how CDC’s clarified guidelines reconcile the risk of opioids with their need.

“The right thing is to follow that balance,” said Sharfstein, who is now a professor and vice dean at Johns Hopkins Bloomberg School of Public Health. The guidelines “shouldn’t be used as a kind of cudgel to reduce appropriate prescribing.”

Chronic pain sufferers ‘between a rock and a hard place’

Many chronic pain patients question whether the revised policy will bring them relief.

Saxbury took a powerful opioid, oxycodone, to manage throbbing lower back that radiates down his left leg. His prescription remained steady for several years: 30 milligram pills, four times each day.

But the New York State Workers Compensation Board, which oversees his case, tapped a medical expert to review Saxbury’s medical chart. The expert, Dr. Chris Grammar, who never physically examined Saxbury, concluded he was being prescribed unsafe levels of opioids.

In his report to the New York board, Grammar cited the state’s non-acute pain medical treatment guidelines and CDC data on overdose deaths linked to opioid prescriptions. He added that Saxbury’s pain doctor’s high-dose opioid prescriptions are “no longer supported.”

“This is not to be critical of his treating physician as this approach is relatively new,” Grammar wrote. “However, in the absence of functional improvement, this patient is undergoing extraordinary risk with little benefit.”

Based on the judge’s decision, Saxbury said his doctor cut his daily pain prescription by half. He cannot muster the energy or tolerance to do many daily activities. And his planned move to Arizona to escape a cold climate that makes his pain worse and live near family seems more daunting than ever.

Saxbury said he has unsuccessfully pleaded with his doctor to reconsider the pain pill reduction.

“My pain-management doctor said they cannot give me the medication because they could lose their license,” Saxbury said. “I’m between a rock and a hard place.”

Grammar declined to discuss the specifics of Saxbury’s case with USA TODAY. But, in general, he said medical evidence does not support long-term opioid use for chronic pain patients.

He said pharmaceutical companies such as OxyContin maker PurduePharma have not proved in medical studies that long-term opioid use alleviates chronic pain.

Patients who have become dependent on opioids now feel scapegoated as more doctors scrutinize the use of the pain medications.

“With few exceptions, the patients are innocent,” Grammar said. “They’re not writing the prescriptions.”

States have responded to the addiction crisis by passing laws that aim to reduce opioid prescriptions.

As of October 2018, 33 states have passed laws that limit or impose requirements on opioid prescriptions, according to the National Conference of State Legislatures.

Most of these states limited initial pain pill fills to seven days, with some states imposing even more aggressive cutbacks that limit fills to three or five days.

Last July, Florida passed a law requiring physicians to register as chronic pain clinics to prescribe more than three days worth of opioids. Dr. Melanie Rosenblatt, who is a pain doctor and certified in addiction medicine, said the law has had a “chilling effect” on prescribing. Many of her new patients were dropped by their former physicians or “would doctor shop until they got what they want.”

Federal statistics show total U.S. opioid prescriptions have declined each year since 2012. However, that trend accelerated since the CDC issued guidelines.

John Downey, a pain doctor in Augusta, Georgia, argues that the “damage has been done” from restrictive state laws and reluctant prescribers.

Downey served a three-year term on the Georgia Medical Board through mid-2018 and chaired the board’s pain committee. He told colleagues he was not interested in another term because his medical practice was so busy with patients turned away by other doctors.

One Monday morning, he had 50 referrals for new patients “just because doctors are saying they are fed up,” Downey said.

While he was on the medical board, he developed a point-based worksheet for family doctors who treated pain patients. The goal: Help doctors determine whether pain patients are willing to complete therapy and try non-opioid therapies such as injections, rather than only seeking pain pills.

Medical board investigators who see patients taking the same prescription every month might see signs of abusive prescribing or a “pill mill,” said Downey.

But he said such patients often are able to maintain regular activities such as working, spending time with family or going to church.

“From a pain perspective, that is a well-managed patient,”  Downey said. “They are stable.”

Doctors are ‘terrified of addiction’

Sharfstein, the former health secretary of Maryland, said “there’s been a big whiplash” as doctors react to the opioid epidemic which was fueled by years of permissive prescribing.

“Doctors were told they should treat pain as much as possible and now might be hearing the message they they could get in trouble for any opioids,” he said.

Dr. Joshua Sharfstein and Dr. Yngvild Olsen are co- authors of The Opioid Epidemic: What Everyone Needs to Know. (Photo: Isak Sharfstein)

Sharfstein and his wife, Dr. Yngvild Olsen, an addiction medicine physician, wrote the book The Opioid Epidemic: What Everyone Needs to Know. In it, they argue that doctors need to be trained to detect and treat addiction. Most medical residency programs don’t teach how to care for patients who misuse substances.

An epidemic and its response:

Did the crackdown on opioid prescriptions go too far? Here’s why doctors are reconsidering.

Naloxone can reverse opioid overdoses, but does the drug belong in elementary schools?

Doctors are “terrified of addiction and need to understand it and treat it,” said Sharfstein.

Garrett Greene, 27, was dropped as a patient by his pain management doctor last month. He said the doctor told him he wasn’t comfortable seeing a cystic fibrosis patient.

Greene said he was taking about a 90 milligram dose of the opiod Percocet every day to control pain since he had surgery seven years ago after his left lung collapsed twice. He’s had many other surgeries and blood clots.

“I spent the better part of my twenties cooped up in the hospital watching firsthand how this monster of a disease can rear its ugly head,” said Greene.

Late last month, Greene went through what he calls “a horrific detox” while he was “losing my mind” trying to find a new pain doctor. When he found Rosenblatt, she switched him to buprenorphine, which is also an opiate but one that is used to help wean people off heroin and other opioids. Percocet, said Greene, wasn’t good for his lungs long term and could suppress his breathing.

Cystic fibrosis patient Garrett Greene, of Coconut Creek. Fla. had been prescribed percocet, a pain medication containing a combination of acetaminophen and oxycodone. This spring his former pain management doctor dropped him suddenly leading to what he said was horrible withdrawal. (Photo: Crystal Vander Weit, for USA TODAY)

Rosenblatt finds she often has to change new clients to longer-acting opioids, as well as combinations of physical therapy, antidepressants, muscle relaxants and therapy to help improve sleep.

“Most of the time it works out really well and there is a silver lining in many cases because people get the appropriate specialist,” said Rosenblatt. “For other people, not so much, because they go through crazy withdrawal after doctors just cut them off, go to jail or retire with no exit plan.”

Former Food and Drug Administration Commissioner Dr. Scott Gottlieb said regulators “arguably had to play catch up” with the opioid crisis, which he calls the “biggest public health crisis in modern history.”

Regulators “had to take dramatic action to intervene,” he said. “It was inevitable there were going to be public health consequences at the margins.”

As for doctors, they have been “overshooting in both directions” – first over- and now often under-prescribing.

“You are seeing doctors too reluctant” to prescribe opioid painkillers now, said Gottlieb, now a resident fellow at the American Enterprise Institute. “It was inevitable they were going to land there.”