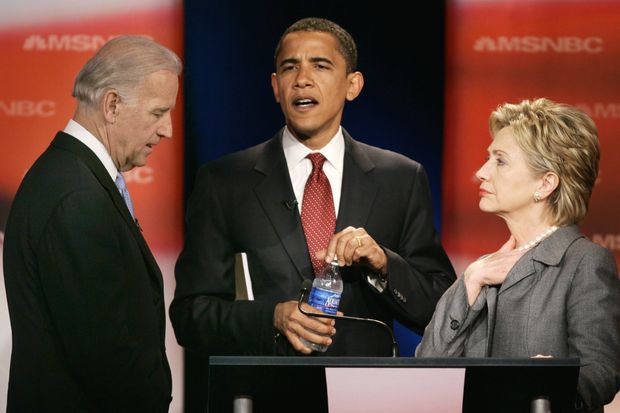 Former Vice President Joe Biden will take center stage in his first 2020 Democratic debate, and he is likely to be the main target for his presidential-primary rivals.

Mr. Biden will appear in Miami on Thursday in his third bid for the White House and first as front-runner—and as the most experienced debater in the 2020 campaign. The 76-year-old has participated in at least 16 debates as a presidential or vice-presidential candidate, but never before has he been the most susceptible to incoming attacks from multiple opponents.

Mr. Biden is likely to face questions about his recent comments pointing to his work in the U.S. Senate with two segregationists, which he referred to as a time of civility in the chamber, and his recent avowed support—before reversing himself—on a ban on federal funding for some abortion services. Both those episodes have provoked a backlash from his Democratic rivals.

“By no means is this going to be a cakewalk for Joe Biden. The other contenders are going to see this as an opportunity to bring him down and elevate themselves,” said Maria Cardona, a Democratic strategist and veteran of presidential campaigns.

Mr. Biden has focused his attention squarely on President Trump, warning that the Republican incumbent could damage the country beyond repair if given a second term.

A key question will be whether Mr. Biden will be able to spend most of his first debate targeting Mr. Trump or having to defend his own record amassed over more than four decades in national politics as a senator from Delaware.

“Every Democrat who was active in the ’90s has to explain positions they took that are no longer tenable,” said Jess McIntosh, a Democratic strategist. “Where Biden has a hard time is that he can’t seem to ever say he was wrong to have supported or believed something.”

Mr. Biden has been preparing in recent weeks with the help of an experienced debate team, led by Ron Klain, a longtime Biden adviser who has overseen debate prep for every Democratic presidential nominee since 2004.

Twenty Democratic candidates go head to head over two consecutive nights of televised debates at the end of the month in Florida. WSJ’s Gerald F. Seib takes a closer look at the eclectic mix of candidates. Photos: AP, Bloomberg

Mr. Biden has played down the significance of this week’s event, saying in Iowa recently, “it’s a little bit of an exaggeration to call it a debate because there’s not really much time. It’s like a lightning round.” The sprawling Democratic 2020 field is being split into two separate debates, each with 10 candidates.

Mr. Biden’s team has suggested any criticism will backfire.

An adviser to Mr. Biden said that unlike the former vice president, the other candidates are still introducing themselves and any attacks lodged by an opponent would mean the candidates are giving up time to talk about themselves.

WSJ Conference Call:
The State of the Democratic Field

On Friday, WSJ journalists will examine which candidates successfully made their case in this weeks debates, and which ones will face an uphill climb. Register here.

It remains to be seen whether Mr. Biden’s greater experience in presidential debates will give him an advantage over his opponents.

Mr. Biden frequently appeared with six or seven opponents when he participated in 11 debates in 2007 dominated by the three major contenders—Barack Obama, Hillary Clinton and John Edwards.

An underdog in the primaries, Mr. Biden often displayed a sense of humor and comedic timing, playing the aggressor and pointing to his foreign-policy experience.

In the first 2007 debate, NBC News moderator Brian Williams asked Mr. Biden if he could reassure voters that he would have the discipline he would need to be president on the world stage.

“Yes,” Mr. Biden deadpanned as the audience roared with laughter.

At Drexel University in Philadelphia in October 2007, Mr. Biden delivered a memorable line, saying of GOP presidential hopeful Rudy Giuliani, a former New York City mayor, “there’s only three things he mentions in a sentence: a noun and a verb and 9/11.”

“I don’t see a weakness. I always thought he won all of our debates on style and substance because of his experience,” said former New Mexico Gov. Bill Richardson, who also sought the Democratic nomination in 2008.

From left, Joe Biden, Barack Obama and Hillary Clinton before a Democratic primary debate in April 2007 in Orangeburg, S.C.

In a largely forgotten December 2007 debate exchange in Iowa, Mr. Biden was asked about racially insensitive comments he made in which he referred to Mr. Obama as “clean” and said one couldn’t “go to a 7-Eleven or a Dunkin’ Donuts unless you have a slight Indian accent.” In response, Mr. Biden spoke about his commitment to civil rights, and when he finished speaking, two of his 2008 rivals applauded.

At that debate, Mr. Obama quickly vouched for Mr. Biden’s character, saying he had “absolutely no doubt about what is in his heart.” Mr. Obama would choose Mr. Biden as his running mate eight months later.

But now that he leads several early polls of the 2020 Democratic field, Mr. Biden’s rivals may not be so willing to defend him this time.

Vermont Sen. Bernie Sanders, who will stand at Mr. Biden’s left, has signaled his plan to portray the primary as a defining choice for the party, warning against the dangers of pursuing a “middle ground” strategy, in apparent reference to Mr. Biden.

South Bend, Ind., Mayor Pete Buttigieg, meanwhile, will be at Mr. Biden’s right, and by his mere presence, the 37-year-old will offer a generational contrast with Mr. Biden.

Mr. Biden also could face pressure from California Sen. Kamala Harris, who is African-American and who questioned Mr. Biden’s reference to the two segregationist senators recently, or New York Sen. Kirsten Gillibrand, who has made the protection of abortion rights a key element of her campaign.

Mr. Biden’s debate experience has brought him setbacks, most notably in his first presidential campaign.

How important is the first primary debate for Joe Biden’s 2020 presidential campaign? Join the conversation below.

His 1987 bid ended a few weeks after he failed to attribute part of his closing address to British politician Neil Kinnock during a debate at the Iowa State Fairgrounds.

In 2008, against then-Alaska Gov. Sarah Palin, Mr. Biden came across as subdued and respectful, mindful of the potential pitfalls against the first woman to run on a Republican presidential ticket.

Four years later, Mr. Biden’s job was to halt any Republican momentum after Mr. Obama struggled in his first debate against Mitt Romney.

Mr. Biden largely succeeded, using an aggressive approach against then-Rep. Paul Ryan, who later became House speaker, along with a touch of humor.

“He has tremendous range,” said Dan Senor, a former adviser to Mr. Ryan who oversaw their debate prep, referring to Mr. Biden. “Biden doesn’t have one move. He can do a lot of different things.”

Write to Ken Thomas at ken.thomas@wsj.com