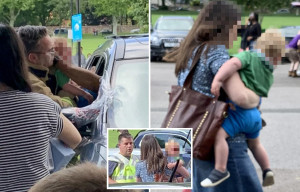 BUCKINGHAM Palace has called in a pest ­control squad to tackle a plague of rats and mice said to have left the Queen “horrified”.

Officials decided to get help with the problem after a rat was spotted tearing through the kitchens.

On Saturday night a source said: “Mice and rats are increasingly problematic in the capital, especially in very old buildings.

“Staff in the lower quarters especially have become quite used to seeing little brown mice tearing along the ­corridors.

“There isn’t a huge amount that can be done.

“But council pest control did come in to put down poison and examine the problem.

“Staff, particularly kitchen workers, were given elementary training in how to stop them spreading.

“Obviously hygiene is a ­priority, as are simple things like shutting cupboard doors and sweeping away any crumbs or bits of food.

Acid victim says ‘you f***ed up, you should’ve killed me’ as he ‘vows revenge’

Boy, 17, found dead in children’s playground in Bolton at 3am

“Rats have been spotted around the outside of the kitchen areas which clearly isn’t ideal.” The Queen’s main residence dates back to 1703.

Last year it was revealed that Britain was under threat of a super-rat invasion, with the rise of a rare breed of mutant rodent.

A spokesperson for the British Pest Control Association admitted that the long-tailed rodents had grown increasingly immune to the poison normally given to them.