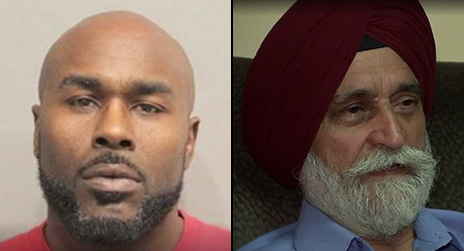 JUNE 20–An elderly Walmart greeter was punched in the face by a shopper who was trying to leave the Texas store with unpaid merchandise, police report.

According to cops, Mohindra Radhawa, 75, was working Friday night at a Walmart in Cypress, a Houston suburb, when he was assaulted by Craig Valentine, 42.

As detailed in a criminal complaint, Radhawa scanned Valentine’s purchases and determined that an 18-pack of Gatorade “showed it was not paid.” Radhawa also “checked the receipt manually and did not see any Gatorade on it.”

Valentine, cops say, told Radhawa that “everything was paid for” and “snatched the receipt” from the Walmart employee’s hand. Then, when Radhawa persisted, Valentine chest-bumped the worker and dropped him to the ground with a right hook.

The attack, which was captured by a security camera, left Radhawa, a 15-year Walmart veteran, with a bloodied lip, a bump on his head, and bent glasses.

After the confrontation, Valentine called a Walmart manager to claim that he was attacked by Radhawa. In a follow-up call to the store, Valentine reportedly apologized for assaulting Radhawa and expressed remorse.

Valentine was arraigned yesterday on a felony charge of causing injury to an elderly individual. Valentine, free on $1000 bond, listed his employer as Home Depot in a court filing. (2 pages)