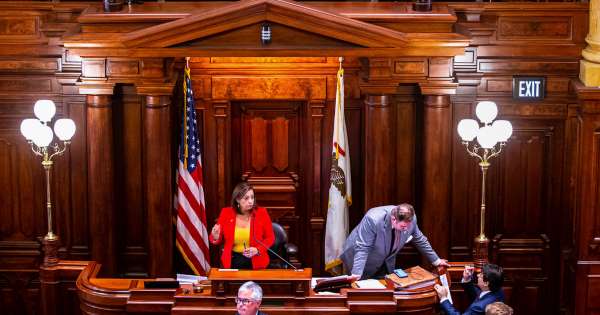 © Justin L. Fowler/The State Journal-Register, via Associated Press
Abortion rights activists sat last month in the gallery of the State Senate of Illinois, which has taken a sharp left turn.

When J.B. Pritzker took over as the governor of Illinois this year, Democratic lawmakers, who had spent four years at an impasse with his Republican predecessor, vowed that their party’s new grip on the State Capitol would bring immediate change.

The pace has been startling. In recent months, Illinois legislators have moved sharply to the left, deeming abortion a fundamental right for women no matter what the Supreme Court might decide, raising the minimum wage, taking steps to legalize recreational marijuana and introducing a graduated income tax.

Some 700 miles to the south, the Alabama State Capitol, dominated by Republicans, has raced in the opposite direction.

Alabama lawmakers voted during this term to ban most abortions. They eliminated marriage licenses, so that probate judges opposed to same-sex marriage would not have to sign marriage certificates. And they approved requiring sex offenders who commit crimes involving children to undergo chemical castration at their own expense.

Gov. Kay Ivey of Alabama, a fellow Republican, earlier signed the abortion and marriage license bills, and on Monday her office announced that she had signed the castration legislation.

[Read about what chemical castration means in Alabama.]

It is the first time in more than a century that all but one state legislature is dominated by a single party. Most legislative sessions have ended or are scheduled to end in a matter of days in capitals across the nation, and Republican-held states have rushed forward with conservative agendas as those controlled by Democrats have pushed through liberal ones.

Any hope that single-party control in the states might ease the tone of political discourse has not borne out. Lopsided party dominance has not brought resignation; instead of minority parties conceding that they lack the numbers to effectively fight back, the mood has grown more tense and vitriolic.

“The whole nation is speaking about how divisive we are,” Thomas Jackson, a Democrat in the Alabama House of Representatives, told colleagues during a contentious meeting last month.

In Oregon, where Democrats control state government, Republicans boycotted sessions for several days over disagreements about taxes and gun control. In Tennessee, where Republicans are in charge, Democrats staged a walkout during a heated and chaotic budget debate, and Republicans ordered the police to go find them.

In New York, the State Legislature passed several laws that had been blocked in previous years by Republicans, who lost control of the Senate earlier this year after a decade in power. Those measures included a law extending the period of time for victims of childhood sexual abuse to file lawsuits, and several others restricting the use of firearms, including bans on bump stocks and teachers carrying guns in schools.

And in Colorado, where Democrats dominate in the capital, Republicans were so upset about the stream of new laws being passed that they demanded each bill be read aloud to slow the pace. Democrats responded by having five computers simultaneously “read” bills. The computers were able to whip through hundreds of pages in minutes, but the result was gibberish.

© Connor Radnovich/Statesman-Journal via Associated Press
A group including three Democratic senators stood among the empty desks of Republican senators at the Oregon State Capitol in May.

Colorado Republicans promptly sued. They won in court, but Democrats went on — at a moderated pace — to pass legislation that many Republicans opposed, reducing greenhouse gas emissions, banning gay conversion therapy for minors and creating a reinsurance program to lower health care costs.

This year was always poised to be contentious in statehouses. Across the nation, nearly 1,700 new lawmakers won seats in last fall’s elections. The vast majority of the newcomers were Democrats, who won control of six new legislative chambers, meaning that they now dominate both chambers in 18 states. But Republicans continue to control the majority of state legislatures, with 29.

Analysts said that issues addressed by state legislatures this year, which included gun control, health care, education and police procedures, might have more immediate, lasting effect than anything approved in Washington, D.C., where government is divided.

The roots of the polarization in state legislatures can be traced to elections in 2010, when Republicans made decisive gains in statehouses and pressed for policies that included restricting labor unions and abortion access, while expanding gun rights, according to Sarah F. Anzia, a political scientist at the University of California, Berkeley.

Around the same time, Dr. Anzia said, national organizations representing interest groups ranging from teachers to gun owners became more active in state capitals, because they found it far easier to make headway in places like Sacramento and Charleston, W.Va., than in Washington because of gridlock in Congress.

The number of states with either supermajorities of Democrats that also have Democratic governors (California, Nevada and Oregon, among others) or Republicans with Republican governors (Alabama, Ohio and Tennessee, among others) has grown, too, meaning that many lawmakers rarely feel the need to compromise.

“If you are a Republican in one state, you are probably going to be pushing the same agenda as a Republican in another state, and the same is true for Democrats,” said Dr. Anzia. “That hasn’t always been true, and the result is that now more than ever, state legislatures are key players in these partisan battles over politics.”

In Minnesota, the only state left with a divided legislature, promises of bipartisanship sometimes devolved into stalemate.

During a budget standoff last month, Tim Walz, the Democratic governor who campaigned last year on a pledge to work across the aisle, angrily denounced Republicans for blocking gun control efforts and supporting deep tax cuts, saying those policies “fit better in Mississippi and Alabama than they do in Minnesota.”

Ultimately, Democrats could win neither new gun laws nor new tax increases, and Republicans also failed to win approval for the bulk of their agenda.

Still, once the session ended last month, Governor Walz said that “Minnesota is showing the rest of the nation that Republicans and Democrats can still find compromise and work together to get things done,” citing spending increases for public education and efforts to fight opioid addiction.

Alabama and Illinois — one overwhelmingly red, the other blue — were more representative of this year’s tone, providing perhaps the best examples of political parties moving to enact utterly different agendas.

After Alabama effectively banned abortion last month, female lawmakers in Illinois responded almost immediately, pressing through a bill expanding abortion rights in their state. (Abortion rights groups have sued to stop the Alabama law from taking effect.) And while Illinois voted to allow sports betting and to legalize recreational marijuana, Alabama failed to approve either a state lottery or medical marijuana.

It was Alabama’s abortion measure, the strictest in the nation, that sparked the most contentious debate of any legislation this session.

During debates in the Legislature, Rolanda Hollis, a Democratic member of the House of Representatives, read a poem to colleagues called “If My Vagina Was a Gun” that she said illustrated Alabama’s consistent protection of Second Amendment rights but not abortion rights.

Bobby Singleton, a Senate Democrat, told his Republican colleagues that they had “aborted” and “raped” Alabama by supporting the legislation, which was approved generally along party lines.

Terry Lathan, the chair of the Alabama Republican Party, downplayed the uproar over the abortion bill, saying she had seen worse — including when a Republican senator punched a Democratic colleague on the Senate floor in 2007.

“This is the political arena,” she said. “Everyone needs to put on their big girl and boy pants. I mean, come on!”

In Illinois, Republicans were in much the same position as Democrats in Alabama: Outnumbered and outflanked. And like Alabama Democrats, Illinois Republicans lost nearly every vote of significance.

In addition to voting to raise the minimum wage to $15 by 2025, the state legislature became the first in the nation to pass a bill legalizing both the sale and possession of marijuana. (In other states, voters have approved such laws through ballot initiatives.)

Dale Righter, a Republican in the Illinois Senate, said that without power, Republicans’ hopes relied on conservative Democratic voters deciding that their lawmakers had gone too far.

“I have no doubt that there are Democratic voters saying, ‘Hey, this isn’t what I signed up for,’” he said.