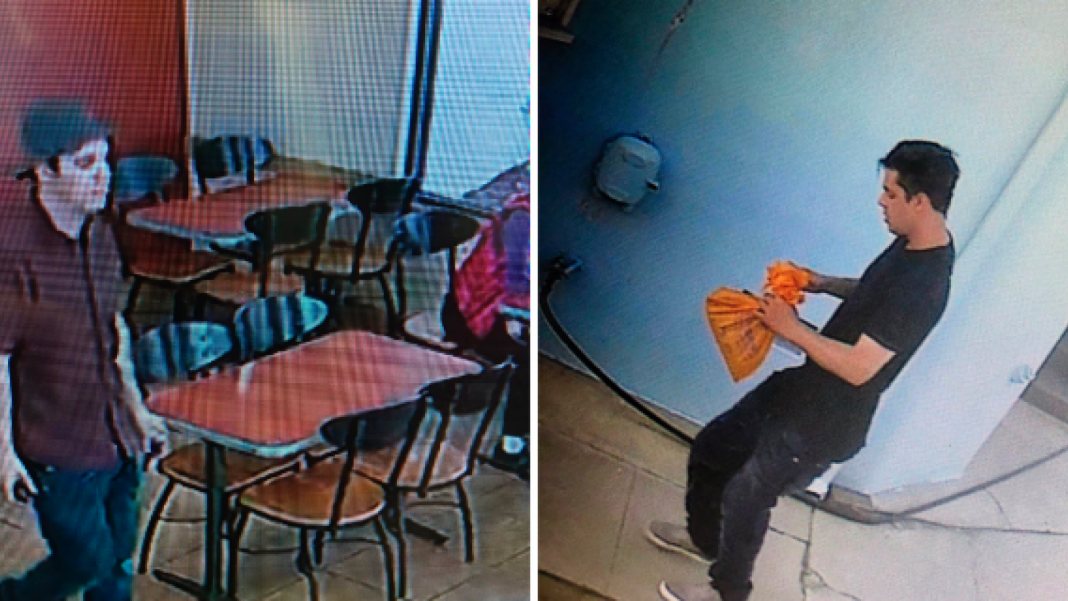 This combination of Monday, June 10, 2019 photos taken by a surveillance camera and provided by the Los Angeles County Sheriff’s Department’s Homicide Bureau shows a suspect the authorities are seeking the publics help in identifying in the shooting of a sheriff’s deputy that left the officer critically wounded at a fast-food restaurant in Alhambra, Calif. The off-duty deputy was shot on Monday as he waited in line at the restaurant. The photo at right shows the suspect after he changed his clothes in a nearby neighborhood. (Los Angeles County Sheriff’s Department’s Homicide Bureau via AP)

ALHAMBRA, Calif. – The Latest on the shooting of a Los Angeles County sheriff’s deputy (all times local):

Authorities have arrested a Utah man on suspicion of shooting an off-duty Los Angeles County sheriff’s deputy and they say he may have killed another man an hour earlier.

Long Beach police arrested 30-year-old Rhett Nelson of St. George, Utah, on Tuesday and turned him over to sheriff’s investigators.

Authorities believe he’s the man who walked up and shot Deputy Joseph Gilbert Solano in the head on Monday as he stood at the counter of a Jack in the Box in suburban Alhambra.

Sheriff Alex Villanueva says Solano is in grave condition and on life support.

Authorities say Solano wasn’t in uniform and the attack appears to be random and unprovoked.

Los Angeles police are trying to determine whether Nelson also drove up and killed another man in that city less than an hour earlier in another apparently random shooting.

Investigators are asking for the public’s help in identifying a man suspected of shooting of an off-duty deputy who was critically wounded at a fast food restaurant.

The Los Angeles County Sheriff’s Department released photos from surveillance video showing the young man around the time of the shooting Monday in suburban Alhambra. Another photo shows him after he changed his clothes in a nearby neighborhood.

Investigators say the deputy was waiting for a food order at a Jack in the Box when the man shot him in the head with a handgun, then drove away in a Kia Sorento SUV.

The deputy was in civilian clothes and had nothing to outwardly indicate he was a law enforcement officer.

His name was not immediately released.