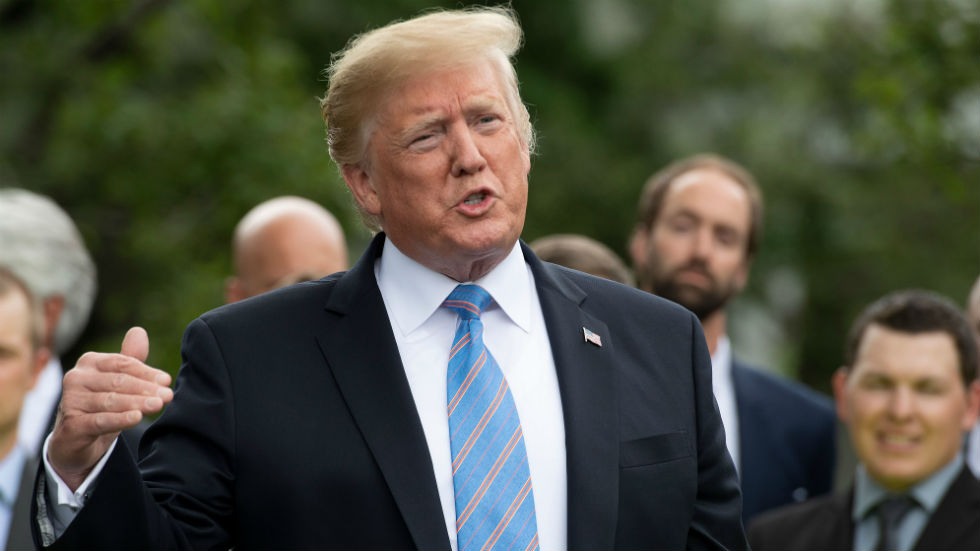 The 229-191 vote broke down strictly along partisan lines with no defectors from either party, highlighting the entrenched divisions on Capitol Hill between Democrats accusing Trump of conducting a “cover-up” related to Mueller’s findings, and Republicans fighting to protect their White House ally from what they consider a political “witch hunt” heading into 2020.

The resolution empowers the House Judiciary Committee to go before a federal court in seeking the Department of Justice’s (DOJ) compliance with subpoenas for disputed materials and witness testimony. Two figures are named explicitly in the text: Attorney General William Barr

But in a late-debate twist, Judiciary Chairman Jerrold Nadler

The surprise 11th-hour agreement has tempered some of the long-running tensions between Democrats and the administration. And leading up to the vote on Tuesday, Democratic leaders simultaneously hailed the resolution as a necessary and aggressive expansion of their constitutional oversight powers, while also suggesting they might not ever need to use it.

“The timeline will, in part, depend on whether the DOJ continues to cooperate with our legitimate Article I powers of oversight and investigation,” said Rep. Hakeem Jeffries

“If they continue to cooperate with us, I would expect that we will not race to the courthouse.”

That appeasement does not extend, however, to McGahn. And Democrats are suggesting they’ll use the new legal powers provided by Tuesday’s resolution to go after the former White House counsel in the not too distant future.

“Seems to me that Mr. McGahn is in a particularly vulnerable situation as a private citizen,” Jeffries said. “He should either begin to cooperate immediately, or face the consequences.”

“There is nothing as divisive in our country, in my view, than impeachment,” Pelosi said Tuesday during an event in Washington, delivering a familiar refrain.

At least 56 rank-and-file lawmakers are backing impeachment, according to a tally kept by The Hill, and Pelosi is under growing pressure to show that her preferred strategy of aggressive investigations is getting results.

The language adopted by Democrats in describing Tuesday’s resolution hints at the eagerness of top Democrats to project an image of going tough on the scandal-plagued administration, even as they’re opting against even sterner legal measures at their disposal.

Indeed, Democratic leaders are labeling the resolution one of “civil contempt.” But the measure makes no mention of contempt. And the language is much softer than another resolution, passed through the Judiciary panel last month, to hold Barr and McGahn in criminal contempt of Congress — a step that carries steep penalties, including heavy fines and up to a year in prison.

“We’re calling it contempt, for short, because the courts obviously would have to find the executive branch in contempt in order to, sort of, render the orders to comply,” said Rep. Jamie Raskin

“So it’s, generally speaking, not contempt.”

There is some disagreement among the Democrats as to why they didn’t pursue the criminal contempt resolution. Jeffries and Nadler both cited the DOJ’s recent decision to share more Mueller files as the reason they softened their position.

“We began to see yesterday, in the face of the possibility of either a criminal contempt citation, or proceeding with inherent contempt, that they began to see things differently all of a sudden,” Jeffries said.

“I understand contempt is not in the resolution — it’s essentially civil contempt —and … it authorizes the committee to go to … have the courts enforce the subpoena,” Hoyer said Tuesday. “We think that’s a much more productive route than pretending that a U.S. attorney appointed by Donald Trump is going to pursue the attorney general — his boss — for contempt.”

Separately, Democrats are still negotiating for the testimony of Mueller, who had indicated last month that he’d prefer not to appear before Congress to discuss his findings. Nadler has taken the lead on those talks, but has declined to give updates on their status.

The drawn-out timeline has frustrated a growing number of lawmakers, who want the special counsel to clarify a host of questions still lingering around his report, particularly his reason for not recommending obstruction charges against the president.

“That is the view of the overwhelming majority of the House Democratic Caucus,” Jeffries said. “Bob Mueller has a duty to the American people to bring those conclusions to light in public testimony before the United States Congress.”