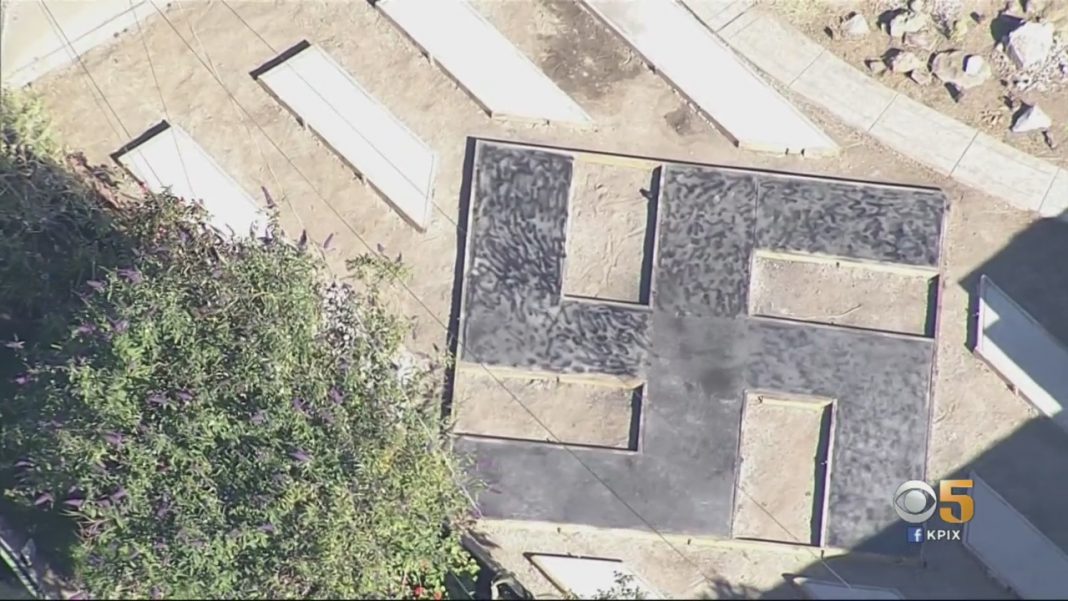 EL SOBRANTE (KPIX 5) — A community in Contra Costa County is on edge after a man displayed a giant cement swastika on his front yard.

The homeowner, Steve Johnson of El Sobrante, said the constructed sign isn’t a swastika, but a Tibetan symbol. Neighbors aren’t buying it–they said Johnson has other displays of swastikas around his home and on his motorcycle.

“You can call it what you want, as far as I’m concerned,” Johnson said when asked what the symbol was. “It’s a Tibetan sign that was invented way before swastikas was invented.”

“It represents me not having to pull weeds out of that part of my yard.”

Vince Poehnelt has lived on the same block since 1967. As a man of German descent, he said Johnson’s display offended him greatly.

Neighbor Maria Gutierrez was concerned about what the symbol could mean for children and families in the area. “Now, it’s now safe,” she said.

Others are worried about their property values dropping as a result of the display.

“I tell them, ‘Hey, I’ve been helping you out.’ Tell them I love them,” Johnson said when asked about what he’d say to the neighbors who were offended. He went on to ask, likely sarcastically, “What is a swastika?”

“I don’t think he’s a hardcore Neo-Nazi. He may be racist,” Poehnelt said.

“I own this house and I’ll put what the hell I want on my front yard and it’s none of you guys’ business, so get the hell off my property!” Johnson told members of the media.

When asked if he was Tibetan, Johnson said, “I could be.”

Woman in labor makes her husband stop at elections office so she can vote first: reports

Woman in labor makes her husband stop at elections office so...

Trooper on Cuomo’s detail dates his daughter, gets transferred close to...