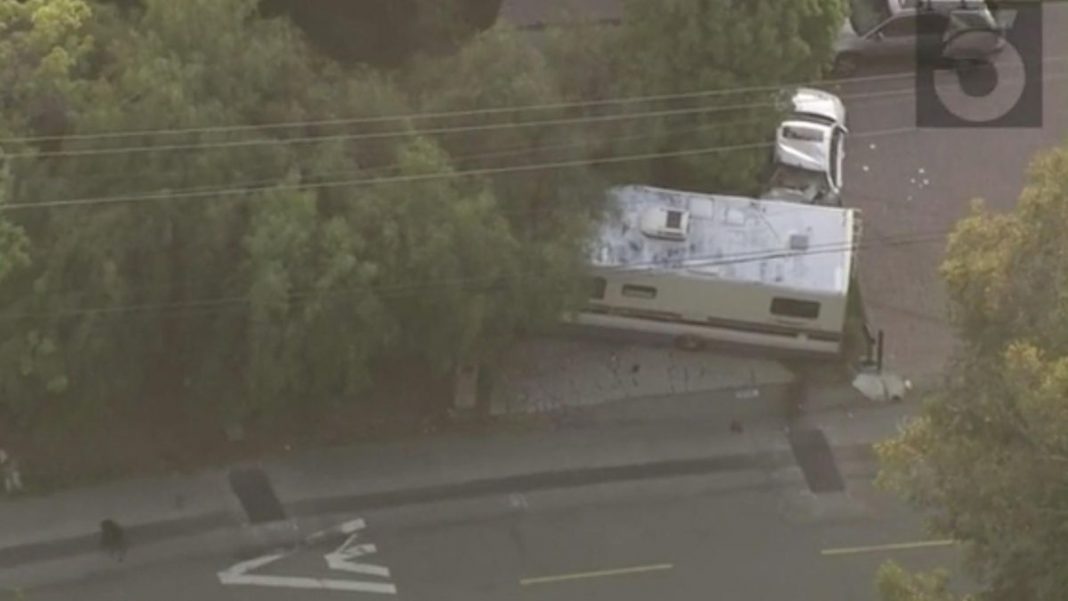 LOS ANGELES — A woman in a stolen recreational vehicle took off on a wild pursuit Tuesday evening with two dogs in tow, smashing into a palm tree and several cars as parts of the camper came flying off.

Three people, including the driver, were taken to a hospital with minor injuries.

The pursuit began at 7:05 p.m. near Towsley Canyon in Santa Clarita. Los Angeles County sheriff’s deputies had been conducting patrol checks there since a man was seen exposing himself to a woman while she was practicing yoga, said sheriff’s Deputy Tracy Koerner.

Koerner said deputies learned the RV had been stolen out of Simi Valley. KABC-TV Channel 7 reported that the pursuit began after the RV failed to yield.

Two dogs were seen with the woman in the RV as she attempted to elude authorities. At times, the dogs were on her lap as she drove. At one point, one of the dogs jumped from the vehicle.

Video of the pursuit showed the RV hitting speeds of up to 60 mph, and as the driver made her way through the San Fernando Valley, the vehicle slammed into a black car coming through an intersection. TV helicopters zoomed in and showed the driver holding a dog by its harness as the animal attempted to jump from the vehicle.

At least six other vehicles were reportedly struck during the pursuit, which included a detour through a parking lot. As the driver made a wide left turn from the lot, the RV smashed into a palm tree. The impact sheared off part of the side of the RV and took out the front windshield.

The vehicle, with debris flying from it, finally stopped after rear-ending a car in Tarzana. The driver then made a run for it and attempted to scale a fence. She was tackled, handcuffed and eventually taken away by ambulance in a gurney.

Two other people hurt in the crash were taken to a hospital with minor injuries, the California Highway Patrol said.

Both dogs, which suffered non-life-threatening injuries, were taken in by animal control, authorities on the scene are reported as saying.

The suspect was identified as Julie Ann Rainbird, 52, of Winnetka. She was booked on suspicion of offenses including "evading a police officer causing injury or death," and was held in lieu of $100,000 bail, the California Highway Patrol reported.