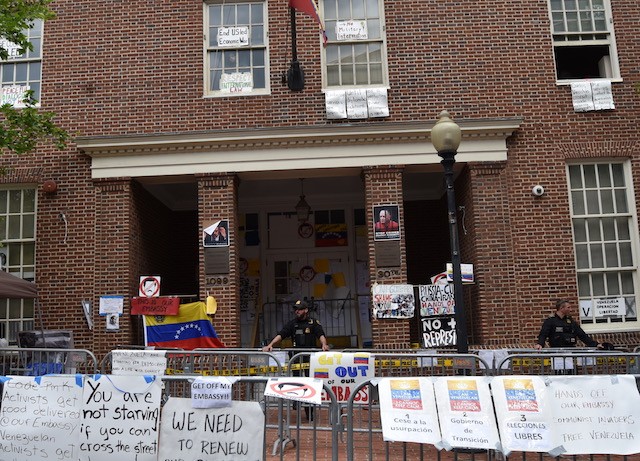 WASHINGTON, DC — The Venezuelan Embassy on the banks of the C&O Canal in Washington, DC, has been in the spotlight as efforts to push out dictator Nicolás Maduro continue, and supporters and detractors camp inside and outside the diplomatic post.

In the wake of the unrest in Venezuela, where President Juan Guaidó — the legitimate leader, according to the country’s Constitution — has been trying to gain the support of the military, diplomats fled the D.C. embassy, taking their hard drives with them. The phone number has been disconnected.

While Guaidó has been the legal president of Venezuela since January, Maduro has maintained control of the military and refused to leave the presidential palace, Miraflores.

The leftist group Code Pink has similarly refused to vacate the D.C. embassy since camping out there, claiming Maduro loyalists invited them to stay to protest what they claim is a military coup — aided and abetted by the United States — to overthrow Maduro.

In recent days, ordinary Venezuelans and Venezuelan-Americans have shown up on the sidewalks surrounding the embassy to show their support for Guaidó and against people they call “communists” who support a man who has driven the country into economic ruin and caused endless suffering for citizens. The posters they carry and have hung on a barrier in front of the embassy show where they stand on the protest and Venezuela’s future — Code Pink “supports the killing and starvation of the Venezuelan people under the Maduro regime” and “Hands Off My Embassy Communist Code Pink.”

Robert Nasser was born in Caracas and has lived in the United States for 20 years. He told Breitbart News that he came to show his support for Guaidó and a democratic election in his homeland.

Nasser said Code Pink’s claim that they were invited to stay in the embassy could not be accurate since, under the Venezuelan Constitution, Maduro has not been the president since January 23 and therefore has no authority over the nation’s embassies. It would have been up to the new Venezuelan ambassador to the U.S., Carlos Vecchio, to make such an invitation.

Breitbart News asked Nasser what he hoped the outcome would be at the embassy.

“It’s not so much what I hope, it’s what I know is going to happen,” Nasser said. “And what’s going to happen is these people who are illegally occupying our embassy, they’re going to leave very, very soon.”

“We are hoping for a peaceful resolution,” Nasser said. “We are non-violent. We don’t wish violence on anybody. Even those that think differently from us.”

“It’s within their power,” Nasser said. “They can leave anytime they want. No one is blocking their access.” 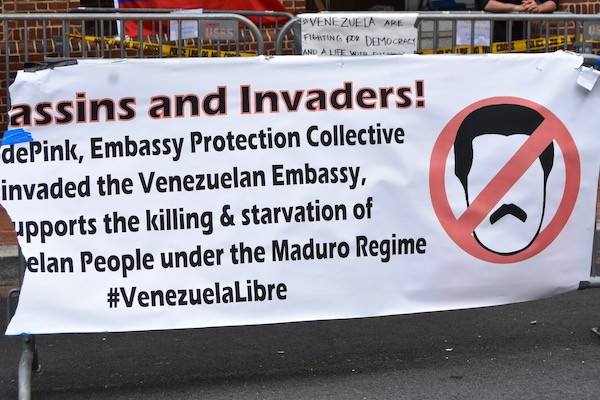 CNN reported that the U.S. State Department said any unauthorized individuals on the property are considered trespassers.

“The Venezuelan government, led by Interim President Juan Guaidó, has legal authority over the Venezuelan Embassy in Washington, D.C.,” the State Department said in a statement.

“We encourage the remaining unauthorized individuals to vacate the building and to conduct any future protest peacefully and through legal means,” the statement said.

As Maduro hangs on to power in Venezuela, Breitbart News reported:

An overwhelming majority of Venezuelans would support a foreign military intervention to oust socialist dictator Nicolás Maduro and believe that the rogue regimes in Russia and Cuba have colonized their country, the national polling firm Meganálisis found in a survey published Monday.

Asked if the federal legislature, the National Assembly, should authorize foreign military missions in the country, 89.5 percent of Venezuelans said yes. Another 91.2 percent said they did not believe it was possible for Venezuelans to remove Maduro without foreign military intervention. About 88 percent said they did not trust the nation’s armed forces. 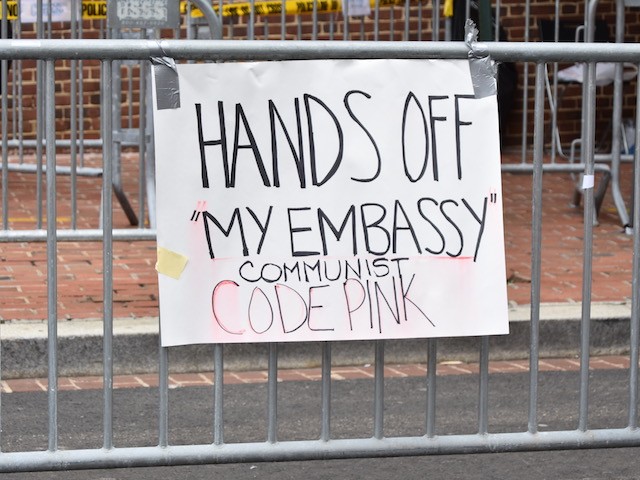