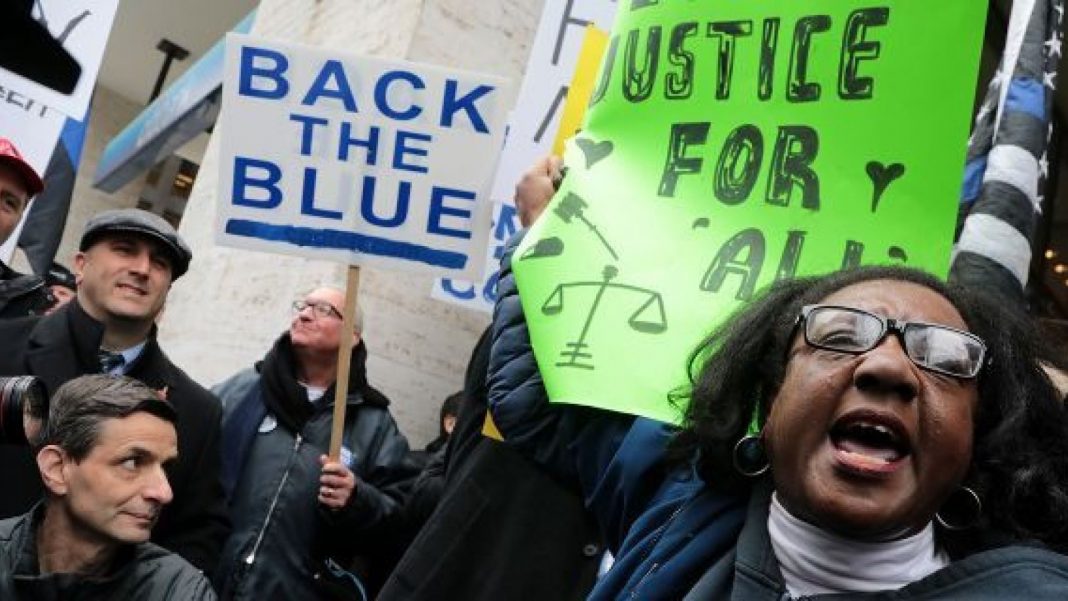 Protesters holding signs accusing the Fraternal Order of Police of being racist gathered Monday in Chicago’s Union Park to not only slam the city’s police union but also demand criminal justice reform.

“We are here to call out the hypocrisy of FOP and declare that they are a racist organization and they must be shut down,” the Rev. Kwame Pitts, of Augustana Lutheran Church, said.

The Chicago Tribune reported protesters held signs with messages like “No one is safe under #Racist FOP’s policies” and “When will you denounce white nationalists?”

Organizers and activists from The People’sLobby, Reclaim Chicago and SOUL also called for increased accountability from the police union.

Some of the speakers pushed for the creation of an elected civilian agency that has the power to hire and fire the city’s top cops and investigate police misconduct.

Anthony Clark, a history teacher at Oak Park and River Forest High School, was suspended earlier this year after allegedly helping students stage a walkout on the anniversary of the death of Trayvon Martin, a 17-year-old fatally shot by neighborhood watch captain George Zimmerman in a controversial 2012 incident. Clark didn’t mince words.

“This is an institution built upon white supremacy. Built upon it,” the Chicago Sun-Times reported Clark as saying. “And they say police officers and police departments are supposed to serve and protect, but who the f— are they protecting? The system.”

Others at the rally could be heard chanting “16 shots and a cover-up,” referring to Laquan McDonald, a black teenager who was shot by white police officer Jason Van Dyke. Van Dyke was convicted in October of second-degree murder and sentenced to about seven years in prison.  A grainy dashcam video of him shooting McDonald 16 times in less than 30 seconds stoked outrage, polarized Chicago and garnered national attention over how best to police minority communities.

About 10 officers guarded the doors of the FOP lodge during the protest. After the speeches, most demonstrators made their way back to Union Park. About a dozen others, though, continued to block traffic and were arrested after multiple warnings to get off the street.

One of the protests on April 1 was led by the Fraternal Order of Police. Activists stood outside of Foxx’s office and chanted “Foxx much go!” and “lock her up!” while demanding her resignation.

The Rev. Jesse Jackson, clergy, elected officials and community activists held their own rally at the Chicago Temple in support of Foxx.

A ‘Black Mirror’-Style Robot Dog Was Spotted in the Wild and...

Area 51 Has A Huge New Hangar Facility That Points To...