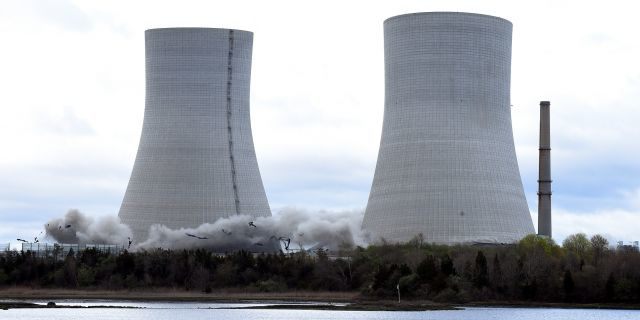 Two 500-foot cooling towers of a Massachusetts power plant came crumbling down within seconds Saturday morning during a controlled demolition that drew crowds of spectators who celebrated the concrete structures being destroyed.

The cooling towers of the former Brayton Point Station, the last coal-fired power plant in Massachusetts, was reduced to rubble in about 10 seconds when the controlled demolition started at 8 a.m. Saturday. Video showed a cloud of dust billowing into the air after the towers hit the ground.

The structures were believed to be the largest cooling plants to be destroyed in a controlled demolition.

“I wasn’t paying close enough attention to the time and missed the first few seconds,” Ross McLendon, a Rhode Island resident, told Herald News of Hall River. “We came because it seemed like something fun for the kids to do. They had never seen an implosion.”

The two 500-foot cooling towers of the former Brayton Point Station begin to collapse after explosive charge goes off in Somerset, Mass.
(AP)

The power plant had been operating since 1963, but the cooling towers, which cost an estimated $600 million to build, were added on in 2009. The plant closed in 2017 and the towers were up for less than 10 years before they were demolished in seconds on Saturday.

Several residents in Rhode Island and Massachusetts said they were happy to see the towers go down.

“I’m kind of glad they’re gone because it was just a big eyesore in this town,” resident Gary DeCosta told NBC10.

The new owners of the property, Commercial Development Co., plan to turn the site into a multi-use facility mainly dedicated to supporting off-shore wind farms.