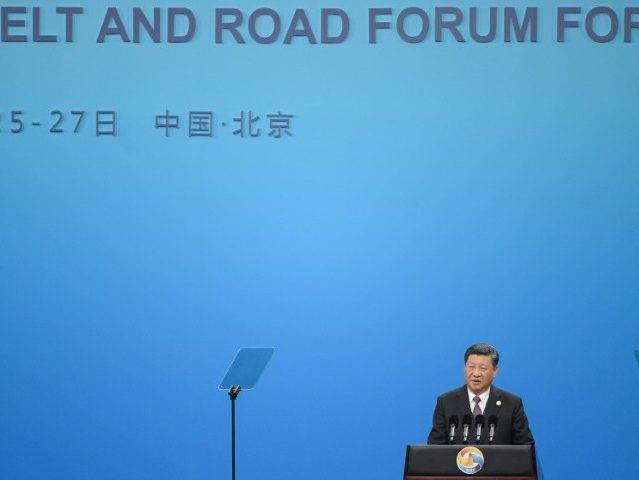 Chinese media labeled his speech a triumphant exultation of an astounding international trade and infrastructure project, while foreign reporters heard a series of signals to nervous participants and prospects that the Belt and Road Initiative (BRI) will become more transparent, financially sustainable, and politically neutral in the years ahead.

China’s state-run Xinhua news service described Xi’s speech as a celebration of the “win-win” philosophy behind Belt and Road, whose goals are “high-standard, livelihood-improving and sustainable development” for all.

Xi promised that China will increase imports of goods and services, lower its tariff rates, and further open the Chinese economy to foreign businesses, which all sound like at least rhetorical concessions to the Trump administration in the China-U.S. trade war. It remains to be seen what China actually does concede during the final round of negotiations, but Xi at least admitted China’s existing policies are problematic.

The BBC noticed Xi’s attention to “key U.S. trade concerns ahead of talks between the two countries next week,” and thought some of his other remarks were defensive responses to criticism of Belt and Road, particularly complaints that its projects are often financially unsustainable, administratively opaque, and prone to corruption:

[Xi] said the programme was about jointly “delivering win-win outcomes and common development.”

“Everything should be done in a transparent way and we should have zero tolerance for corruption,” he said.

“We also need to ensure the commercial and fiscal sustainability of all projects so that they will achieve the intended goals as planned.”

[…] In his speech, Mr Xi said China would boost efforts to secure intellectual property protection, increase imports of goods and services and ensure a fair trading environment for firms, while also stressing the need for equitable treatment.

“We will overhaul and abolish unjustified regulations, subsidies and practices that impede fair competition and distort the market,” Mr Xi said.

“We hope that other countries will also create an enabling environment of investment, treat Chinese enterprises, students and scholars as equals, and provide a fair and friendly environment for them to engage in normal international exchanges and cooperation.”

CNBC noticed Xi was big on reform ideas but short on details, singing the praises of “globalization” without explaining how Communist China can separate its political agenda from its economic policies.

“A globalized economy calls for global governance. China will strengthen macro policy coordination with major economies to generate a positive spillover,” Xi said in a characteristically grandiose but insubstantial passage.

Grand rhetoric combined with vague policy has actually been working pretty well for Belt and Road so far, as CNBC quoted Center for Strategic and International Studies Senior Vice President Matthew P. Goodman tallying up 125 nations signed up for the program but adding that “participation is no guarantee of benefits, which have ranged greatly.”

Goodman noted that China has not established firm criteria for BRI projects, making it easy for “interest groups within and outside China to repackage their own efforts as supporting the initiative.”

Xi seemed especially eager to promise the initiative would reduce corruption and fraud in the future, without clearly admitting how widespread corruption currently is. He was also highly defensive against criticism that Belt and Road projects tend to be “debt traps” – deliberately unsustainable projects that appeal to the selfish and corrupt elite of partner countries but cannot generate enough revenue to sustain themselves over the long term, leaving those countries with gigantic debts to China that can only be serviced by compromising their sovereignty.

“Everything should be done in a transparent way and we should have zero tolerance for corruption. Building high-quality, sustainable, risk-resistant, reasonably priced, and inclusive infrastructure will help countries to fully utilize their resource endowments,” he said.

One of the problems facing BRI critics is that political elites in partner countries do not want to admit they fell into Chinese debt traps. It is extremely dangerous for them to admit they signed on to projects that cannot possibly generate enough revenue to repay the loans they took from China. Vague reassurance from Xi is all they need to hear right now in order to stay on board, fingers crossed that the debt traps will not snap shut until they are safely out of office, and breaking away from BRI becomes impossible for their successors.

Xi likewise seemed confident he could deflect environmental concerns about BRI projects by merely promising to do better in the future, a gambit likely to work because the loudest environmentalist groups are anti-capitalist, anti-Western, and most of all anti-American in their outlook. A little climate change lip service is all the Greens really need from Beijing, even when the city is difficult to see through its rolling clouds of smog and China is gleefully dotting the New Silk Road trade route with carbon-spewing coal-fired electric plants.

In a similar vein, Xi has demonstrated he can classify Islam as a national security threat and take steps to completely erase it from a large Chinese province without a peep of protest from 90 percent of the Muslim world – or international organizations that incessantly condemn Israel on behalf of the Palestinian cause.

Those nations and organizations care about Belt and Road money far more than they care about the oppression of a predominantly Muslim ethnic minority by a non-Western power. The Uighurs of Xinjiang province are quite literally being plowed over to make way for Belt and Road, as if the entire people were a dilapidated neighborhood that must be demolished to build a freeway on-ramp.

The South China Morning Post found foreign diplomats at the Belt and Road Forum were generally encouraged by Xi’s rhetoric but skeptical about China’s actions. Many of them will swallow their skepticism to get their hands on billions of dollars of BRI funding, but a few pointed out that Xi’s speech contained a number of unfulfilled promises for transparency, market access, and environmental sensitivity he has made before.

Xi did not seem interested in addressing growing criticism that Chinese workers are ruthlessly exploited by BRI, sent into partner countries as economic shock troops to provide cheap labor so local firms are frozen out of jobs.

Chinese employees of BRI projects are reportedly required to sign highly restrictive contracts and post huge security deposits that will be confiscated if they refuse to comply with the heavy demands placed upon them. Critics have compared these employment contracts to outright slavery and claim the workers are often paid even less than they were promised, physically abused if they complain, and even killed by the demands placed on them.