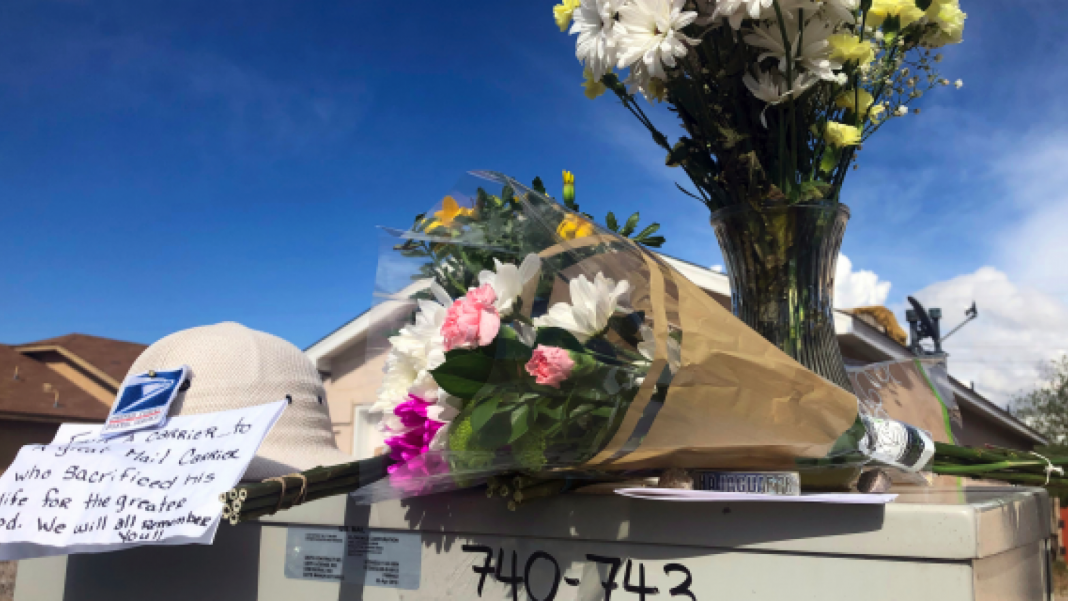 Flowers and notes are arranged atop a mailbox on Tuesday, April 23, 2019, in tribute to a mail carrier who police say was killed outside an adjacent home in Albuquerque, N.M. Police said in a criminal complaint that the mail carrier was fatally shot Monday, April 22, while trying to intervene in a dispute between a mother and her 17-year-old son, who has been identified as the shooting suspect. (AP Photo/Mary Hudetz)

ALBUQUERQUE, N.M. – Authorities have arrested a New Mexico teenager on charges he fatally shot a mail carrier after the man tried to intervene in an argument between the teen and his mother.

Xavier Zamora, 17, was taken into custody by police and the U.S. Postal Inspection Service without incident late Wednesday, Albuquerque police spokesman Gilbert Gallegos said. He said the FBI also was involved in the investigation.

Online court records did not list a defense attorney for Zamora.

The teen is charged with murder in a criminal complaint filed by Albuquerque police, although local prosecutors said they expect that the case will be referred to the U.S. Attorney’s office because the victim was a federal employee.

Police said the teen shot 47-year-old Jose Hernandez in the stomach on Monday outside his mother’s home. She told police that her son became aggressive with Hernandez after he tried to help diffuse a domestic dispute outside her house, prompting the mail carrier to use pepper spray on the teen, according to the criminal complaint.

The teen went into the house after the encounter then returned a short time later, shot Hernandez and ran back into the house, the mother said. SWAT officers secured the neighborhood before determining the suspect had escaped.

Hernandez, an Army veteran, had worked for the U.S. Postal Service in Albuquerque for 12 years, authorities said.

Since the shooting, residents have placed flowers atop a mailbox near where Hernandez was killed. Handwritten notes thanked Hernandez for his service and said he would not be forgotten.