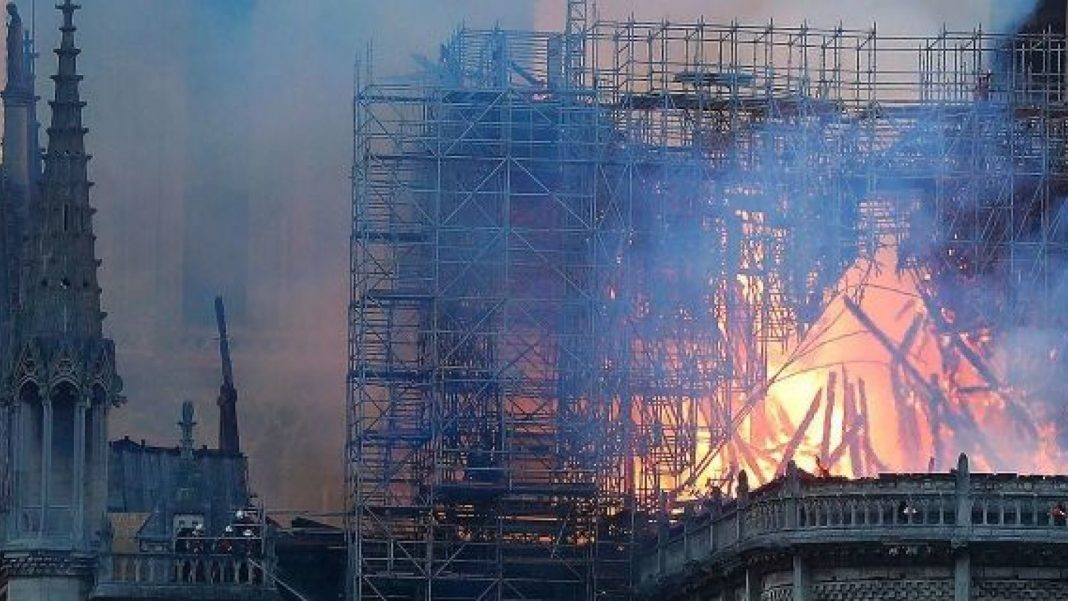 ‘WE WILL REBUILD’: The world is united in grief over the fire that destroyed much of Paris’ Notre Dame Cathedral Monday as French President Emmanuel Macron vows the historical cathedral will be rebuilt …  Investigators are treating the fire as an accident for now, the local prosecutor’s office said. Paris police will investigate the disaster as “involuntary destruction caused by fire” and have ruled out arson and potential terror-related motives for starting the blaze, officials said.

Officials were optimistic that the cathedral’s world-famous bell towers had been saved , and that the main structure of the building remained intact. Fire chief Jean-Claude Gallet confirmed that firefighters had managed to stop the fire spreading to the northern belfry, the stomping ground of the fictional hunchback Quasimodo in Victor Hugo’s 1831 novel “The Hunchback of Notre Dame.” However, the blaze collapsed the cathedral’s spire, which had been shrouded in scaffolding as part of a 6 million-euro ($6.8 million) renovation project. Macron announced the launch of an international fundraising drive to begin raising the millions of dollars necessary to restore the Notre Dame Cathedral to its former glory.

SANDERS UNAPOLOGETIC IN COMBATIVE FOX NEWS TOWN HALL: Sparks flew almost immediately at Fox News’ town hall with  Bernie  Sanders as the 2020 presidential candidate refused to explain why he would not voluntarily pay the massive new 52-percent “wealth tax” that he advocated imposing on the nation’s richest individuals — even though his tax records show that he is a millionaire …  Just minutes before the town hall began, Sanders released 10`years of his tax returns. Sanders later admitted outright that “you’re going to pay more in taxes” if he became president.

According to the returns, Sanders and his wife paid a 26 percent effective tax rate on $561,293 in income, and made more than $1 million in both 2016 and 2017. Sanders donated $10,600 to charity in 2016 and $36,300 in 2017, the records showed, followed by nearly $19,000 in 2018. But pressed by anchors Bret Baier and Martha MacCallum as to why he was holding onto his wealth, Sanders laughed and asked the anchors to pressure Trump on his taxes and challenged the president to make his tax records public.

MUELLER TIME THIS THURSDAY: The buzz in Washington, D.C. is at a fever pitch as Special Counsel Robert Mueller’s much-anticipated Russia report is set to be released to the public and Congress on Thursday morning, the Justice Department has announced … Justice Department spokeswoman Kerri Kupec told Fox News on Monday the report would be made available — with redactions — Thursday morning to lawmakers and to the public. The news comes despite mounting calls from Democrats to first release the report to Congress without redactions.

AOC’S NOT FOND OF NETANYAHU: Rep. Alexandra Ocasio-Cortez raised eyebrows during an interview Sunday when she said the possibility of cutting military or economic aid to Israel is “on the table” after the election of Prime Minister Benjamin Netanyahu … Ocasio-Cortez was on Yahoo News’ “Skullduggery” podcast when she said Netanyahu’s election comes during a disturbing trend of “authoritarianism across the world” and called the leader a “Trump-like figure.”

Micah Herndon, of Tallmadge, Ohio, crawls to the finish line in the 123rd Boston Marathon on Monday, April 15, 2019, in Boston. (AP Photo/Charles Krupa)

BOSTON STRONG: A Marine who ran the Boston Marathon in honor of three men he served alongside crawled across the finish line on Monday as his body almost gave up — but his mind didn’t. … Micah Herndon, 31, ran the race in 3 hours and 38 minutes, according to race results. But to hit that mark, he had to physically drag his body along the pavement to finish the race. Herndon, of Ohio, served several deployments in Iraq and Afghanistan, the Record-Courier reported. During a tour in Afghanistan in 2010, three people he was with were killed when they were targeted by an IED.

SANDERS NOT SHARING THE WEALTH- “Pfft, come on. I paid the taxes that I owe. Why don’t you get Donald Trump up here and ask him how much he pays in taxes?”– Sen. Bernie Sanders 2020 presidential candidate, during his Fox News Town Hall, addressing his own personal wealth and his support of a “wealth tax.” (Click the image above to watch the full video.)

TODAY’S MUST-READS
Pelosi appears to take new jab at Ocasio-Cortez.
‘Mary Tyler Moore Show’ star Georgia Engel dies at 70.
Dr. Marc Siegel: The new killer fungus and what we can do about it.

MINDING YOUR BUSINESS
Bernie Sanders slams Amazon, Netflix over failure to pay taxes.
AOC refuses to meet with banks’ top brass.
Millennials lie the most on resumes – here are the most common fibs.

The Fox News Rundown podcast: “Building the Wall” – As the battle over border security rages on, one company is presenting its plans for the border wall between the United States and Mexico. Tommy Fisher, CEO and president of Fisher Sand and Gravel, discusses the company’s proposal stands apart. Dough Schoen former adviser to President Clinton and Fox News contributor, talks abbot the unlikely rise of Pete Buttigieg, mayor of South Bend, Ind., among 2020 Democratic presidential candidate. Plus, commentary by Howard Kurtz, host of “Media Buzz.”

The Todd Starnes Show, Noon, ET:  Todd speaks with Pro Football Hall of Famer Tony Dungy and his wife Lauren about the special bond between adopted children and the parents who chose them and Texas Values President Jonathan Saenz explains why he’s organizing a rally to bring Chick-Fil-A to the San Antonio Airport.

#TheFlashback
2007: In one of America’s worst school attacks, a college senior kills 32 people on the campus of Virginia Tech before taking his own life.
1963: Martin Luther King Jr. writes his “Letter from Birmingham Jail” in which he responds to a group of local clergymen who had criticized him for leading street protests; King defends his tactics, writing, “Injustice anywhere is a threat to justice everywhere.”
1889: Comedian and movie director Charles Chaplin is born in London.

Fox News First is compiled by Fox News’ Bryan Robinson. Thank you for joining us! Have a good day! We’ll see you in your inbox first thing Wednesday morning.