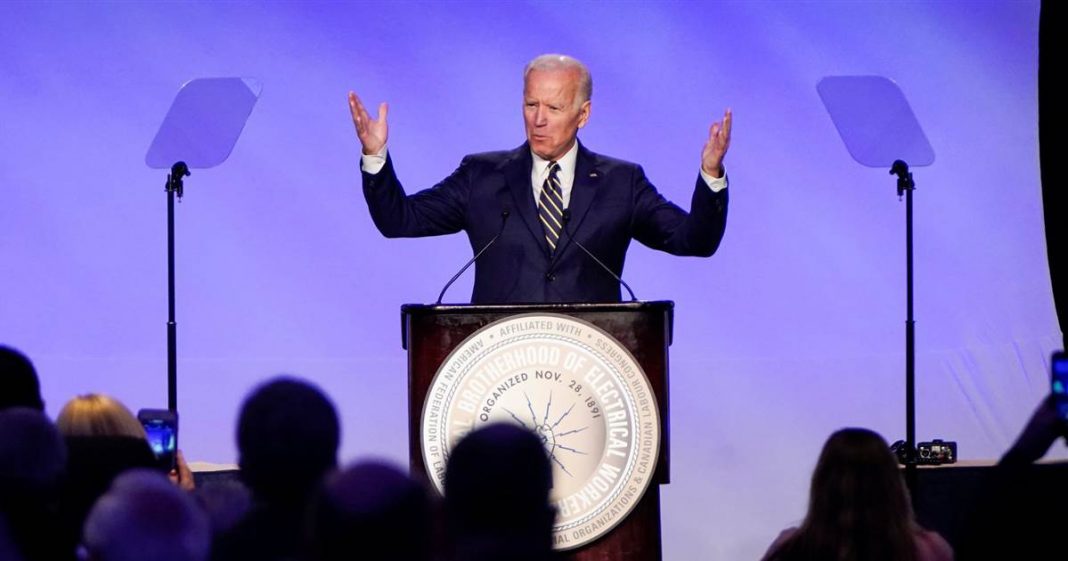 Joe Biden is attempting to deal with his “personal space” problem.

Less than two days after he promised to be more respectful with his physical contact — as part of an effort to tamp down a growing controversy — the former vice president cracked jokes about the issue.

At a speech to the International Brotherhood of Electrical Workers’ conference in Washington, D.C., Biden opened his remarks by joking that he’d received permission to hug the group’s president, Lonnie Stephenson, whom Biden had embraced after being introduced by him.

“I just want you to know, I had permission to hug Lonnie,” said Biden, who is said to be gearing up for a presidential run.

The line drew applause and laughter from the crowd.

Later, during another point during his speech when there were children on stage, he put his arm around a young boy — and made another joke.

“By the way, he gave me permission to touch him,” the former vice president said.

Biden’s speech Friday was his first public appearance since allegations emerged from several women who say he made them uncomfortable. Last week, Lucy Flores, a former Democratic nominee for Nevada lieutenant governor, said Biden made her feel uncomfortable by smelling her hair and kissing her head at a 2014 campaign rally. In addition, six other women have come forward with their own allegations of encounters with Biden that they said made them feel the same way.

None of the women who have come forward have alleged Biden made overt sexual advances, and other women have stepped forward to defend the former vice president, saying they found similar physical interactions with him to be comforting or supportive.

“To make light of something as serious as consent degrades the conversation women everywhere are courageously trying to have,” Flores told CNBC.

After his speech on Friday, Biden told reporters that he “wouldn’t be surprised” if more women came forward with similar allegations, but that he would not apologize for his “intentions.”

On Wednesday, Biden had posted to Twitter a two-minute video in which he said “social norms are changing,” and that what he viewed as “gestures of support and encouragement that I’ve made to women and some men” have sometimes made them uncomfortable.

“I get it, I get it. I hear what they’re saying. I understand it. And I will be much more mindful. That’s my responsibility,” he said.

Adam Edelman is a political reporter for NBC News.