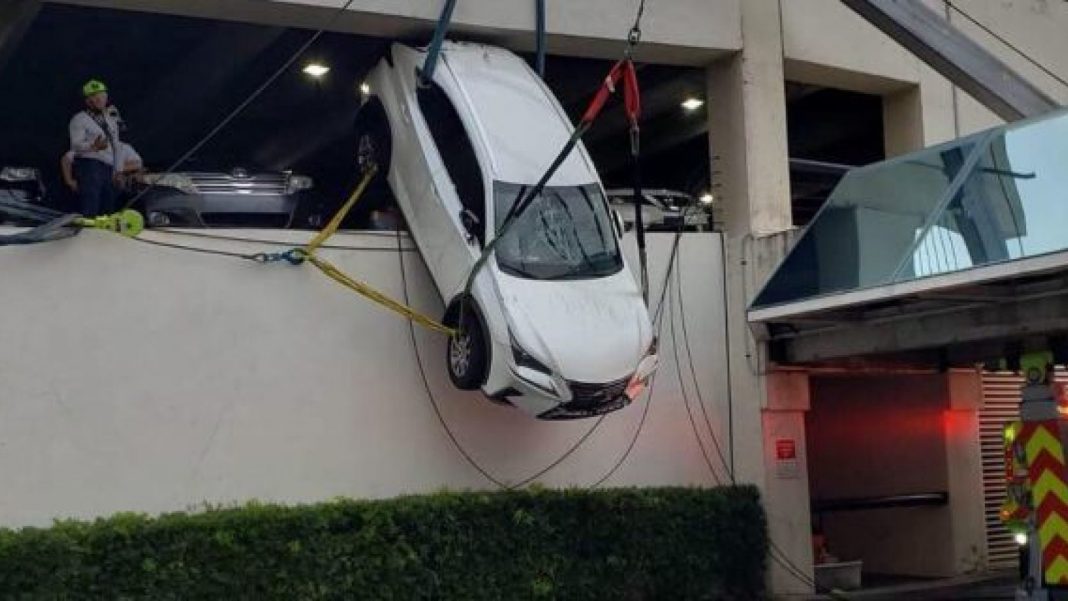 A woman in Florida was rescued from an SUV that was dangling from the second story of a parking garage.
(MIami-Dade Fire Rescue)

A woman was rescued Thursday from an SUV that had been dangling on the side of Florida parking garage for nearly an hour.

The Miami-Dade Fire Rescue crews responded to the second story of a parking garage in Miami Springs at around 4:25 p.m. Thursday, by which time authorities said the vehicle – a white Lexus SUV – was within inches of falling to the concrete driveway below.

And the driver was trapped inside.

Authorities said the SUV was precariously hanging from the side of the parking garage.
(Miami-Dade Fire Rescue)

“A very precarious position, the vehicle was wedged by a few inches of metal on the hatch top,” MDFR Chief Danny Cardeso told reporters. “That was the only thing that kept it from falling.”

FLORIDA AUTHORITIES SEEKING DRIVER WHO ALLEGEDLY STOPPED FOR PERSON CROSSING, THEN HIT THEM WITH CAR

Authorities said the SUV crashed through steel cables anchored to the walls of the parking garage.

Rescue workers were able to secure the vehicle and free the driver, who was treated at the scene.

Fire rescue crews were able to secure the vehicle and get the driver out of the SUV.
(Miami-Dade Fire Rescue)

“It took us about 45 minutes to secure the vehicle before we were able to safely remove the occupant,” Cardeso said. “She did not say exactly how it happened, so we do not know what happened at this point.”

No one else was injured, authorities said.