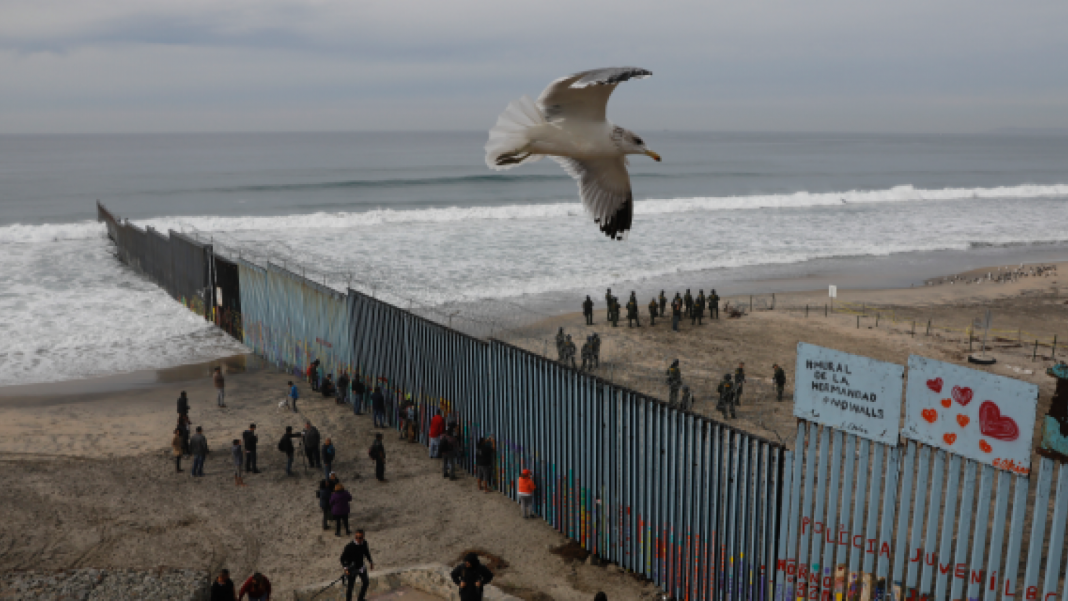 FILE – In this Dec. 10, 2018, file photo, people look on from the Mexican side, left, as U.S. Border Patrol agents on the other side of the U.S. border wall in San Diego prepare for the arrival of hundreds of pro-migration protestors, seen from Tijuana, Mexico. The southern border is nearly 2,000 miles long and already has about 650 miles of different types of barriers, including short vehicle barricades and tall, steel fences that go up to 30 feet high. (AP Photo/Rebecca Blackwell, File)

CALEXICO, Calif. – President Donald Trump is visiting the border on Friday to tour a recently built portion of fence that he is holding up as the answer to stop a surge of migrant families coming to the U.S. in recent months.

The White House says it’s the first section of his proposed border wall to be built, commemorated with a plaque bearing his name and those of top immigration and homeland security officials.

The new fence that Trump is touring is a two-mile section that was a long-planned replacement for an older barrier. It is one of a handful of current projects that total $1 billion to replace existing barriers and build new ones across the border.

Here are questions and answers about the various barriers along the border and those that are in the works as Trump attempts to carry out his signature campaign promise.

WHAT HAS TRUMP DONE?

Trump has yet to complete any new mileage of fencing or other barriers anywhere on the border. His administration has only replaced existing fencing, including the section he is touring Friday.

Construction for that small chunk of fencing cost about $18 million, began in February 2018 and was completed in October. Plans to replace that fence date back to 2009, during the beginning of former President Barack Obama’s tenure.

Contractors have been doing site and preparation work for 13 miles of barriers in the Rio Grande Valley that will be Trump’s first new fencing. The administration said construction could begin as early as this week. The administration is also in the process of replacing 14 miles of fencing around San Diego.

“The wall is under construction, by the way, large sections. We’re going to be meeting, I think on Friday, at a piece of the wall that we’ve completed, a big piece, a lot of it’s being built right now,” he told reporters Thursday. “It’s moving along very nicely. But we need the wall.”

WHAT ABOUT THOSE PROTOTYPES?

Early in his term, Trump called for prototypes of border walls that were built in the San Diego area at a cost of about $300,000 to $500,000 each. Eight prototypes went up, and Trump traveled to the border to inspect them last year.

But they were demolished in February. The nearly $3 billion that Congress provided for barriers during the first half of Trump’s term requires the money be spent on designs that were in place before May 2017, which meant the prototypes couldn’t be used.

The prototypes became a spectacle at various times since Trump took office, drawing tourists, protesters and artists who projected light shows on the walls from Mexico.

WHAT ABOUT THE NATIONAL EMERGENCY?

Trump shut down the federal government for more than a month — the longest shutdown in U.S. history — and later declared a national emergency to free up billions of dollars to build his wall. Congress had voted to block the emergency declaration but Trump vetoed the measure.

Several organizations brought lawsuits over the declaration, and House Speaker Nancy Pelosi said Thursday that Democrats also planned on suing to prevent Trump from “stealing” money from federal programs and diverting the money to build a wall.

But the national emergency money has not yet been spent in part because the government has to first spend existing border wall funding. A lawsuit could eventually derail the plan.

Still, various plans for more border barriers are moving along.

Last month, the Department of Homeland Security requested that the defense department build 57 miles of 18-foot fencing near Yuma, Arizona and El Paso, Texas, which have seen enormous increases in the number of border crossers, especially families.