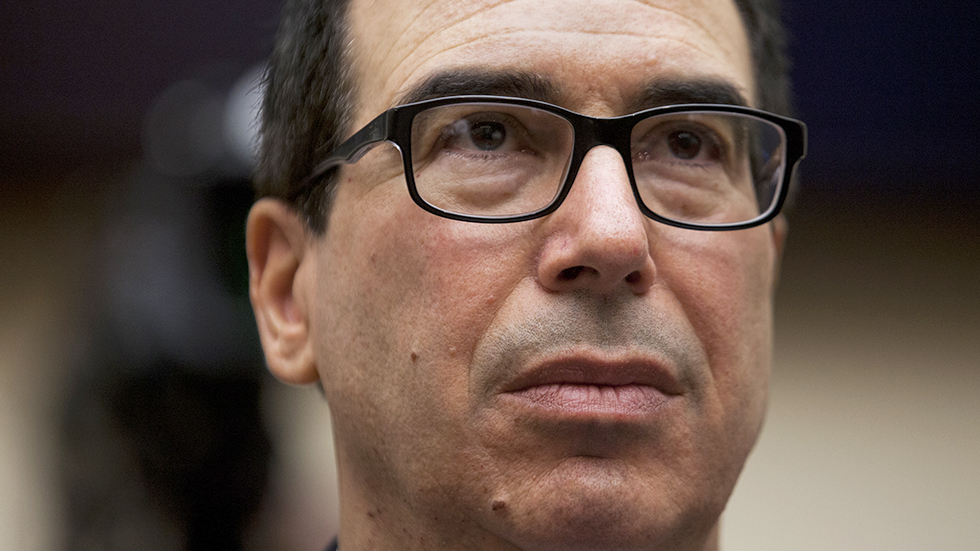 Donald John TrumpGroups ask judge to halt border wall construction Trump on Barbara Bush criticism: ‘Look what I did to her sons’ Man charged for throwing water balloons at Trump crowd: ‘I did what I had to do’ MORE‘s tax returns.

Mnuchin has been one of Trump’s most loyal Cabinet members, defending the president’s policies and personal conduct when others have shied away.

Now as the president’s chief line of defense he will have to balance his loyalty to Trump against a request that many experts say leaves him little wiggle room.

“[The] request tests Mnuchin’s oath of office: Whether Mnuchin will faithfully execute the laws of the United States, or whether Mnuchin will bend to the will of the president,” said Steve Rosenthal, a senior fellow at the Urban-Brookings Tax Policy Center who testified before Congress in February about the need to request Trump’s tax returns.

Richard Edmund NealHouse Budget Republican says Dems request of Trump tax returns is attempt ‘to weaponize’ tax code White House spokesman: Dems using ‘tired tactics’ in calling for Trump’s tax returns Fox’s Napolitano: Trump’s ‘audit’ argument ‘would not be a defense’ for tax return request MORE (D-Mass.) Wednesday evening sent IRS Commissioner Charles Rettig a request for six-years worth of Trump’s personal and business tax returns. Neal made the request under a part of section 6103 of the federal tax code that states that the Treasury Secretary “shall furnish” tax returns to the chairmen of Congress’s tax committees upon written request, so long as the documents are viewed in a closed session.

Trump — the first president in decades to not voluntarily disclose any of his returns — quickly indicated his dislike for the request.

“Until such time as I’m not under audit I would not be inclined to do that,” he said Wednesday.

When asked Thursday if he would direct the IRS to not disclose his returns, Trump said, “They’ll speak to my lawyers and they’ll speak to the attorney general.”

As head of the department that includes the IRS, Mnuchin will face pressure from Trump and congressional Republicans to push back on Democrats’ request.

Key Republicans are critical of the request. The top Republican on the Ways and Means Committee, Rep. Kevin Brady

Kevin Patrick BradyDems formally ask for Trump’s tax returns Bipartisan IRS reform bill heads to House floor Congress may pass retirement reforms that are bipartisan. But they need to go further MORE (R-Texas), argued in a letter to Mnuchin Wednesday that the request is “an abuse of the tax-writing committees’ statutory authority,” and he said it weakens Americans’ right to have their personal information kept private.

“They don’t have a purpose,” he said. “All they have are a lot of excuses.”

Mnuchin said at a Ways and Means Committee hearing last month that Treasury would “follow the law and we will protect the president as we would protect any individual taxpayer under their rights.”

Treasury has not commented on the tax returns request since it has been issued.

Trump has often publicly criticized members of his administration, but Mnuchin has avoided his wrath.

Mnuchin has been a fierce Trump loyalist and advocate for his agenda, supporting the president’s positions and controversial comments even when they differ from his own views.

The former Goldman Sachs banker and Hollywood producer served as Trump’s campaign finance chairman and an economic adviser before he was tapped to lead the Treasury Department.

Mnuchin, a business-friendly Republican, shared Trump’s support for cutting taxes and loosening bank regulations, if not his protectionist trade policy.

But while top White House officials say Mnuchin has expressed deep concerns about Trump’s tariffs behind closed doors, he’s supported the president’s trade agenda in public and in negotiations with Chinese counterparts.

Mnuchin also proved his loyalty amid backlash to Trump’s response to violent white nationalist rallies in Charlottesville, Va., in 2017.

When the president faced an uproar for blaming “both sides” after deadly clashes between white nationalists and counterprotesters, Mnuchin, who is Jewish, insisted the president was not racist and did not sympathize with Nazis.

His response was a far cry from that of his Jewish colleague, former National Economic Council Director Gary Cohn

Though Mnuchin is one of the few Cabinet officials to stay mainly on the president’s good side, Trump has fumed at the secretary for recommending Federal Reserve Chairman Jerome Powell. Trump has blamed Powell for hindering the U.S. economy by presiding over four interest rate hikes and has called the Fed the “greatest threat” to American economic growth.

Democrats who have criticized Mnuchin’s role in advancing Trump’s agenda say the IRS, not the Treasury secretary, should be handling the tax-return request.

The statute in question mentions the Treasury secretary. But Neal’s office said in a “Frequently Asked Questions” document that the chairman sent the request to Rettig because the IRS typically handles requests under section 6103 and the Treasury Secretary has delegated the administration and enforcement of tax laws to the IRS.

Both Mnuchin and Rettig are scheduled to testify at congressional hearings next week, and lawmakers are likely to press them about their response to Democrats’ tax-return request.

Democrats and supporters of the request say there’s no good reason for the administration to not comply.

They are critical of Republicans’ privacy concerns, arguing that there’s a difference between requesting the president’s tax returns and those of others. They also note that Neal’s request was limited to six years of documents and only requested the returns of eight of Trump’s business entities, and that Neal explained his request as necessary to see if the IRS is properly following its policy of auditing presidents.

“Congress overseeing the IRS and how they audit the president is at the heart of Congress’s oversight responsibilities,” said Seth Hanlon, a senior fellow at the Center for American Progress.

Democrats also took issue with Trump’s comments about not providing his returns while under audit, arguing that the statute under which they requested the tax returns doesn’t leave the matter up to him.

“With all due respect to the President, we did not ask him for the tax returns, we asked the commissioner of the IRS,” Rep. Dan Kildee

Republican strategists predict that Mnuchin will get involved, and that it will be an easy decision for him to reject Democrats’ request.

“You’ve never seen a Cabinet Secretary at that level not fight for the administration,” said GOP strategist Ford O’Connell. He predicted that Mnuchin’s likely to let the issue end up in the courts.

The pressure from conservatives to defend Trump will likely be intense.

Americans for Tax Reform President Grover Norquist said that Mnuchin should emphasize that tax data should be private information.

“It’s an outrageous request and he works for the president,” he said.