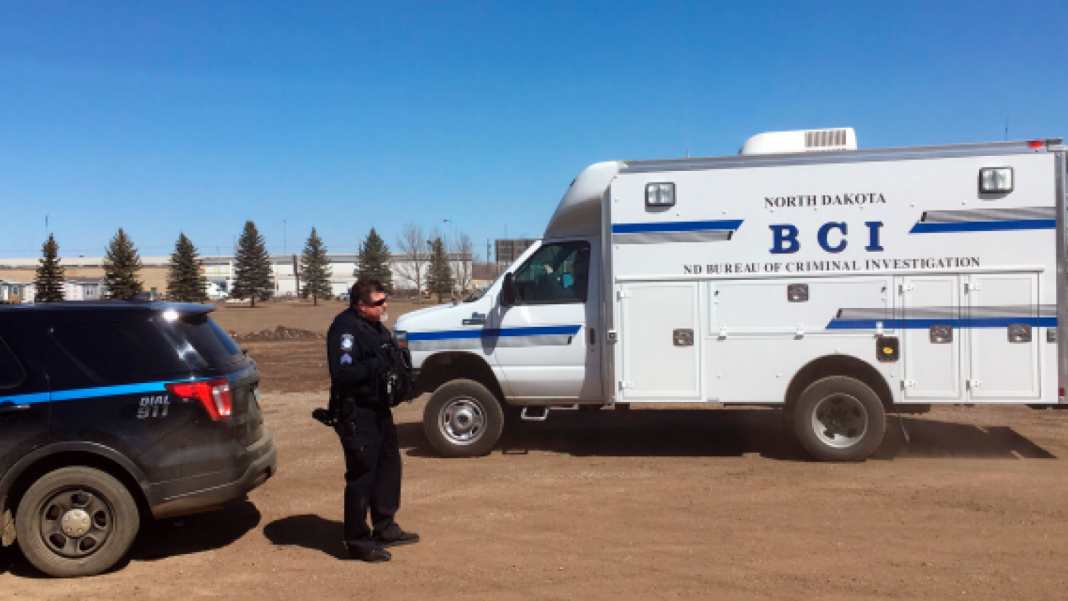 MANDAN, N.D. – A 44-year-old man was arrested Thursday in the slayings of four people who were shot or stabbed earlier this week at a property management business, police said.

Chief Jason Ziegler said surveillance video identified a vehicle of interest and helped lead them to the suspect, who lived in the small town of Washburn about 35 miles (56 kilometers) north of Mandan.

Ziegler said a motive for the killings wasn’t yet known. He said the suspect lived in a mobile home park owned by the business, RJR Maintenance and Management. He was arrested without incident.

The man was being held on four counts of felony murder, Ziegler said, with a court appearance likely Friday.

Deputy Chief Lori Flaten confirmed earlier Thursday that a search conducted Wednesday in a field about half a mile from the business was related to the investigation. She said state and local police at the scene were “looking for potential evidence,” but she didn’t elaborate.

The bodies of an owner and three employees were found early Monday at RJR Maintenance and Management in Mandan, a city of 22,000 people just across the Missouri River from the state capital of Bismarck. Police haven’t said how the four were killed or publicly suggested a possible motive. But they said the attack “was specific to the victims,” and they didn’t feel the public was in danger.

Earlier Thursday, police declined to release details of a 911 call that alerted authorities to the slayings. The Associated Press and other media outlets asked for audio and a transcript of the 911 call, but police denied the requests, citing a provision of the state’s open records law that allows authorities to withhold such information during an active investigation.

The company’s website says it has handled commercial and residential properties in the area for more than 20 years. Its services include collecting rent for landlords, paying mortgages, re-renting apartments, building and grounds maintenance, lawn care and snow removal. It also rents out storage units.

The RJR building is somewhat isolated despite its location in a business district near a busy main road known as The Strip. A large empty lot sits in the front, a golf course in back and a soccer complex to one side.

Mandan had not had a homicide since November 2016, and had only three in the past six years. In that time period, neighboring Bismarck, which has about 73,000 residents, had seven homicides.