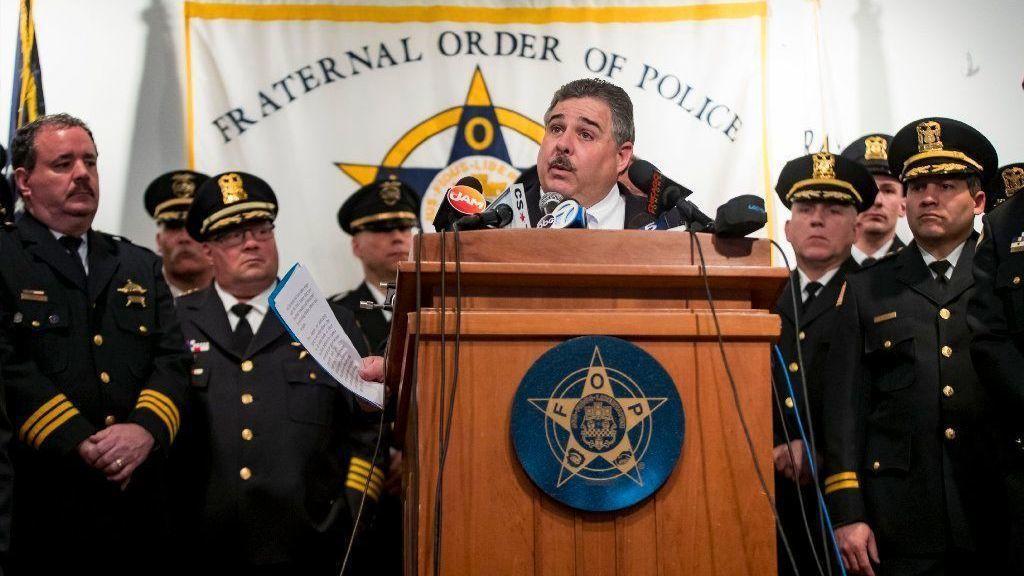 A group of suburban police chiefs joined with the Chicago Fraternal Order of Police to give Cook County State’s Attorney Kim Foxx a vote of no confidence Thursday in the latest fallout over her office’s abrupt dismissal of charges against “Empire” actor Jussie Smollett.

FOP President Kevin Graham and some 30 suburban police leaders took it a step further at a news conference, calling on Foxx to resign from her elected office.

“People standing around me can give you countless examples of how Ms. Foxx’s lack of prosecution has cost our members and police officers … an enormous amount of problems,” Graham said. “Not to mention the fact that the people in Cook County are depending on prosecutors to put people in jail and charge them accordingly.”

Foxx’s office issued a brief statement on her behalf that defended her record and hinted that she would not resign and planned to seek re-election.

“I was elected by the people of Cook County to pursue community safety, prevent harm, and uphold the values of fairness and equal justice,” Foxx said in the statement. “I’m proud of my record in doing that, and I plan to do so through the end of my term and, if the people so will it, into the future.”

He expressed frustration that Foxx’s office dropped murder charges against Gabriel Solache and Arturo Reyes in late 2017 after a judge threw out their confessions.

Kim Foxx: I welcome an outside review of how we handled the Jussie Smollett case »

At the time, however, Foxx’s then-top assistant said the office still believed the two had fatally stabbed a couple in their Bucktown neighborhood home in 1998 but had no choice but to dismiss the charges after the judge discredited testimony by retired Detective Reynaldo Guevara

Since mid-2016, in fact, at least a dozen convictions tied to Guevara have been thrown out of court because of allegations the former detective beat suspects and coerced confessions.

Graham also took issue with what he said was the difficulty of obtaining charges from Foxx’s office against people who attack police officers.

“We need to have a prosecutor who is going to charge people when they commit a crime,” he said. “If there’s no charges and nobody goes to jail, then obviously the law doesn’t mean anything. … That’s a problem.”

Foxx has faced a firestorm of criticism after her office dismissed a 16-count felony indictment against Smollett without the actor acknowledging guilt during an unannounced court hearing last week. He was accused of staging a racist and homophobic attack on himself in downtown Chicago.

With Foxx stumbling over her handling of the Smollett case, the police chiefs — and others — are clearly seizing on an opportunity.

The clash with police chiefs who favor a tougher stance on nonviolent crime is not surprising since the African-American state’s attorney won election in 2016 as a reform candidate, unseating incumbent Anita Alvarez in the Democratic primary with promises of sweeping change.

Her office has backed reform of the cash bond system to ensure nonviolent detainees who can’t post small amounts of money don’t languish in jail, moved to deprioritize certain nonviolent crimes such as shoplifting and halted prosecutions of people accused of driving on licenses that have been suspended or revoked for financial reasons — such as failure to pay child support, tolls or parking tickets.

In giving Foxx a vote of no confidence, the North Suburban Association of Chiefs of Police cited the Smollett case but attacked Foxx on a broader front for what it alleged was her office’s failures to more generally “hold offenders accountable.”

“It appears your strategy to address non-violent crime in Cook County is to decriminalize or ignore it, regardless of any collateral cost which is born overwhelmingly by individual communities and their police agencies,” said the letter from the group representing more than 30 police departments in the north and northwest suburbs.

In its letter to Foxx addressed Monday, the north suburban chiefs group criticized the policy changes on shoplifting and traffic offenses as well as the office’s more recent decision not to prosecute marijuana cases.

“These decisions add to the continuing resource burden on police agencies,” said the letter, written by Duane Mellema, the group’s president and deputy police chief of Park Ridge. “We continue, as we are required, to investigate and make arrests for these offenses for which accountability and deterrence are greatly diminished.”

The letter went on to suggest that Foxx’s policies are affecting officers’ ability “to reduce and deter criminal activities.”

“The fact that you and your staff have made these decisions without consultation with our departments undermines any statement you have made that the Cook County state’s attorney’s office is working with us to maintain safe, crime free communities.”

Mellema called the Smollett case “the latest and most egregious example” of Foxx failing to hold criminals accountable for their actions.

Chicago police “diverted significant resources, and a substantial portion of a limited overtime budget to build this case with your staff,” he wrote. “To have the charges dismissed with no explanation and a sealed court file shows a lack of respect for the professionals you work with.”

The letter also criticized the felony review process — when assistant state’s attorneys work with police to decide whether charges should be brought — under Foxx, saying prosecutors often give “contradictory guidance” to suburban police departments and are often not responsive to their questions.

As a result, the letter said, “Our officers must explain your decisions not to prosecute to our local victims.”

Smollett, who is African-American and openly gay, has said he was walking from a Subway sandwich shop to this apartment in the 300 block of East North Water Street about 2 a.m. Jan. 29 when two men wearing masks attacked him, shouted racial and homophobic slurs and placed a noose around his neck.